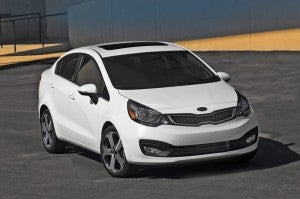 If you add up the numbers 2, 0, 1 and 2, you’ll come up with 5. The number five in certain ancient Far Eastern cultures signify change. And 2012 is perhaps the best year yet to consider changing that tired old jalopy in the driveway for something new, exciting, safer and more enjoyable to drive. And it’s fitting because in the last five years, the market has grown to new heights, but more importantly, as a sign of an ever-evolving and maturing market, traditional segments have been shrinking and are slowly being replaced by more niche-specific vehicles that cater to more specialized needs. Gone are the days where you had to choose between brands A, B and C, and their respective x, y and z models, in black, white, green and maroon.

In the small car/hatchback market, two significant new entries will be KIA’s all-new Rio, available in both sedan and hatchback, which will really give more options to new car-buyers. Representing the other H-brand is Hyundai’s new Accent hatchback, powered exclusively with a diesel engine, and a sedan variant also featuring diesel power. Hyundai has a winner here as a small car with diesel power means fast, fun and fuel-efficient motoring, and lower overall running costs. Mitsubishi, having made a huge comeback in recent years, thanks to their diesel-packed power-punch of the Strada and Montero Sport, has also unveiled a close-to-production small car, the new Mitsubishi Mirage 5-door hatchback powered by a new 3-cylinder engine with 1 to 1.2 liters of displacement. Expect it to make an appearance by the 3rd quarter of this year, a year after its unveiling at the Tokyo Motor Show 2011. The revival of the Mirage moniker should also bring a bit of warmth and nostalgia to a generation that grew up riding their mum’s and dad’s small cars a generation ago. Not to be outdone, rumors are circulating that the all-new Toyota Yaris 5-door hatchback might be released soon as it’s been available in foreign markets since this year. The new Yaris features a longer wheelbase with a bigger boot to help ride comfort and increase practicality and cargo space. But another source said the Yaris will remain the same, with only a minor change for next year while foreign markets enjoy the new Yaris. Sad but a very real possibility. What is sure is that an all-new Avanza is coming out in January of 2012. That should help people in need of a budget people-mover. Honda, on the other hand, is rumored to give its baby executive-looking car, the City, a minor change/face-lift as it bravely soldiers on.

Moving to the next, C-segment class vehicles, Ford’s all-new 3rd generation Focus and Honda’s much-awaited 9th-generation Civic lead the way. While Honda’s unveiled the Civic in other markets, and Ford’s started selling the Focus in Europe, its home market, it is unclear when exactly these two sedans (and hatchback for the Blue Oval) will make a grand entry in the ASEAN market, specifically in the Philippines. Honda’s been having troubles of late, but hopefully a new Civic model will revive interest in the brand as it soldiers on without a single diesel-powered vehicle, precisely what the Philippine market is soaking up and consuming as much as it can. Ford’s unofficially hinted that the Focus can be out as early as end of 1st quarter to start of 2nd quarter next year, but has also hinted that there are other models that might come out first before the new Focus goes on sale. Mitsubishi also plans to release a new Lancer variant that should wreak havoc on the B- to C-class segments as an unconfirmed source has said that it will straddle the budgets of low-end C-segment shoppers with the high-end side of B-segment shoppers. Subaru’s new Impreza sedan has been making impromptu Internet appearances over the past few months. A launch is expected toward the end of 2012. The big news is that the top-model, fire-breathing STI super rally-rep sedan will go the way of the Skyline GTR, i.e., the STI will be its own special model, not linked to the Impreza line-up so as not to be constrained by the limitations of an essentially mass-market econobox. Lastly Mazda’s also coming out with an all-new Mazda 3 sedan, which has had fans waiting patiently for a long time as the sporty Mazda 3 has found new friends since its launch years ago and has enjoyed a strong following since.

The pick-up market is heating up as well with Ford and Chevrolet brawling out wild next year with the Colorado pick-up from the bow-tie boys, and the Blue Oval’s mouth-wateringly impressive Ford Ranger and its brutish 3.2 liter 5-cylinder turbocharged engine. The Americans invented the pick-up, the ASEAN market evolved it into something more fitting for our tight, poorly surfaced roads, and the Americans have decided to show us Asians how it should be done, even for our market. Something the established Japanese truck-makers should definitely be worried about. Diesel-powerhouse Isuzu has also released an all-new D-Max pick-up replacement in Thailand, but the prospects of it coming into our country this 2012 seems bleak if some industry insiders are to be believed. Hopefully Isuzu changes its mind and brings them in pronto!

In the premium small-car market, Mercedes-Benz has announced that a new B-Class 5-door hatchback will be introduced sometime next year, following in the heels of BMW’s successful 1-Series launch just a few weeks back. The two German marquees are joined by Audi, which has just very recently started selling the new Audi A1, plus an all-new cross-over vehicle, the Audi Q3, pitching itself directly against BMW’s X1.

One class up, and yuppies around the world should rejoice as BMW, through local importer Asian Carmakers Corp., has said that an all-new 3-Series will break ground sometime in 2012. The 3-Series has always been the dream machine of aspiring professionals climbing up the corporate ladder. The new 3-Series should hopefully take the fight to Audi’s A4 and Merc’s recently face-lifted C-Class, currently the sales leader in the segment, and Lexus’ own IS sports sedan.

Speaking of Lexus, an all-new GS sedan should also break cover sometime soon and, with it, a hybrid variant propelling the 6-cylinder GS into V8 territories of oomph. Hopefully the new GS will have bigger rear legroom, the primary complaint of potential buyers in that segment. It’s a rare sedan, in a segment overcrowded with German marquee models. Accompanying the new GS sedan is a GX SUV, this one a true-off-road/all-conditions biased mid-sized SUV, the sparring partner of Lexus’ own RX, which caters more to suburban rich wives and smoothly paved roads. Mercedes Benz is also releasing an all-new ML SUV, and Chrysler’s also releasing a new Durango variant, and possibly new Jeep models and variants as well.

In the entry-level sports car segment, things are also heating up as Subaru has drawn first blood by unofficially/officially announcing that the 2-door RWD BRZ, which has been making the major car show rounds world-wide, might make it to our shores before mid-2012, possibly in the 2-million segment. Co-developer and part-owner Toyota has been careful to make any announcements of its availability, but hopefully we’ll see the GT-86 variant as well, by the 2nd half of 2012 if sources are to be believed. A face-lifted Hyundai Genesis coupe, with engines now equipped with direct petrol injection will surely heat things up as the 210hp 2.0 turbo variant gets a hike up to as much as 270hp, and the 313hp V6 will rise up to as much as 340hp if rumors are to be believed. Unfortunately, no word yet on whether the Veloster sports-coupe cum cross-over SUV will make it to our shores. An Azera executive sedan, slotting right above the Sonata, is also rumored to appear next year, giving you  more choices in the segment dominated by the Camry, Honda’s Accord and, lately, Nissan’s Teana and Subaru’s sports-sedan biased Legacy. The US market just received a new Camry. The ASEAN Camry is quite different from the US-Spec one, but it seems logical that a new ASEAN Camry might be on its way soon as well? Hopefully we’ll see a new one by the 2nd half of 2012 as well.

Going up the premium ultra-luxury segment, Porsche’s all-new 911 sports car (code-named Type-991) will soon hit our shores as early as Q1, followed sometime later in the year with an all-new Boxster drop-top roadster. The Boxster hasn’t been as popular in the country, buyers preferring the full-monty experience of a 911, but nonetheless the Boxster should be a thrilling drive under the glorious summer sun. Big news has to be the launching of the Lamborghini brand in the Philippines, with the local PGA-backed outfit bringing in a string of Gallardos, plus rumored two units of the Aventador LP700-4 (one of which is here already) and four units of the amazing Gallardo LP570-4 Super Trofeo Stradale, which is limited to just 150 units worldwide. But the Prancing Pony is not to be outdone as local importer Formula Sports has begun accepting orders for the amazing Ferrari F458 Italia Spyder, the Modenese sports car and Formula 1 legend’s best compact sports car in ages.

The other important questions in enthusiasts and armchair experts’ minds is, what other brands are entering our country soon? Who is finally bringing in Volkswagen? Will FIAT really enter our market and whip out the fantastic 500? And rumors persist that Cadillac should also enter the local market, but who will bring it in? And what about Bentley, the last luxury marquee owned by Volkswagen that is yet to be represented in our country?

Much of this is speculation as nobody’s wanted to officially confirm much at all. But one thing’s for sure, next year’s car choices will be better, hotter, more exciting and more competitive, better for all of us car-buying public!