‘Land on Water’ by MAST

This week, representatives of various governments and organizations—consisting of environment advocates and pro-fossil fuel lobbyists—will meet for the United Nation’s COP 27 in Egypt.

As in past years, they will review, reaffirm, or strengthen their pledges on reducing carbon emissions in their respective countries. The annual conference is held as the Philippines recovers from yet another recent climate catastrophe (Typhoon Paeng). The fate of vulnerable countries like the Philippines—ranked highest in disaster risk worldwide in the 2022 World Risk Report—rests on the decisions and actions that wealthy nations and influential organizations will make next week.

Adaptation as a recourse

We have long crossed the point where climate change could be averted as it is already upon us. Adaptation would now be the recourse of vulnerable cities while the world ponders how to decarbonize society to avoid global catastrophic climate disaster.

With 60 percent of our population living in coastal areas and with sea level rise in the Philippines being higher than the global average, our vulnerability is not difficult to imagine. And yet, more people are moving to coastal cities, putting even more settlements and livelihoods at risk.

Reducing human and economic costs of sea level rise would suggest settling farther from coastal areas. However, the opposite is occurring worldwide.

Some approaches to adapt to rising sea levels involve structural mitigation using engineered interventions such as sea walls, levees or reclamation. These approaches are capital- and material-intensive and tend to go against the more restorative, nature-based solutions to climate adaptation.

Methods such as coastal reclamation also tend to isolate shoreline communities from their livelihoods, creating a form of ecological gentrification wherein original settlements are displaced by the affluent. It can thus be argued that structural mitigation is a form of resilience that favors the wealthy.

There are, however, some examples of more light-handed and community-based adaptive measures wherein many vulnerable ecological communities persist or even thrive without the heavy-handed, “global design best practice” methodologies that are used elsewhere.

Bangladesh is one such example. Also highly vulnerable to climate change, some experts predict that by 2050 about 20 percent of the available land in the country will be permanently submerged under water. During the monsoon season, farmlands in southern Bangladesh become flooded and remain inundated for several months, affecting agricultural production and livelihood.

Local resilience and the zeal to adapt to changing climate have led some farming communities to revive a tradition of building “floating farms”. It is an age-old technique of hydroponics in which vegetables are planted on rafts made of aquatic weeds that rise and fall with the floodwaters.

This has enabled communities to survive and have enough food throughout the year despite the loss of land. Some experts claim that the productivity of this farming system is 10 times higher than traditional land-based agricultural production in the southern Bangladesh.

This soil-free method of cultivation is being used even in Mexico City, where some communities have revived the ancient Aztec farming technique using man-made, island-farms. 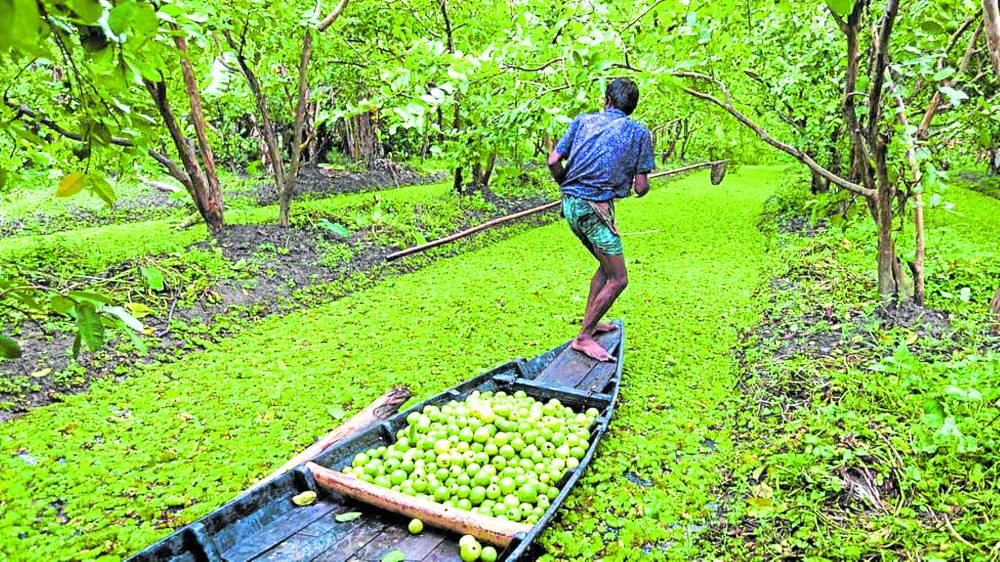 Living on water has also been adapted by some communities and promoted by some designers as a way to cope with gradually rising sea levels.

Some low-lying areas of Europe, for instance, have adopted a climate-adaptive strategy that uses floating structures that are resistant to storms. An example is Schoonschip, a floating village of 46 houseboats designed by Space & Matter. The system of building “land on water” developed by MAST utilizes reinforced upcycled plastic arranged in modules to form the floating foundation for the structures on top.

Apart from climate adaptiveness, these communities have to be energy and water autonomous by necessity due to the absence of pipe connections to the mainland. Thus, they generate their own power from sun, wind or waves and source their water from harvested rainwater, solar desalination or captured humidity. Modern as these designs may be, they are anchored on older typologies of coastal living.

While many, even among the climate-anxious, may be skeptical about living on water, the above are examples of community-based, adaptive measures by those who are already feeling the impacts of sea-level rise.

They point to an alternative model for resilience that draws from traditional knowledge and local experience. It is a way to reconcile the conflict between addressing coastal precarity and creating real estate for coastal development.

Floating villages, if combined with floating agriculture, can be circular micro-environments that are net zero energy, net zero water, net zero waste and net zero carbon while concurrently avoiding the gentrification of our shores. They have the potential to connect built systems with the natural systems and our social systems, enabling the feedback loops necessary for adaptation.

But perhaps their biggest impact will be terrestrial—once we have learned as a society to live lightly on water, then perhaps would also have learned how to let the land heal.

The author is founder and principal of JLPD, a masterplanning and design consultancy practice. Visit www.jlpdstudio.com