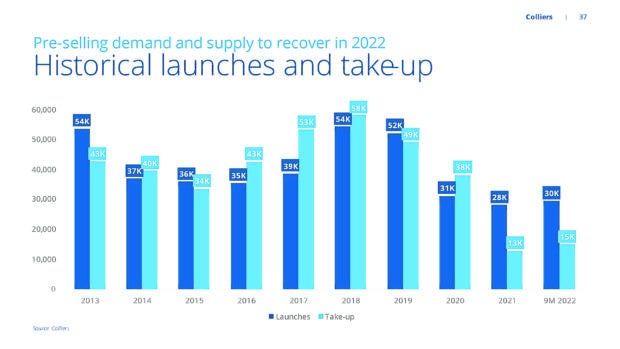 Of the market segment, mid-income and luxury projects are likely to remain resilient for the remainder of 2022.

Metro Manila’s pre-selling condominium market is gradually recovering as shown by an improvement in the net take-up (demand) and project launches (supply).

In terms of supply, the Bay Area will continue to dominate and will likely have the largest stock by 2024, while local and foreign employees returning to traditional office spaces will fuel the demand for condominium units for lease in key business hubs. Colliers thus retains its forecast of a gradual recovery in condominium rents and prices starting 2023.

Colliers Philippines believes that developers need to continue implementing attractive flexible payment terms given the substantial number of ready-for-occupancy (RFO) units in the market. Stakeholders should continue to monitor interest rates and their impact on mortgage rates. Property firms should also continue assessing attractive price segments in various sublocations across Metro Manila as these will guide developers with their launches as they maximize market recovery postpandemic. 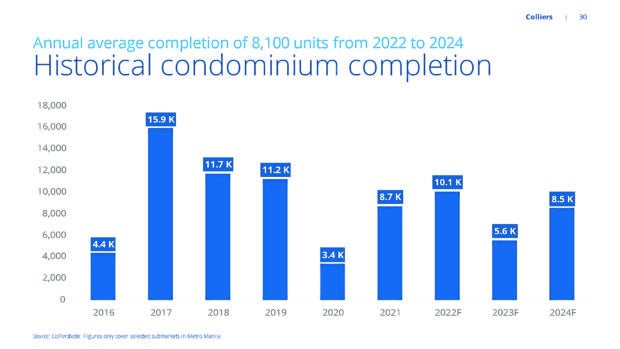 Colliers believes that the imposition of higher interest rates by the central bank will likely result in increased mortgage rates. In September, the Bangko Sentral ng Pilipinas has raised the benchmark interest rate to 4.25 percent from 3.75 percent the previous month to temper the impacts of inflation. Meanwhile, average bank mortgage rates also rose to 7.8 percent in the third quarter from 7.3 percent in the previous quarter.

Colliers encourages investors to actively monitor interest and mortgage rates, as these can strongly influence the viability of residential investment. Interest rates should guide developers with their promos and payment schemes.

In the first nine months, the luxury segment (P8 million and above) accounted for 28 percent of total condominium take-up, an improvement from the -1.6 percent posted in the same period last year. Take-up was driven by projects in major central business districts (CBDs) such as Fort Bonifacio and Ortigas. Colliers believes that the ultra luxury segment will likely remain resilient amid rising interest and mortgage rates.

Vacancy in the secondary residential market continues to hover above 17 percent. With the substantial inventory in the secondary market, developers should be proactive in offering early move-in promos and rent-to-own schemes for RFO projects. A couple of developers are even allowing buyers to move-in with a down payment as low as 5 percent, and discounts of as much as 20 percent on total contract prices.

Colliers recorded the delivery of 3,714 new units in the third quarter, following the completion of projects in Fort Bonifacio and the Bay Area. This is the highest recorded quarterly completion since the first three months of 2021. Colliers thus retains its projected delivery of 10,100 units in 2022 as developers’ construction schedules are still on track this year. 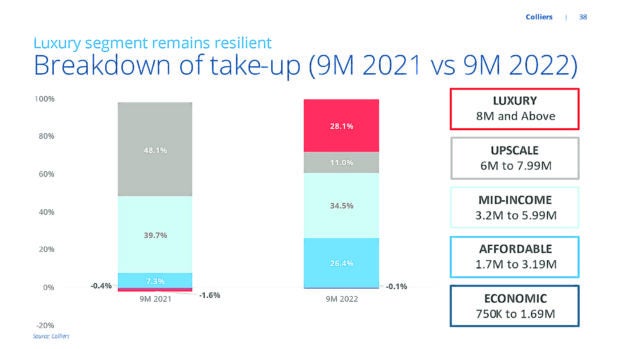 Take-up of pre-selling condominium projects reached 6,100 units in the third quarter, up from the 5,700 units sold in the second quarter. This brings to 14,900 units the total take-up in the first nine months of 2022, already outpacing full-year 2021 figures. In 2021, we recorded anemic take-up in the pre-selling market with only about 12,400 units sold. Colliers believes that residential demand should be supported by improving consumer and business sentiment in Metro Manila.

However, Colliers sees rising interest rates as among the headwinds in the residential market, given their potential impact on mortgage rates. Rising construction costs due to higher prices of imported raw materials are also likely to stifle launches in the pre-selling condominium market.