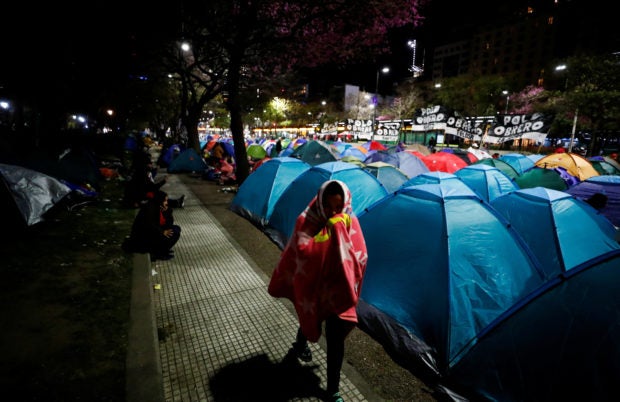 A member of social organization walks past tents during a protest outside the Ministry of Social Development to protest against the IMF agreement, in demand of jobs and resources for soup kitchens, amid a severe economic crisis and spiking inflation, in Buenos Aires, Argentina September 27, 2022. REUTERS/Agustin Marcarian

BUENOS AIRES – Argentina’s deep economic slump drew thousands to the streets on Wednesday, as protesters demanded action to counter sky-high inflation and help the country’s poor, even as data showed the poverty rate dipped in the first half of this year.

Concentrated in the capital Buenos Aires, the protests sought to pressure the leftist government of President Alberto Fernandez to do more to boost the dwindling purchasing power of workers and attend to the swelling ranks of the homeless.

“Argentina is going though a huge crisis,” said Eduardo Belliboni, head of a local workers group, Polo Obrero, as flag-waving protesters sang and others played the drums along blocked roadways.

“And we have an explosive social situation,” he added, arguing that official poverty rates underestimate the real situation because many people who receive public support are not considered poor.

According to official data released earlier on Wednesday, the South American country’s poverty rate fell slightly to 36.5 percent in the first half of this year, compared with 37.3 percent rate during the second half of 2021.

The lastest data marks a 9-percent reduction from the 40.6 percent poverty rate during the first half of last year, according to national INDEC statistics agency.

Argentina, Latin America’s third-biggest economy with a population of about 45 million, has been battered by inflation that is approaching 100 percent this year.

Some researchers emphasize that the country’s poor includes not only those who are unemployed, but also include a growing number who hold tax-paying jobs in the formal economy, but still earn too little to escape poverty.

“Unfortunately, over that past few decades the reality is having a job doesn’t guarantee that you’re still not poor,” said Eduardo Donza, a scholar with Argentina’s Catholic University.