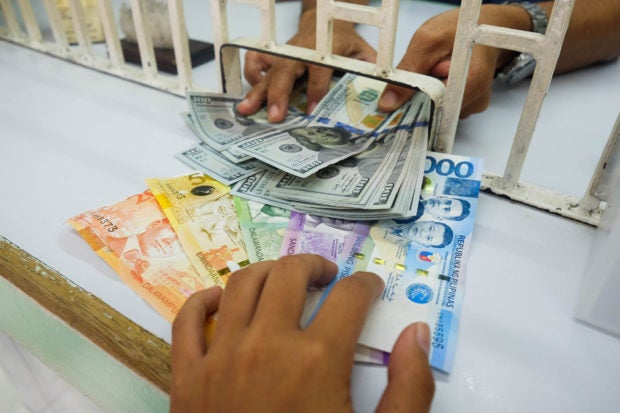 The Philippine peso weakened to yet another new record level for the third-straight trading day at 57:$1.

The local currency closed on Tuesday spot trading at the weakest end of the intraday range after opening at 56.888:$1.

“The peso exchange rate was relatively steady after a slightly lower-than-expected inflation rate [was reported] at 6.3 percent in August [from] 6.4 percent in the previous month, as well as the latest rollback in local fuel pump prices,” Rizal Commercial Banking Corp. chief economist Michael Ricafort said.

Ricafort said that, on the other hand, news of a decision by major crude oil producers —the Organization of Petroleum Exporting Countries and their allies including Russia— agreed to cut output by 100,000 barrels per day starting October adds to the risk that the peso will depreciate further.

A big chunk of the Philippines’ import bill consists of payments for petroleum products.

Ricafort said that since 50.999:$1 at the end of 2021, the peso has already depreciated against the US dollar by a total of almost 12 percent.

According to ING Bank, most central banks around the world are now firmly fixated on addressing the biggest inflation threat since the 1980s, and are now very much focused on slowing demand with restrictive monetary policy.

“This theme is very much playing out in global [foreign exchange] markets,” ING Bank said in a commentary. “Left in the ascendancy remains the dollar—buoyed also by a hawkish [United States Federal Reserve which is] very happy to take the policy rate close to 4 percent and also US energy independence.

The Dutch bank said the dollar is the pre-eminent safe currency right now as it is at its strongest in over 20 years.