High inflation expected for rest of the year | Inquirer Business 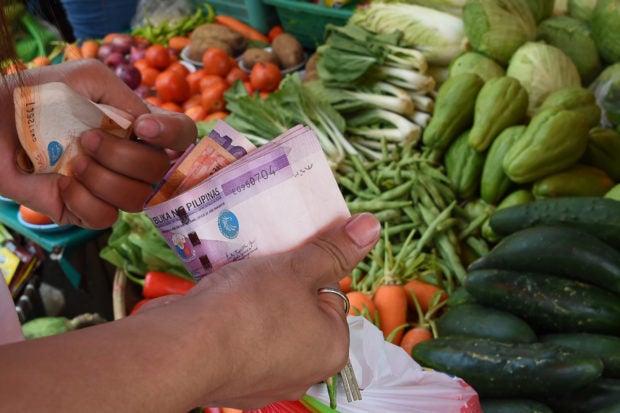 Even then, the outlook for the coming months still points to rising inflation. The decision of the Organization of Petroleum Exporting Countries to reduce crude oil output amid decreasing prices seems to bolster such expectations.

Inflation saw a five-month uptrend starting at 3 percent in February and the latest readout hiked the eight-month average from January to August to 4.9 percent.

This is farther above the government’s target range of 2 to 4 percent for the full-year average.

Still, the results for August are right at the midpoint of the Bangko Sentral ng Pilipinas (BSP) expectation for the month, which the regulator put at 5.9 to 6.7 percent.

The BSP said in a statement the latest reading was consistent with the central bank’s assessment that prices would tend to go higher over the near term and that the impact might be broader.

“The BSP’s baseline projections continue to indicate above-target inflation in 2022, with inflation decelerating back to the target in 2023 and 2024 following the recent BSP policy rate hikes,” the regulator said.

The BSP’ overnight borrowing rate, the benchmark that banks follow for their lending activities, has gone up since May by a total of 1.75 percentage points to 3.75 percent—including a combined 1.25 ppt in July and August—as the central bank moved to tame inflation.

The central bank said the probability that prices would rise further in the next several months continued to dominate the inflation outlook.

This was blamed on the potential impact of higher global non-oil prices, the continued shortage in domestic fish supply, the sharp increase in the price of sugar, as well as pending petitions for transport fare increases.

“Meanwhile, the impact of a weaker-than-expected global economic recovery as well as the resurgence of local COVID-19 infections are the main downside risks to the outlook,” the BSP said.

Finance Secretary Benjamin Diokno said in a statement inflation is expected to remain high in the remainder of this year, but that it would peak during this third quarter.

“We will continue to provide targeted support to key affected sectors,” Diokno said. “Measures include fuel subsidies for the transport sector, fuel discounts for farmers and fisherfolk, and social pension for indigent senior citizens.”

Economic Planning Secretary Arsenio Balisacan, who like Diokno is with President Marcos on a state visit to Indonesia, said inflation was likewise rising in neighboring countries such as Thailand and Singapore. INQ