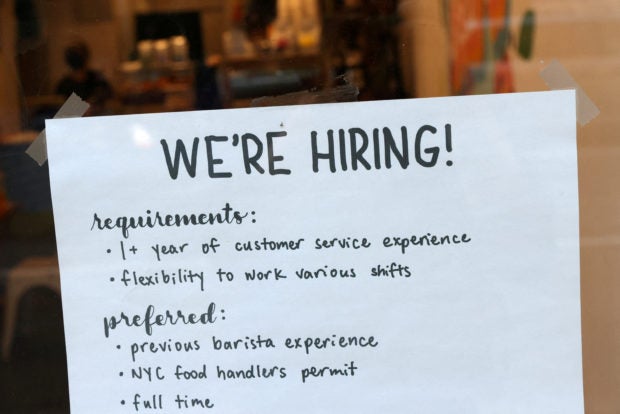 Under the hood, however, the cafe business is about 25 percent short-staffed amid a tight labor market, and employees are stressed. Semanchin has cut opening hours and started closing some days to ease the load, and is considering longer shutdowns during the winter lull. The full-service menu is being changed to include more pre-made items, which means the end of the signature breakfast sandwich in at least one of the locations.

“The hard choices are happening. We are purposely diminishing our business model and even our own expectations,” Semanchin said. “Offer the full pre-pandemic experience? No.”

As Federal Reserve policymakers and central bankers from other countries gather this week at a mountain resort outside Jackson, Wyoming, to take stock of where the COVID-19 pandemic has left economies, Semanchin’s experience offers a parable.

Not a happy one.

The coronavirus outbreak in 2020 coincided with a surge in productivity that led to predictions of a golden age of U.S. innovation and growth, with better technology, improved systems, and pandemic-related trends like work-from-home allowing employees to do more with less.

There has been a massive reshuffling in the economy, as workers moved, switched jobs, and ditched offices for dens, and businesses retooled supply chains and operating models. But those micro-level decisions, as culturally transformative as they seem, may have left underlying economic potential roughly where it was before the pandemic – or maybe even a bit worse, with recent productivity numbers near record lows and few signs of a significant rise in the number of people willing to work.

The productivity dive is still being dissected, attributed to everything from difficulty finding the next big idea, the slow diffusion of new technology, or the recent concentration of hiring in less-productive service-sector jobs. The stall in labor force growth is also complex, held down by an aging population but also probable shifts in preferences about work versus leisure, and tight U.S. immigration policy.

All told, it has been a wake-up call for what the post-pandemic economy may look like.

“Any basis for optimism we had on productivity has been shattered,” said Jason Furman, a Harvard University professor who was the top White House economic adviser in the Obama administration from 2013 to 2017. It now seems the United States “is not emerging from this experience as a higher-productivity economy, and if not, that means potentially higher inflation or weaker growth going forward.”

U.S. inflation, as measured by the consumer price index, rose at an annual rate of 8.5 percent in July, a decline from the 9.1 percent reported for June but still galloping at a painful pace for millions of Americans.

For central banks, understanding just how the pandemic did or didn’t alter the economy is key to policy decisions.

The decade beforehand was characterized by low inflation that came to coexist with low rates of joblessness, and low interest rates.

That world probably isn’t coming back.

“Reversion … is likely off the table,” said Joe Brusuelas, chief economist at RSM, a U.S. based consulting firm. “It is going to be a different economy,” with higher prices, lower growth, and reduced productivity for now.

Recent Fed projections put longer-term U.S. trend GDP growth at 1.8 percent on an inflation-adjusted basis. Economists in a recent Reuters poll projected 1.7 percent GDP for 2022, with a slowdown to 1 percent next year and back up to 1.8 percent in 2024. The outcome influences incomes, employment and issues like the relative burden of government debt, which grew markedly during the pandemic.

Things could change. The middle-sized businesses RSM follows most closely, Brusuelas said, are investing in ways that should enhance productivity and growth, and ease inflation. But those effects may not be felt for five years. Until then, the two things driving how fast an economy grows – the number of workers and the amount each one produces – may well disappoint.

That is a long window during which the U.S. central bank may have to face down heightened inflation pressures with higher interest rates, which could further slow growth and even discourage some of the needed investment.

The rebound from the coronavirus-fueled shock was unexpectedly swift, with firms surviving at higher-than-expected rates, and jobs recovering so quickly that workers had leverage to demand higher pay or switch jobs. The current unemployment rate of 3.5 percent was last eclipsed more than 50 years ago.

But new limits have emerged. Changes in global trade and supply dynamics and commodity markets disrupted by the war in Ukraine helped not just trigger the worst inflation in 40 years, but promised an industrial reorganization that could sustain price pressures while it is underway.

And contrary to assumptions that workers would go back to their old jobs, labor-force growth has flatlined, the participation rate remains depressed, and employment in some service industries seems permanently scarred – a recipe for rising wages that could feed higher prices.

Given that dour landscape, the Fed can’t assume that tools like its target interest rate will have the same influence as before, said Bill English, a former head of the U.S. central bank’s monetary affairs division who is now a professor at the Yale School of Management.

The Fed has raised its benchmark overnight interest rate by 2.25 percentage points this year but has not outlined how high it may need to go, or how long it may need to stay there.

In Union City, California, Emerald Packaging’s trouble sustaining plastic bag production shows why the post-pandemic norm may be a dimmed version of before.

The manufacturer has kept up with technology, Emerald Chief Executive Officer Kevin Kelly said, but is chronically 20 workers shy of its needs, and on any given day even more than that because of people falling sick.

Kelly has found ways for existing workers to make up for missing staff, but managers inevitably have to jump in as well, pulling them away from other duties.

“Overall, they have to run the printing presses slower since one person is setting up, putting the stock on the press and taking it off, managing inks, checking print quality and prepping for the next job,” he said. “So lines are running about 10 percent to 15 percent slower.”

Wall Street ends higher, with all eyes on Jackson Hole