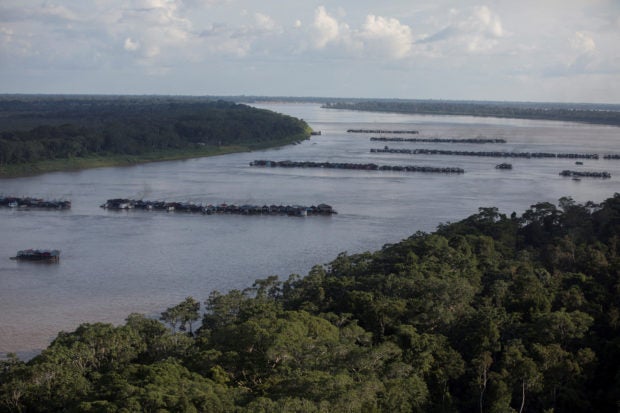 An aerial view shows hundreds of dredging rafts operated by illegal miners who have gathered in a gold rush on the Madeira, a major tributary of the Amazon river, in Autazes, Amazonas state, Brazil. Picture taken on Nov23, 2021. REUTERS/Bruno Kelly/File Photo

SAO PAULO  -Brazil Potash, the Canadian firm planning to build Latin America’s largest potash mine in the Amazon rainforest, is willing to employ local Mura indigenous people as it seeks their backing for the sensitive project, the company said in an interview on Monday.

The project in Autazes, Brazil, 75 miles (120 kms) southeast of the Amazonas state capital Manaus, would reduce Brazilian agriculture’s reliance on imports for 95 percent of its potash needs.

The Mura, who fear the mine would bring prostitution and drugs to their communities, have opposed the project. They did not return calls for comment.

Brazil Potash, owned by Stan Bharti’s Forbes & Manhattan Group, a merchant bank focusing on the resource sector, and partners CD Capital and Sentient, had been granted an installation license by Amazonas state authorities, but it was suspended by a court because the company had not consulted the Mura. Approval now depends on completing the consultations.

“We plan to make commitments to the Mura people to have a percentage of them in our workforce,” said Chief Executive Matt Simpson, adding they will also help the Mura establish their own businesses.

Simpson said the project by the Toronto-based company will create 1,000 direct and possibly up to 5,000 indirect jobs.

He hopes to get the installation permit by year-end so the company can start building the $2.4 billion mine. The final step is getting an operating license allowing Brazil Potash to start up in 2026 as planned.

A spokesperson for Jaiza Fraxe, the Manaus federal judge who suspended the installation license, said talks with the Mura are still at the pre-consultations stage.

Simpson said it remains open for discussion whether Ibama, the federal environmental protection agency, also needs to approve the project. A court ruling on the issue is pending.

“Brazil is a very bureaucratic country and that does cause delays,” an undaunted Simpson said. “We just have to navigate through that.”

If the mine is built, Brazil Potash would sell 100 percent of production domestically using waterways to deliver product to farmers.

The mine will be only 8 km from the Madeira River, and the cost to extract, process and deliver the potash to the farmer is less than the transportation cost alone for imported potash, Simpson said.

The mine’s output could reach 2.4 million tons of potash per year, corresponding to about 22 percent of Brazil’s current demand, after three years in operation.

Brazil is the world’s second biggest potash consumer behind China, and it annual consumption is currently about 11 million tons.