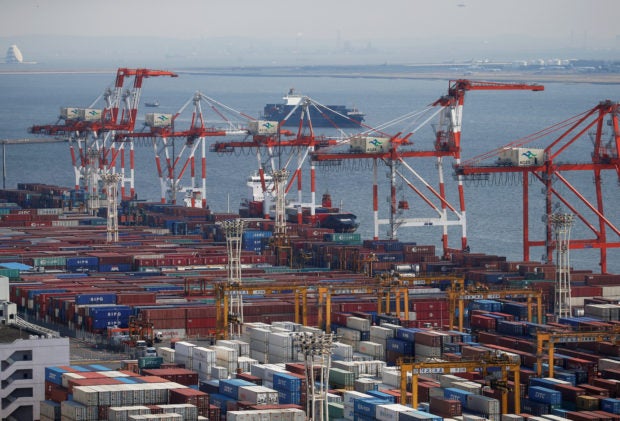 Shipping containers are seen at a port in Tokyo, Japan. REUTERS/Issei Kato/File photo

TOKYO  -Japan’s imports jumped to a record amount in July, boosted by global fuel inflation and a weak yen, outweighing exports and deepening the trade deficit, in a sign of a further worsening in the terms of trade for the export-oriented economy.

The trade data came on the heels of Reuters Tankan, which showed improvement in Japan’s business sentiment in August, while a key gauge of corporate capital spending rebounded in June from the previous month’s decline.

While the mixed batch of data provides some evidence of resilience, policymakers are likely to maintain calls for more stimulus as the world’s third-largest economy struggles to shake off the hit from the pandemic and as the global outlook dims.

“Exports are likely to slow down ahead due to global tightening of monetary policy, which could sap corporate appetite for investment,” said Takeshi Minami, chief economist at Norinchukin Research Institute.

“Japan’s export-led economy will be losing momentum towards later this year and early next amid fears of global downturn.”

Imports rose 47.2 percent in July year-on-year to a record 10.2 trillion yen ($76.06 billion), driven by costs of crude oil, coal and liquid natural gas. That beat expectations for a 45.7 percent rise and overwhelmed exports, bringing the trade deficit to 1.4368 trillion yen in July.

The yen’s 23.1 percent fall from a year earlier added to higher import costs, the data showed.

Capex returns but risks ahead

In April-June, core machinery orders grew 8.1 percent from the previous quarter, posting the fastest growth since the final quarter of 2020. Firms are expecting a 1.8 percent decline in July-September core orders, pulling back from the solid growth seen in the second quarter, a government official told reporters.

However, there are downside risks such as China’s economic slowdown and a COVID-19 resurgence, the official added.

Reflecting corporate resilience, the Reuters Tankan sentiment index for manufacturers rose 4 points to 13 in August and is seen up further to 15 over next three months.

The service-sector index rose to 19 from 14 in July and was seen steady in November helped in part by the lifting of coronavirus curbs among industries such as tourism and eateries.