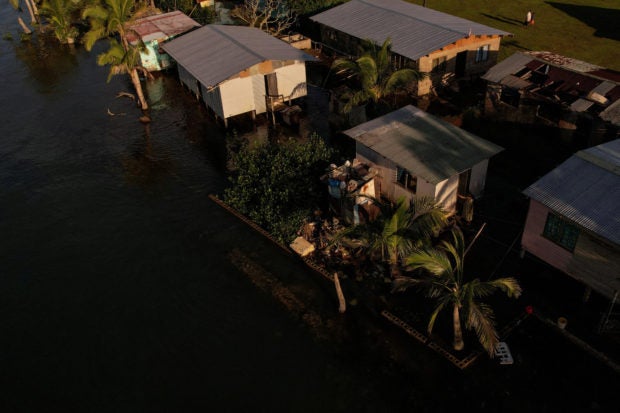 BRUSSELS – Tensions are mounting ahead of this year’s U.N. climate summit, as vulnerable countries ramp up demands for rich countries to pay compensation for losses inflicted on the world’s poorest people by climate change.

When diplomats from nearly 200 countries meet on

But another issue is likely to dominate the talks: “loss and damage,” or climate-related destruction to homes, infrastructure and livelihoods in the poorest countries that have contributed least to global warming.

The world’s 46 least developed countries, home to 14 percent of the global population, produce just 1 percent of the world’s annual CO2 emissions from burning fossil fuels, according to the U.N.

As COP27 approaches, climate losses are surging – in rich and poor countries alike. In recent weeks, wildfires have swallowed huge swathes of land in Morocco, Greece and Canada, drought has ravaged Italy’s vineyards, and fatal floods hit Gambia and China.

“That’s been the critical juncture. We’ve been affected and talked about it for a long time. But now rich countries are being affected as well,” said Saleemul Huq, an adviser to the Climate Vulnerable Forum group of 55 countries.

Wealthy countries also failed to deliver a promise for $100 billion a year by 2020 to help poor countries lower emissions and prepare for climate change. Loss and damage payments would be in addition to that $100 billion.

“It’s not ambiguous. Finance means money. It means put your hand in your pocket and bring out a dollar, a euro, a yen and put it on the table for the victims of climate change,” Huq said.

Just getting loss and damage finance into the COP27 discussion is proving contentious, as a proposal to add it to the agenda has not yet won broad support.

The issue was also not added to pre-COP27 talks in June in Bonn, Germany. Talks there on U.N. technical assistance on accounting for loss and damage also ended without agreement, due to disputes over how that scheme should be governed.

COP27 will be no easier, as rich countries arrive with purse strings tightened by soaring energy costs, the economic fallout of the Ukraine war and the COVID-19 pandemic, which prompted wealthy countries spend trillions of dollars propping up their economies.

“It’s my hope that developing nations will galvanize their collective voices to push for adequate treatment of loss and damage,” said Matthew Samuda, a minister in Jamaica’s economic growth ministry who works on climate change.

Historically, rich economies including the United States and the 27-country European Union have resisted steps that could assign legal liability or lead to compensation.

Negotiators at last year’s COP26 U.N. summit agreed to launch a two-year dialogue on loss and damage, but stopped short of setting up an actual fund.

Putting the topic on the COP27 agenda could open up discussions on where the money would come from, how it would be distributed or even how to define climate-induced losses. Some research suggests such losses could reach $580 billion per year by 2030.

“Everything’s been left quite uncertain on how to rebuild the trust between developed and developing countries,” said Alex Scott, climate diplomacy expert at think tank E3G.

Still, some resource-challenged countries hope for a breakthrough.

“We are hopeful that the international community will soon step up,” said Madeleine Diouf Sarr, chair of the Least Developed Countries bloc in U.N. climate negotiations, pointing to a growing acknowledgement among rich countries of the need.

During a visit to Pacific archipelago Palau last month, for example, Germany’s foreign minister said her country would prioritize the issue in its own international climate policy.

“This is an issue we haven’t talked enough about for a very long time,” Annalena Baerbock said. “And it really is about financing.”