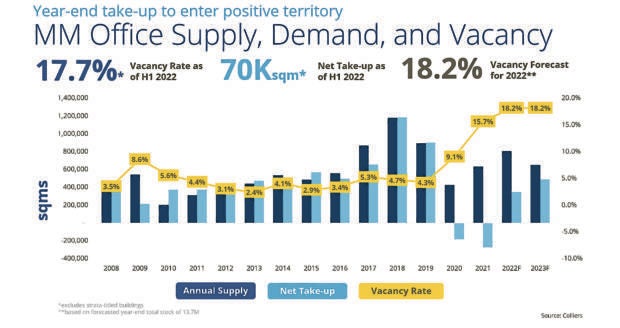 Colliers Philippines just concluded its property market presentation for the second quarter of 2022.

Overall, we believe that very good macroeconomic prospects over the next 12 months are likely to support the property sector’s recovery. Based on President Marcos’ first State of the Nation Address (Sona), continued infrastructure implementation and decentralization efforts will further propel the sector beyond the pandemic.

There’s a lot of optimism in the market, especially for the office segment, where transactions are finally picking up after tempered demand in 2020 and 2021. The residential sector is also starting to recover especially with improving take-up in the pre-selling market. However, demand is likely to be stifled by rising interest rates and the continued increase in the prices of construction materials.

Colliers Philippines has recorded two consecutive quarters of positive net take-up in office space. This indicates that Metro Manila transactions are holding firm despite the popularity of hybrid work arrangements, and we project sustained absorption for the remainder of the year. New supply, meanwhile, is reverting to pre-Pogo (Philippine offshore gaming operator) levels last seen in 2016. Colliers is now seeing developers managing supply in the market to prevent further correction of rents.

Colliers also sees a gradual market recovery and we recommend landlords and tenants to capitalize on the growth trajectory by assessing hybrid work arrangements that will support operations; leveraging opportunities brought about by the tenants’ market; clarifying concerns on investment promotion agency (IPA) transition and incentive qualification; and by providing flexibility on office handover conditions depending on tenant preferences. 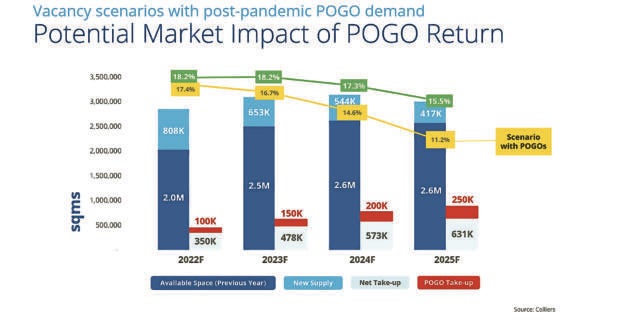 Traditional offices should not just comply with health and safety protocols. Both landlords and tenants should also work together to design office spaces that foster a collaborative working environment and support a dynamic working culture.

In the second quarter, Colliers saw the completion of 146,700 sqm of new office supply, lower than the previous quarter’s 306,100 sqm. For the remainder of 2022, we project the delivery of 356,200 sqm of new office space. Makati fringe and Ortigas Center are likely to cover 65 percent of the remaining supply.

Among the buildings due to be completed are Makati Commerce Tower, PMI Tower, Studio 7, SM Fairview Towers and Corporate Finance Plaza. From 2023 to 2026, we forecast the annual completion of about 543,300 sqm. We see annual new supply reverting to pre-Pogo levels, when yearly completion was between 450,000 and 550,000 sqm from 2014 to 2016.Transactions up 62%

Colliers recorded 325,100 sqm of office transactions in the first half, up 62 percent from a year ago. Colliers is starting to see a pickup in demand for office space as more traditional occupiers implement return-to-office (RTO) mandates and outsourcing firms pursue their expansion plans. 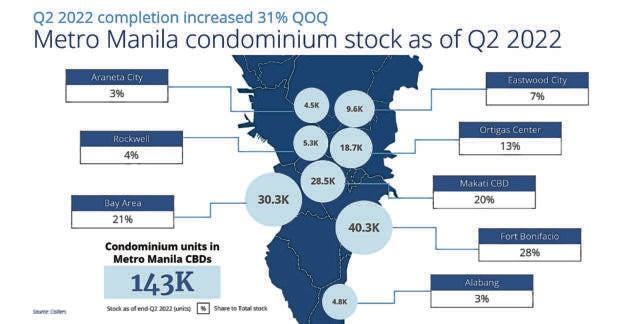 In our opinion, traditional and outsourcing companies are likely to lead office space take-up in 2022 as the impending threat of a global recession is likely to compel US firms to outsource their services from the Philippines. The depreciating Philippine peso should also make the country an attractive option for outsourcing firms.

Average office rents in Metro Manila dropped by 2.6 percent quarter on quarter, slower than the 3.1 percent decline in the first three months of the year. In our view, rents will improve by 2023. We forecast rents dropping in 2022 albeit at a much slower pace of 7 percent compared to the 12 percent correction in 2021.

Metro Manila’s pre-selling condominium market is likely to be hampered by rising interest rates, while compressing yields have been compelling developers to delay condominium launches in the capital region.

Pre-selling condominium take up in Metro Manila reached 8,600 units in the first half, down from 10,600 units sold a year ago. In 2021, Colliers recorded anemic launches and take-up in the pre-selling market. Only 27,100 units were launched last year while only 12,400 were sold. In our view, 2021 take-up figures are likely to be breached this year.

We see the rising prices of building materials adversely affecting the launch of new projects. Data from the Philippine Statistics Authority (PSA) show that the wholesale price index for construction materials in Metro Manila increased by 8.3 percent in May 2022—a 10-year high. 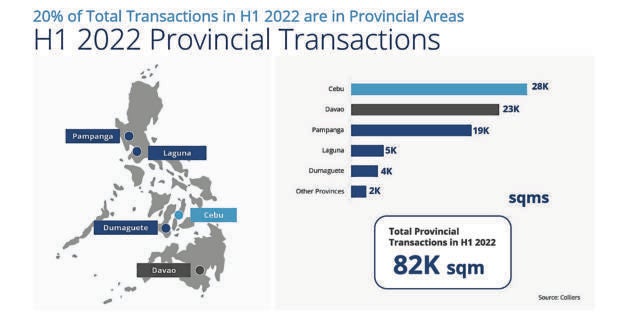 Colliers believes that developers are now taking a more cautious stance as they await the release of the new administration’s economic agenda, including pro-property reforms, and gauge general consumer sentiment amid rising inflation and interest rates. The secondary market, meanwhile, is likely to benefit from the return of foreign employees as well as local firms’ RTO mandates. We see this positively influencing prices and rents in major business districts.

To attract potential buyers, we recommend developers to offer more attractive and innovative promos and payment schemes; highlight amenities that will differentiate their projects and to attract discerning clients; and explore securing green building certification especially with the growing demand for more sustainable residential projects.

Vacancy to decline across all submarkets

Colliers saw overall vacancy in Metro Manila’s secondary residential market slightly receding to 17.5 percent in the second quarter compared to 17.8 percent a quarter ago. We saw vacancies dropping across all submarkets except for the Bay Area, which covers 21 percent of total secondary units in Metro Manila. We expect vacancy to slightly ease to 17.3 percent by the end of 2022, partly backed by the return of more local and foreign employees to their traditional offices in Metro Manila business hubs.

The improvement in consumer and business sentiments further provides a glint of optimism in the residential market that is partly stifled by rising interest rates.

Colliers believes that the inflow of more overseas Filipino worker (OFW) remittances should partly sustain residential demand particularly for horizontal units outside the capital region that are within the affordable to mid-income price segments (P1.7 million to P6 million). While Metro Manila’s pre-selling condominium market is starting to rebound, we see demand for horizontal projects outside of the capital region being sustained beyond 2022.

There are opportunities amid the uncertainties. One thing is for sure, Philippine property is bound for rebound.