Marcos vows farm and tax overhauls in address to nation 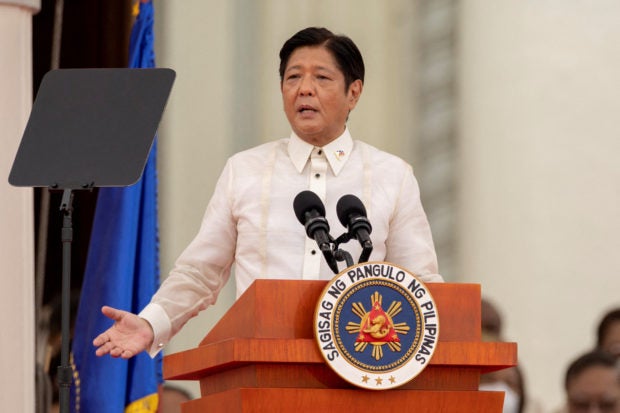 FILE PHOTO: Ferdinand “Bongbong” Marcos Jr., the son and namesake of the late dictator Ferdinand Marcos, delivers a speech after taking oath as the 17th President of the Philippines, during the inauguration ceremony at the National Museum in Manila, Philippines, June 30, 2022. REUTERS/Eloisa Lopez/

MANILA  – Philippine President Ferdinand Marcos Jr pledged on Monday to overhaul his country’s tax system and make it a destination for investment and tourism, promising also a big agriculture overhaul to boost output and reduce its heavy import reliance.

Speaking before Congress in his first state of the nation address, Marcos, who won a May election in a landslide, said it was vital to implement reforms to bring in tourism and investment and maintain what was currently firm growth momentum.

His administration would implement solid fiscal policy management and was targeting 6.5 to 7.5 percent gross domestic product growth this year, he said, while warning of challenges ahead in keeping prices stable.

Marcos, the son of the late strongman ousted from power in a 1986 uprising, said it was critical that the Philippines, a major importer of rice and other commodities, can boost its farm output and become more resilient to climate change.

Among the measures he would introduce was a moratorium on farmers’ debts to allow them to channel resources into improving output.

“It will unburden farmers of their dues and be able to focus on improving farm productivity,” he said, while stressing the need for an “infusion of fresh and new blood”, and use of scientific farming by a new breed of farmers.

Marcos also promised to improve education, healthcare and working conditions for doctors and nurses and boost infrastructure in the nation of more than 7,000 islands, including modernizing airports.