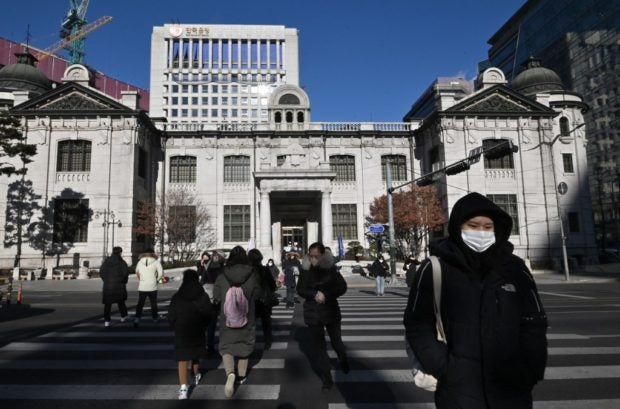 Pedestrians cross a road in front of the Bank of Korea headquarters in Seoul on Jan 14,. 2022. (Photo by Jung Yeon-je / AFP)

South Korea’s top financial regulator pledged Tuesday to review lowering the regulatory barriers that limit the industrial sector from owning banks, to accelerate digitalization of the economy and global growth.

“The goal of our financial regulatory overhaul is to create a new field, so that leading global players like (K-pop band) BTS can be born in our financial industry,” Financial Services Commission Chairman Kim Joo-hyeon told a regulatory reform meeting.

“We will allow local financial institutions to do the same as our global rivals, and in the process reexamine our existing system and practices,” he added, while pointing to an overhaul of regulations surrounding bank ownership as a key task.

The law was adopted in 1995 to prevent excessive privatization of banks and block banks from making investments and running businesses with their customers’ deposits. The rule doesn’t apply to financial institutions that do not run a banking business.

“While maintaining the basic framework for financial stability, we plan to review a reform of banks’ investments in subsidiaries by expanding its limits and help accelerate investment in IT, platform businesses and new technologies,” Kim explained.

If the barrier is lowered, banks may be able to launch businesses in telecommunications, food delivery and more.

Lowering the barrier between banks and the industrial sector was chosen as one of the 36 key regulatory reform tasks for the FSC on Tuesday. The FSC officially launched a committee of 17 private experts for the purpose.

But the committee adopted a more cautious stance on removing hurdles for industrial businesses seeking to enter the banking sector. Seoul National University law professor Jung Sun-seop, a member of the committee, said that the matter is more of a “long-term task” due to risks that could stem from Big Tech’s foray into the banking business.

The FSC chief also vowed to review regulations that currently prevents financial institutions from offering customers a wider range of services via online and mobile and support the launch of an alternative trading system to boost competition in the market.