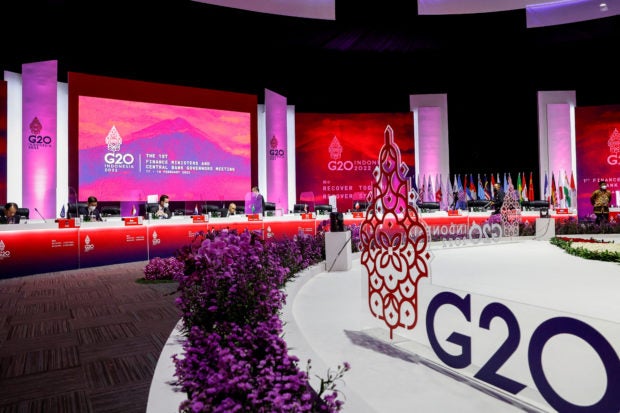 FILE PHOTO: Head of delegates prepare for a meeting on the last day of the G20 finance ministers and central bank governors meeting in Jakarta, Indonesia, February 18, 2022. Mast Irham / Pool via REUTERS

JAKARTA — G20 finance leaders will meet in Bali this week for talks that are due to include issues like global food security and soaring inflation, as host Indonesia tries to ensure frictions over the war in Ukraine do not blow discussions off course.

Russia’s invasion of Ukraine overshadowed a meeting of foreign ministers from the Group of 20 major economies last week, as Russia’s top diplomat walked out of a meeting and accused the West of “frenzied criticism”.

Indonesia hopes to issue a communique when talks wrap up on Saturday though its central bank governor said the meeting would be summarized in a chair’s statement if that is not feasible.

“We hope for the best, but of course prepare for the worst,” said Indonesia’s central bank governor Perry Warjiyo.

“I don’t want to speculate, we are still trying very hard to reach a communique,” he said in an interview last week.

Indonesian officials have noted disagreements between Western countries and Russia on how to word a draft communique to describe the state of the global economy and how it is being affected by the war in Ukraine, which Moscow calls a “special military operation”.

At the last G20 finance leaders’ meeting in Washington in April, no communique was issued and officials from some Western nations left the room when it was the turn of the Russian representative to speak.

U.S. Treasury Secretary Janet Yellen and Japanese Finance Minister Shunichi Suzuki, after a bilateral meeting in Tokyo on Tuesday, blamed the war for volatility in currency markets and for increasing the risk of global recession.

Yellen and Suzuki are due to attend the Bali meeting in person.

Indonesia has said Russian Finance Minister Anton Siluanov will address the meeting virtually, with his deputy travelling to Bali. Ukraine’s finance minister has also been invited and is due to attend one session virtually.

Putting aside issues related to the war, Warjiyo said the G20 had made substantial progress on topics like regulatory principles on crypto and central bank digital currencies.

Indonesia’s G20 deputy for finance, Wempi Saputra, said the group will try to come up with actions to help poor countries tackle a looming food crisis, by ensuring supply and affordability of food and fertilizers.

Other topics on the agenda include the setting up of a fund under the World Bank to better prepare for future pandemics and a Resilience and Sustainability Trust at the International Monetary Fund that could be accessed by countries in need of funds, as well as debt relief for poor countries.

Indonesia’s Wempi said a multinational signing of a global tax agreement, initially scheduled on the sideline of meetings, has been pushed back. The Organization for Economic Cooperation and Development has set a new target for the major tax overhaul to take effect in 2024, instead of 2023.