An enduring legacy of faith 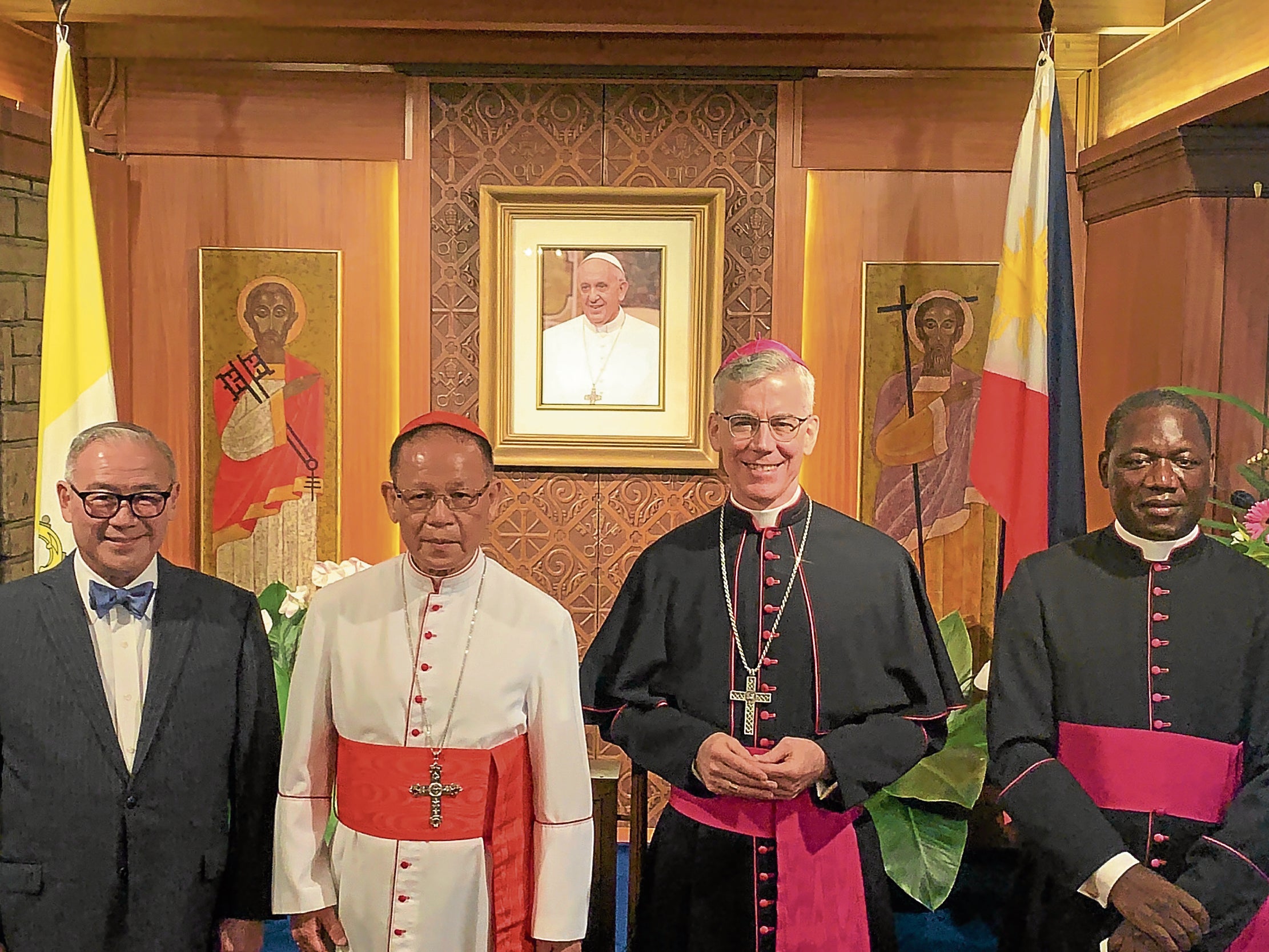 The Apostolic Nuncio, also known as the Ambassador of the Holy See, hosted a dinner reception for the diplomatic corps and friends of the Nunciature last Tuesday, the eve of the Solemnity of Saints Peter and Paul. This also marked Pope’s Day or the National Day of the Holy See.

Since the first COVID lockdown in 2020, the embassy had been strict on health protocols and the Pope’s Day celebrations were suspended in 2020 and 2021. So it was with great joy that Archbishop Charles John Brown, Apostolic Nuncio to the Philippines, welcomed everyone to this year’s reception.

In his welcome remarks, the Nuncio said, “Finally today after a hiatus … our festivities continue with lots of joy. And it is fitting today, this evening, that we give thanks to God that the pandemic, though not ended, has certainly receded or subsided and allowed us to return to a semblance of normal life.” He added, with humor, “We, Catholics, are still waiting to hear the words, ‘The MASK is ended, go in peace’ … excuse the pun …”

The dinner was catered by the Catholic-themed Manila restaurant Ristorante delle Mitre. While the restaurant is known to serve the favorite dishes of Filipino cardinals, bishops and priests, which are mostly Filipino food ranging from sinigang to silvanas, the reception had an Italian-inspired menu. Guests were welcomed with canapés and Prosecco and the big hit at the buffet was the cannelloni.

The Guest of Honor was Foreign Affairs Secretary Teodoro Locsin Jr., whom Archbishop Brown thanked in his speech “for his service to his nation and for his kindness, his expertise and his availability to the diplomatic corps since his appointment in October 2018.” He added, “It has been a pleasure for all of us in the diplomatic corps to work with you, Sec. Locsin, and we wish you the very best in whatever the future holds for you.”

Sec. Locsin returned the love: “On behalf of the Republic of the Philippines, I have the honor to extend our happy greetings to the men and women of the Holy See as we celebrate the Feast of the Apostles Sts. Peter and Paul and the National Day of the Holy See. Filipino Catholics all over the world join the global Catholic community in celebrating and honoring St. Peter and St. Paul,” he began.

With signature humor, he continued, “Peter was the rock on which God built his church, to whom he entrusted the keys to the Kingdom. Paul was an example of those who come late into the true faith … but said more about it than the apostles!” And the journalist in him could not resist adding, “Indeed, those who write well decide what history and theology will be.”

Again, with signature humor, he added, “… and the separation of church and state … was shown by the reception Magellan got from Lapu-Lapu.”

A toast for the Pope

On the impact of the Catholic faith on Filipinos, he declared, “After 350 years, all that was left of Spain were Filipinos speaking bad Spanish—like myself—but Catholicism endured triumphant for a full half a millennium, more fervent and pervasive to the practice than its observance among the practice of the people who brought Catholicism here.” (He forgot that aside from the faith, Spanish food in the Philippines has also endured! But on this occasion, we can forgive His Excellency who is also an exceptional foodie!)

Sec. Locsin raised a toast to Pope Francis, to the Holy Father’s good health and continued success, and to the lasting bonds of friendship and shared faith of the Philippines and the Holy See. He also acknowledged the shared mission of uplifting the welfare of migrants, whom he recalled Pope Francis had “urged to persevere in the work of evangelization by example.” And he joined the Nuncio in praying for peace.

But I suspect the holiest of all was Sec. Locsin, who must have a hotline to heaven because after his prayers for the Pope’s good health at the Nunciature Reception, Pope Francis was seen at the Eucharistic Celebration in St. Peter’s Basilica the next day—no longer in a wheelchair but walking!! I suspect that behind all that Twitter gibber is actually a man of fervent prayer, inspired by St. Paul—“late into the true faith” but writing tirelessly to make the faith endure!

It’s always a beautiful reception when you are filled with both food and faith. Cheers and prayers for the Holy Father and the Holy See! INQFor homilies and talks of Apostolic Nuncio Archbishop Charles John Brown, visit dominusest.ph/nuncio.