Slowly but surely, POGOs coming back online in PH 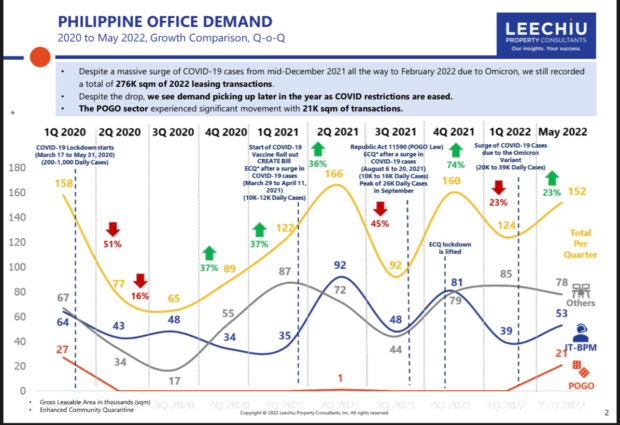 This is according to property consulting veteran David Leechiu, who said that despite the surge in Omicron variant-induced COVID-19 cases from mid-December 2021 through February 2022, the country still recorded 276,000 square meters of new office leasing transactions in the first five months of this year.

Overall, he said office property demand in the second quarter was looking to be the highest level since January 2020.

“So it looks like it’s on the path to recovery. I don’t think Omicron 2 is going to change that,” Leechiu said in a recent interview with Inquirer. “If it ever successfully stops the growth, then I think it will be very temporary, and as soon as people get well and more people get well, you’re going to see a continuation of this increasing demand because the sentiment has totally changed from a tenant market perspective.”

Demand for office space mostly came from the information technology-business process management (IT-BPM) industry, which has been directed by the government to return to their offices starting April in order to retain their fiscal incentives.

The last time there were new POGO office leasing transactions was in the first quarter of 2020, prior to the hard lockdowns imposed by the government to curb local COVID-19 transmission.

At its peak, the POGO sector — which mostly employs mainland Chinese workers — accounted for as much as 10 to 15 percent of major office landlords’ prepandemic portfolio. They also rented residences and contributed to consumer spending.

In the last two years, POGOs vacated about 500,000 square meters of local office space. The exodus was driven by a confluence of: change in local tax regime, China’s crackdown against online gambling and cross-border travel restrictions when lockdowns started.

But recently, the easing of travel restrictions is allowing more Chinese nationals to return.

“So that’s very encouraging. It’s not a lot yet, but it seems like they’re coming back and taking up the dorm space now,” he said.

Some POGOs that vacated their offices during the pandemic but continued to pay rent were now reclaiming their old space, he noted.

“Some had defaulted but are now coming back. Because nobody’s renting their office space, they just got them back,” Leechiu said, suggesting that the landlords were currently more accommodating to those who defaulted because they wanted to fill up unoccupied office properties fast.

Under the POGO law enacted in 2021, all offshore gaming licensees must pay a 5-percent gaming tax on the gross gaming revenue or receipts derived from their gaming operations.

Foreigners employed by POGO licensees and their service providers will also have to pay a final withholding tax of 25 percent on gross income, provided, that the minimum final withholding tax due from any taxable month from such persons is not less than P12,500. The new law also requires that the employees secure a tax identification number (TIN).

“There are some (POGO) companies that are willing to operate under the tax regime and there are some that find it too expensive. But I think from the labor perspective, they really like the Philippines because they feel assimilated,” Leechiu said.

Asked whether it’s possible for Pogos to return to the same scale seen previously, Leechiu said while he could not say for sure, there’s a “good chance” it would happen.

“Certainly, this administration is quite pro-China, doesn’t necessarily mean that it’s anti-US… I think this upcoming administration is eager to achieve a balance between between the West and the East. And I think that will be a good thing for China investors coming to the Philippines and that will include the POGO sector.” he said.

Tax revenues from Pogos hit P 1.2B in 3 months