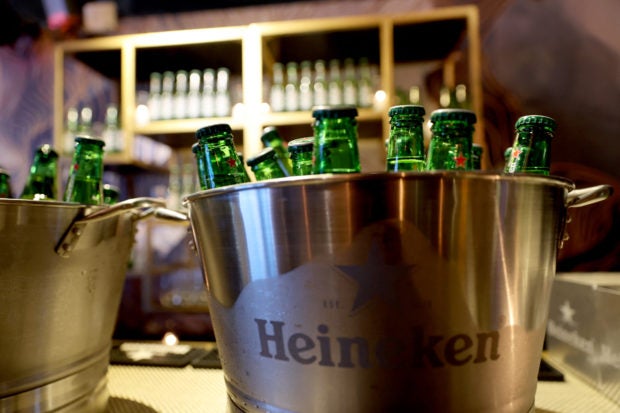 Heineken, the world’s second-biggest beer company said Wednesday it was stopping the production, advertising and sale of its namesake brand in Russia “in response to the continued escalation of the war”.

“We are shocked and saddened to watch the tragedy in Ukraine unfold,” Heineken chief executive Dolf van den Brink said in a statement.

“The Russian government’s war against Ukraine is an unprovoked and completely unjustified attack,” he said.

Heineken employs 1,800 people in Russia and says it is the third-biggest brewer in the country, where it makes the Zhigulevskoe and Oxota brands for the local market.

The brewer said it would take “immediate steps to ring-fence” its Russian business from the rest of its global operations “to stop the flow of monies, royalties and dividends out of Russia”.

“Heineken will no longer accept any net financial benefit derived from our Russian operations,” it said.

Heineken’s other famous brands include Amstel, Tiger and Strongbow cider.

Danish brewer Carlsberg, the world’s fourth biggest beer producer, said it too was halting production and sales in Russia.

It said Baltika Breweries, which it majority owns, would continue to operate as a separate business to sustain its 8,400 employees in Russia “who are not responsible for the actions of the government”.

The Danish group said that, during the humanitarian crisis in Ukraine, any profits generated by its business in Russia would be donated to relief organisations.

About 300 companies have announced their withdrawal from Russia since it invaded neighbouring Ukraine, according to Yale University researchers.

McDonald’s, Coca-Cola and Starbucks joined the crowd on Tuesday following public pressure to do so.

Also on Tuesday, Universal Music Group, the world’s biggest label, said it was suspending all operations and closing its offices in Russia effective immediately.

“We urge an end to the violence in Ukraine as soon as possible,” Universal said in a statement.

“We are adhering to international sanctions and, along with our employees and artists, have been working with groups from a range of countries… to support humanitarian relief efforts to bring urgent aid to refugees in the region,” it said.

Elsewhere, French rail giant Alstom announced Wednesday that it was suspending deliveries to Russia as well as future business investments there.

But Alstom said it was keeping its stake in Russian locomotives and rail equipment provider Transmashholding.

Ferrari, which has no factories in Russia and is represented there by two independent dealerships, sells less than 100 cars every year in Russia, out of more than 11,000 delivered worldwide last year.

The Italian company on Tuesday announced a donation of one million euros ($1.1 million) “to support the Ukrainians in need”.

Russians brace for sanctions as their favorite shops close