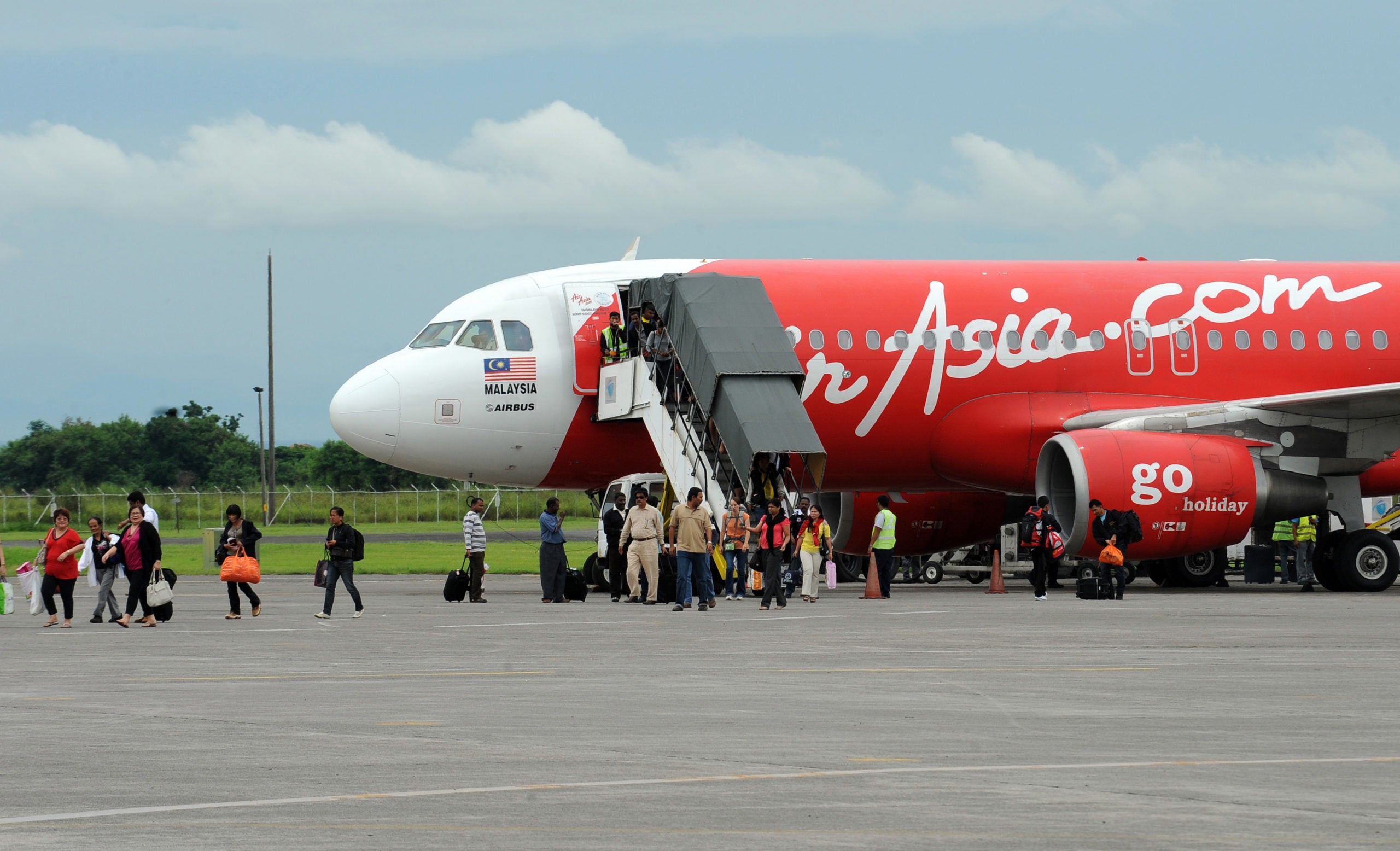 Passengers disembark from an AirAsia aircraft shortly after arriving from Kuala Lumpur in Malaysia at Clark airport in Angeles City, Pampanga province, north of Manila on August 15, 2011. Asian budget carrier AirAsia launched a new affiliate in the Philippines on August 15, promising to undercut its rivals on regional and domestic routes. AFP PHOTO/TED ALJIBE (Photo by TED ALJIBE / AFP)

MANILA, Philippines—The emergence of new and more contagious coronavirus variants has not dampened demand for air travel, with seven out of 10 passengers keen on pushing through with their trips this year, AirAsia Philippines said.

The results showed continued strong appetite for air travel and a noticeable shift in habits as flyers now favored smaller groups and tighter budgets during the health crisis.

“We are seeing that Filipinos are now much more confident to travel as we as a nation gain a better understanding of the pandemic and develop a more fitting culture of safety and vigilance,” said Ricardo Isla, AirAsia Philippines CEO, in a statement.

“At AirAsia, we are observing an uptrend in long-term bookings which signifies a more positive outlook on travel plans this year,” Isla said.

“But we are not letting our guards down. We will be consistent in prioritizing the safety and wellbeing of our guests as they fly to their intended destinations,” he added.

Davao also ranked high as a destination among Visayan travelers at 52 percent from respondents in the region. Once overseas borders are relaxed, the top international preferred destinations were Seoul, South Korea (78 percent) Singapore (73 percent) and Osaka, Japan (71 percent).

AirAsia Philippines said 53 percent of respondents said they wanted to travel to spend time with families and friends.

Smaller travel parties will be the norm this year as 69 percent of respondents said they will travel with family instead of work colleagues or group tours. Another 40 percent planned to travel with their partners and 24 percent with close friends.

Budgets will also be slashed for upcoming trips, the survey revealed. AirAsia Philippines said 38 percent of flyers wanted to limit travel expenses to below P15,000. Another 15 percent said they were willing to spend up to P20,000 while 13 percent were prepared to spend up to P40,000 for a trip.

“Frugality has been expected by air carriers given the economic impact of COVID-19 and the long list of essentials in a pandemic, as well as the need to grow personal emergency funds,” the budget airline said.

AirAsia Philippines recently reported a positive 11 percent increase in seat sales on a week-on-week basis in the first week of January. The top five destinations were Tacloban, Cebu, Caticlan, Panglao and Davao.

Read Next
2 Filipino women join Forbes’ 50 over 50: Asia 2022 list
EDITORS' PICK
Japan brings back virus restrictions over Omicron surge
Gear up and get ready to play with Yamaha Mio Gear
Over 3 Million worth of prizes to be won at Smart Padala’s SENDali Manalo Promo!
Uproar over no vax, no ride policy: Maybe it’s time for gov’t to say sorry—Bello
97% of COVID-19 beds at PGH currently occupied
Acer starts the year off strong with the Aspire Vero National Geographic Edition
MOST READ
1Sambayan names 7 aspirants in its 2022 Senate lineup
Emma Stone calls Andrew Garfield a ‘jerk’ after he ‘lied’ about his ‘Spider-Man: No Way Home’ appearance
Guevarra to Acosta: Obey rules on unvaccinated
PH to import 60,000 tons of fish to cover shortage
Don't miss out on the latest news and information.