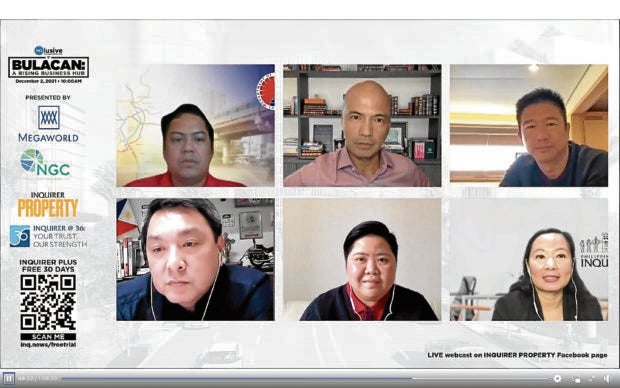 You can still watch the replay of this webinar via Inquirer Property’s Facebook page
(Facebook.com/INQ.Property).

Bulacan will no doubt transform into an economic powerhouse as investments prime areas north of the capital for growth.

“Bulacan is developing,” said Victor F. Mendoza, president of the Bulacan Chamber of Commerce and Industry. “The southern provinces had their time with all the support and projects of the government going that way. This time, development has nowhere to go but Bulacan.”

Transportation Undersecretary Timothy John K. Batan agreed: “For the last two decades, the expansion has been going to the south. Recently, we started to balance that out with movement in the north.”

That northward “movement” and the possibilities born out of it were discussed at the Dec. 2 edition of the INQlusive webinar series titled, “Bulacan: A Rising Business Hub,” presented by the Property and Business sections of the Philippine Daily Inquirer and property giant Megaworld Corp., which is also investing in the province through an upcoming township called Northwin Global City (NGC).

“There is the natural extension of Manila into Bulacan,” noted David Leechiu, cofounder and CEO of Leechiu Property Consultants. “The one piece missing has been infrastructure, but the airport is coming, the rails are coming, more roads are being built.”

Leechiu was referring to projects under the government’s P8-trillion “Build, Build, Build” infrastructure program. There’s the New Manila International Airport in the town of Bulakan, plus numerous diversion and bypass roads.

Batan, the spearhead for railway initiatives at DOTr, also added to that list the MRT-7 ending in San Jose del Monte, the Metro Manila Subway connecting Cavite to Bulacan, and the North-South Commuter Railway (NSCR) System from New Clark City to Calamba.

One of seven NSCR stations in Bulacan will be hosted by Northwin Global City, Megaworld’s 28th township. The expansive project just 20 km from Metro Manila and 20 minutes from the Bulacan airport is also seen to generate progress, added Noli Hernandez, Megaworld EVP for sales and marketing—and a native of Calumpit.

“If you look at all the other locations where we (Megaworld) have a presence, we have unlocked so much value,” he said. The 85-ha development would not be an exception. It will be a sustainable undertaking featuring a commercial district, high-rise offices and residences, hotels, malls, mixed-use commercial buildings and educational institutions—true to the company’s live-work-play-learn philosophy.

This year, Bulacan is already preparing for the upsurge, according to Mendoza. This meant upskilling workers for upcoming openings, and priming businesses for a more competitive landscape. They are likewise crafting strategies in industries like tourism, agriculture, construction and services.

“We are trying to rally… all the stakeholders in the province, from the LGUs to the business sector, even the academe. We do not want to be surprised five to six years from now,” Mendoza said.

The four-million-strong population will be an advantage for businesses, added Hernandez.

“We have one of the highest standards of living in the Philippines. We have a very able workforce… The LGU is business-friendly and I can only imagine how our township will enhance that picture for the economy of the area,” Hernandez said.

Bulacan will reward those with “the right eye for the opportunities lurking in the area,” according to Mendoza.

“Bulacan has vast plain lands, which can accommodate more and more development. Bulacan has coastal areas, so that’s an opportunity as well. We also have highlands… We are thirsty for development; and now it is coming and we are all excited,” Mendoza concluded.

Read Next
PAL poised for recovery as it emerges from US Chapter 11 bankruptcy process
EDITORS' PICK
Gear up and get ready to play with Yamaha Mio Gear
PH to import 60,000 tons of fish to cover shortage
#VotePH2022: COVID, power woes loom as poll concerns
Over 3 Million worth of prizes to be won at Smart Padala’s SENDali Manalo Promo!
Workers are exempted from ‘no vax, no ride’ policy – DOLE chief
Acer starts the year off strong with the Aspire Vero National Geographic Edition
MOST READ
Guevarra to Acosta: Obey rules on unvaccinated
Emma Stone calls Andrew Garfield a ‘jerk’ after he ‘lied’ about his ‘Spider-Man: No Way Home’ appearance
Cold-case investigation names surprise suspect in Anne Frank’s betrayal
Czech anti-vax singer dies after deliberate infection
Don't miss out on the latest news and information.