The World Food Programme was awarded the Nobel Peace Prize in 2020.

Congratulations to Maria Ressa on being awarded the 2021 Nobel Peace Prize. Truly a historical moment for the Philippines. Bravo to the Nobel Committee for making it ring loud and clear around the world that journalists cannot and should not be silenced in any way. Any day that a journalist is silenced—any day that a citizen is silenced—is a day without peace.

I loved how the Nobel committee linked the pen to peace. In their press release, they wrote: “The Norwegian Nobel Committee has decided to award the Nobel Peace Prize for 2021 to Maria Ressa and Dmitry Muratov for their efforts to safeguard freedom of expression, which is a precondition for democracy and lasting peace.”

Equally impressive was the previous year’s choice. Linking food and peace, the committee awarded the 2020 Nobel Peace Prize to the World Food Programme “for its efforts to combat hunger, for its contribution to bettering conditions for peace in conflict-affected areas and for acting as a driving force in efforts to prevent the use of hunger as a weapon of war and conflict.”

This was not the first time that combating hunger was acknowledged as essential to peace. In 2019, US-based Spanish chef José Andrés was nominated for the Nobel Peace Prize for his work on disaster relief through the nonprofit organization he founded, World Central Kitchen.

Andrés founded World Central Kitchen in 2010 and made it his mission to serve hot meals to millions in difficult situations, especially those in disaster zones. The nonprofit fed more than 3 million Americans in Puerto Rico following the devastation of Hurricane Maria. At the height of the COVID-19 pandemic in 2020, they were also able to churn out over 2,000 meals an hour for the hungry across the United States. 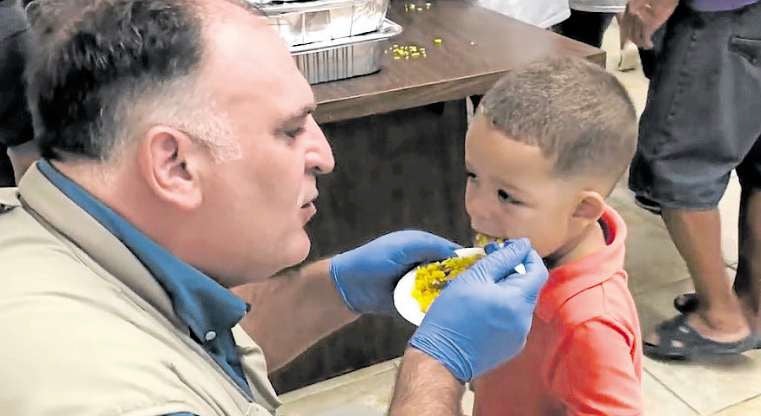 COMBATING HUNGER Chef José Andrés was nominated for the 2019 Nobel Peace Prize for his work in the World Central Kitchen, which he founded in 2010. —CONTRIBUTED PHOTOS

Hunger, according to the United Nations, is the term used to define periods when populations are experiencing severe food insecurity, i.e., going for entire days without eating due to lack of money, lack of access to food, or other resources. In 2020, between 720 and 811 million people faced hunger (fao.org/state-of-food-security-nutrition).

The Nobel Committee especially noted the impact of the pandemic on hunger, pointing out the health crisis “contributed to a strong upsurge in the number of victims of hunger in the world. In countries such as Yemen, the Democratic Republic of Congo, Nigeria, South Sudan and Burkina Faso, the combination of violent conflict and the pandemic has led to a dramatic rise in the number of people living on the brink of starvation.”

Indeed, hunger has become like a second plague after COVID-19. In the United States, the lockdowns decimated American food banks, causing even the more established ones to lose billions of dollars.

That is why those who stepped up to feed the hungry were also appropriately recognized as heroes of the pandemic. The Nobel Committee noted: “In the face of the pandemic, the World Food Programme has demonstrated an impressive ability to intensify its efforts. As the organization itself has stated, ‘Until the day we have a medical vaccine, food is the best vaccine against chaos.’”

Andrés’ World Central Kitchen also made a tremendous impact as they rescued not only the hungry but restaurants and displaced workers as well. The nonprofit directly paid thousands of US restaurants to make their own relief meals for their communities, helping food businesses keep their doors open while encouraging them to feed the hungry. They were reportedly able to produce over 250,000 fresh meals daily, feeding over 15 million people not only in the United States but around the world since the pandemic began.

In the Philippines, great efforts have been made by restaurateurs, too. I previously wrote about the efforts of #FrontlineFeedersPH, a group that bridged the desire of generous hearts to help feed front-liners to restaurants and volunteers who had the capacity to produce the food.

We were all inspired by the community pantry movement, some of which continue to this day. Others started their own soup kitchens. At St. Anthony de Padua in Singalong, Manila, priest Benny Tuazon started Kusina ni San Antonio. Twice a week, they provide not only soup but cooked food for the first 100 persons in line. (For those who want to donate, call 0918-9070506.)

Sadly, the world continues to battle hunger and the pandemic has made the hunger stats even worse. One of the Sustainable Development Goals is to “end hunger, achieve food security and improved nutrition, and promote sustainable agriculture” by 2030.

But even then, the UN’s State of Food Security and Nutrition in the World 2020 report said “the food security and nutritional status of the most vulnerable population groups is likely to deteriorate further due to the health and socioeconomic impacts of the COVID-19 pandemic.”

It’s easy to feel helpless when you read reports like this and see people dying of hunger. But when you see the actions of civilians like Andrés, we remember that even a private citizen can mobilize and inspire many to feed the hungry. We also saw this spirit in Ana Patricia Non, who started the community pantry movement that grew organically.

After all, peace is not achieved by one individual alone, not even a Nobel laureate.