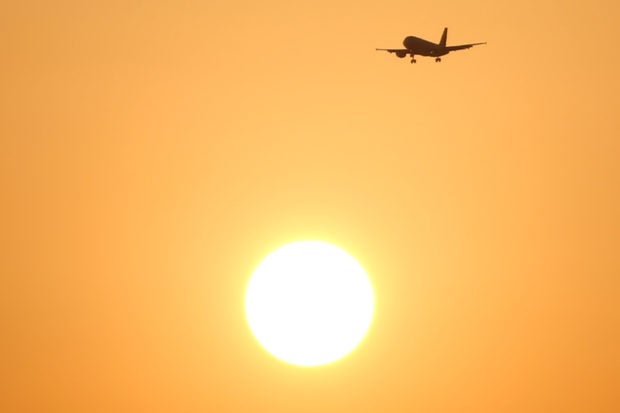 A passenger aircraft flies past the sun at sunset in Malaga, southern Spain, August 3, 2018. REUTERS

BOSTON — Global airlines on Tuesday wrapped up their first meeting since COVID-19 brought their industry to its knees, voicing optimism about pent-up demand but desperate for governments to harmonize disjointed border rules to avoid slipping back into recession.

The International Air Transport Association (IATA), which groups 290 airlines, said confusion over travel restrictions were holding back the industry’s fragile recovery after the pandemic plunged air travel into its worst ever downturn.

“People want to fly. We’ve seen strong evidence of that,” said Director General Willie Walsh. “They can’t fly because we have restrictions that are impeding international travel.”

IATA expects international travel to double next year compared with the depressed levels seen during the pandemic and reach 44% of pre-crisis 2019 levels. In contrast, domestic travel is tipped to reach 93% of the pre-pandemic levels.

The trade group, which includes dozens of state-owned carriers, blamed that gap on wide variations in entry rules and testing requirements in the top 50 air travel markets.

Even some of the airline and leasing company leaders trying to attend the industry’s annual gathering in Boston were unable to travel or had to carve out extra time for quarantine.

Airlines called for an end to restrictions on vaccinated travelers and for common health protocols at borders, though global coordination in aviation tends to move at a deliberate pace.

“Frankly, governments haven’t made it easy for airlines or for the traveling public to understand what the rules are to fly,” said Joanna Geraghty, president of JetBlue which hosted the gathering in a hotel shared with domestic tourists.

Even so, the head of Dubai’s Emirates, who has been among the most bullish executives on the prospects for recovery once restrictions end, said bookings in markets that were reopening like Britain and the United States had “gone up exponentially.”

“That reflects a bow-wave of demand that we are seeing everywhere,” its president Tim Clark said. “The demand for air travel will restore itself… sooner rather than later.”

Airlines were buoyed by the Biden administration’s plan to reopen the United States in November to air travelers from 33 countries including in Europe on the vital trans-Atlantic run.

But airlines left the Boston gathering as they had arrived, with severely strained balance sheets, and Clark said most would remain risk-averse and focused on recouping cash for 2-3 years.

IATA warned serious challenges remained for carriers, while venting frustration at airports and other suppliers for not doing enough to share the pain inflicted by the crisis.

While the White House has not set a date for lifting travel restrictions on Europeans, JetBlue expects it to happen ahead of the U.S. Thanksgiving holiday next month.

“If the reopening is delayed, we are going to face consequences across the industry,” Chief Executive Robin Hayes said after chairing the Oct. 3-5 conference, which also agreed a target to reach net zero emissions in 2050.

United Airlines Chief Executive Scott Kirby said the bookings for trans-Atlantic flights last week were higher than at the same period in 2019.

The world’s largest leasing company, AerCap, said a successful reopening of the world’s most important long-haul market would set a trend for other markets to follow.

“Airlines… don’t have the resilience they had,” Chief Executive Aengus Kelly told an audience of airline leaders. “They just can’t afford for this to go wrong.”