Today is the Feast of Our Lady of Peñafrancia. A big, loud happy fiesta to all Bicolanos and devotees!

Technically, we can travel to Naga, which is currently under general community quarantine (GCQ). Leisure travel from Metro Manila to areas under GCQ and modified GCQ is allowed, subject to local government guidelines. But given it is only point-to-point travel, you may just be stuck in your hotel upon arrival and miss the festivities. So we will just celebrate the fiesta vicariously through food and prayers.

Our Lady of Peñafrancia, the patroness of Bicol, is endearingly referred to by her local devotees as “Ina” (mother).

Her original image is in Spain, at the Sanctuary of Our Lady of Peña de Francia, located on the Peña de Francia mountain in Salamanca. It is reportedly the world’s highest Marian sanctuary.

Its origins are unknown but in the 1400s, Simon Vela, a Parisian from a well-to-do family who gave up his inheritance to become a chamber boy in the convent of the Franciscans in Paris, journeyed to the distant and steep mountains of Peña de Francia in Salamanca after hearing instructions from the Blessed Virgin herself in a dream. “Go to Peña de Francia west of this country, and there you will find the shrine of the Blessed Virgin Mary,” he was reportedly told.

He embarked on the journey and, upon finding the location, contracted men from the nearby town of San Martin del Castañar to assist him. On May 19, 1434, they found the most coveted image of the Holy Virgin with the Child in her arms embedded among the rocks.

In 1712, a Spanish officer from Peña de Francia arrived in Cavite. His son, Miguel Robles de Covarrubias, studied as a seminarian at the University of Sto. Tomas. While studying, he became seriously ill and prayed for healing through the intercession of Our Lady of Peña de Francia, clutching a photograph of her image and vowing to construct a chapel if cured. He was later ordained in Naga, then called Ciudad de Nueva Caceres, where he fulfilled his promise. He also asked a local sculptor to carve an image patterned after the photo he had of Our Lady of Peña de Francia.

After reports of many miracles, on September 20, 1924, Pope Pius XI granted the image a canonical coronation. This image may be found today at the Minor Basilica of Our Lady of Peñafrancia in Naga. 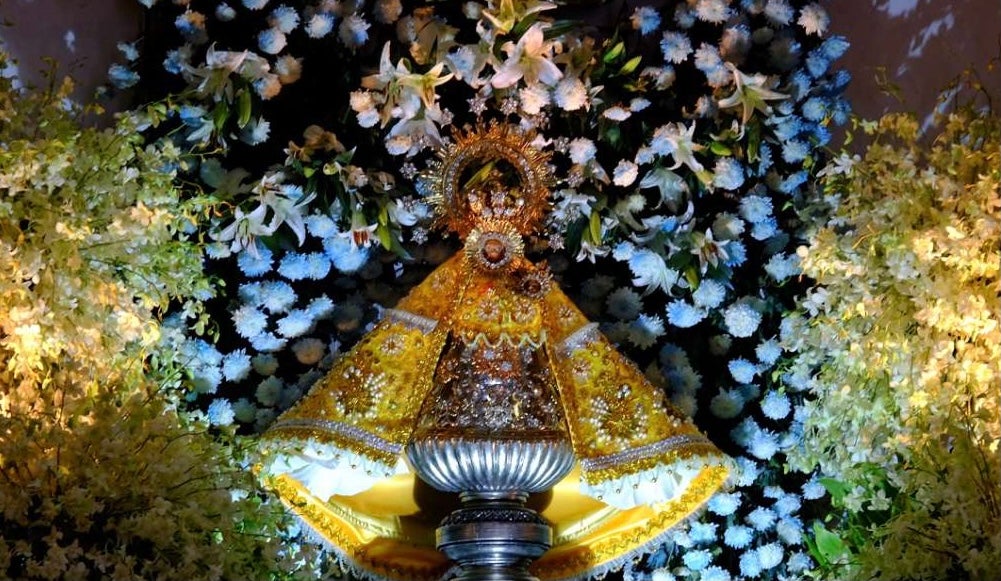 Our Lady of Peñafrancia on her Feast Day in 2017. —CONTRIBUTED PHOTO

The Peñafrancia Festival is a huge celebration in Bicol, with millions of devotees and tourists alike participating. It has extended beyond religion to become a true celebration of life for Bicolanos of all faiths, with concerts, parades, triathlons, etc. It has also been acknowledged as the largest annual Marian pilgrimage in Asia.

This year, due to the pandemic, the festivities will be more solemn than festive. Online masses will be held.

Of course, when there is a fiesta, there must be an abundance of food. But since we can’t travel, let’s do the next best thing by cooking some of these famous Bicolano dishes:

Tinutungang Manok: This is my personal favorite of all Bicolano dishes. On a trip to Albay, I got to watch 1st Colonial Grill’s chef Jeric Llandelar make this and he explained that the coconut meat (sapal) is cooked in a cauldron until it is toasted or resembling “tutong” (burnt rice). He advised to make sure that it is not burned black, otherwise it will become bitter instead of smokey. Once toasted, water is added to make gata or coconut soup. This becomes the tinutungang gata, which creates the cream for the stew. The unique thing about this is that it has a smokey flavor. This is then added to the chicken then served with slices of either green papaya or green saba. It’s a truly elegant dish although I first tried it at the very casual 1st Colonial Grill.

Adobo sa Gata: The quintessential Pinoy dish but with a Bicolano twist. This version uses coconut milk and siling labuyo. You simply braise the meat in the traditional adobo marinade but finish off with coconut milk. The result is a creamier adobo with a spicy bite.

Laing: In some areas, this is called pinangat na gabi. The original Bicolano version of this does not use shredded, but whole taro leaf called “natong” by some. A mixture of pre-cooked cubed pork, shrimp or fish flakes, plus crushed chili (siling labuyo), shallots, ginger and shrimp paste (bagoong alamang) is wrapped in the taro leaf and tied with lemongrass (tanglad). It is then steamed in coconut milk until the leaf pouches are fork tender and the gata is reduced to a thick sauce.

Ginataang Dahon ng Kamoteng Kahoy or Young Yuka Leaves in Coconut Milk. This is a fairly simple vegetable dish, though one may add pork belly or tinapa, that involves, yet again, just cooking the ingredients in coconut milk and adding siling labuyo. This would be perfect with steaming hot white rice.

Kinunot na Pagi or Spicy Stingray in Coconut Milk. This is really just a fish coconut stew, but if you don’t know how to clean the stingray well, leave it to the professionals or it may have a stench. Otherwise, it is a true delicacy.

Sili Ice Cream. When one visits Bicol, you can’t leave without trying the sili ice cream. As usual, it has coconut milk and, yes, siling labuyo. It’s an experience. At first bite, you think it is regular ice cream then two seconds later, the chili creeps in to surprise you.

There are so many more Bicolano dishes that won’t fit on this page. Perhaps with the guidance of Our Lady of Peñafrancia, you will find them. If Simon Vela found the buried image of Our Lady in the distant terrains of Peña de Francia, on the side of an uninhabited mountain, I’m sure you can easily find a Bicolano recipe to your liking.

Happy fiesta once again to everyone in Bicol and to all Bicolanos around the world. May our faith in the Lord, strengthened by our devotion to “Ina,” get us through this pandemic.

TAGS: Bicolano dishes, Feast of Our Lady of Peñafrancia