Last Supper: What was on the menu? | Inquirer Business
Close
menu
search

Last Supper: What was on the menu? 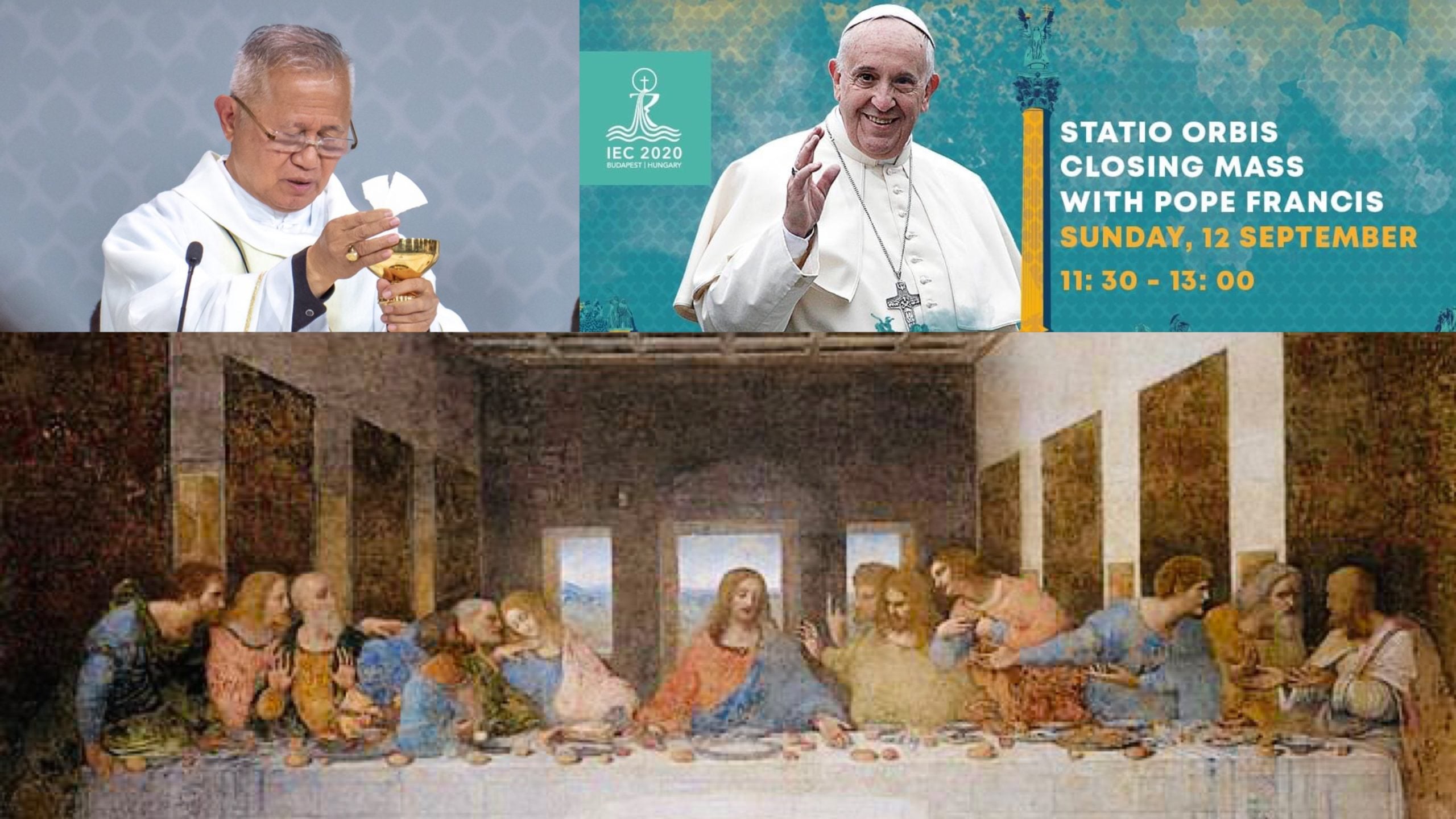 THE EUCHARISTIC CELEBRATION Clockwise: Archbishop Jose Palma presides for the Day of Peace Holy Mass at the International Eucharistic Congress in Budapest, Hungary. Pope Francis arrives today for the Statio Orbis or Closing Mass of the Congress. The Last Supper, the first Eucharist, as interpreted by Leonardo da Vinci. —CONTRIBUTED PHOTOS

Today there is a very special event happening in Budapest, Hungary. Pope Francis arrives to lead the Statio Orbis, or Assembly of the World, the culminating mass for the 52nd International Eucharistic Congress.

Catholics celebrate the Eucharist not only as a symbol or embodiment but as the presence of Christ himself. My great grandfather was Muslim and my father was Protestant so this concept is something that I did not accept until a few years ago. It’s certainly not an easy concept to digest because it is truly more spiritual than intellectual but here’s something appetizing for everyone, whatever your faith: communion. Don’t we all miss having dinner together with our closest friends?

This makes me wonder what the menu might have been served for that last meal, that final communion amongst friends in the Upper Room. Evidently, there was bread and wine. But what else?

Smithsonian Magazine shares the hypotheses of Generoso Urciuoli and Marta Berogno, archaeologists with a passion for food. They note the timeline in Mark 14: “After two days was the feast of the Passover, and of unleavened bread: and the chief priests and the scribes sought how they might take him by craft, and put him to death.” Arguing that the Last Supper was a Passover meal, they suggest that the menu likely included charoset, a paste-like mixture of fruits, nuts and sweet wine or honey. This delicacy is symbolic of the mortar used by the Israelite slaves when they laid bricks for the Pharaoh’s monuments.

They would likely also have been served cholent, also known today as the Sabbath Stew. This is a traditional Jewish stew of beans, simmered overnight for 12 hours or more and usually eaten for lunch on Shabbat.

There would also have been olives with hyssop, a small bush-like plant from the mint family, which is symbolic for cleansing. In the book of Exodus, hyssop was notably used as a kind of brush to dip in the blood of the sacrificed Passover lamb to smear on doorposts to distinguish the Israelites from the Egyptians.

Not as historically accurate as it is considered to reflect the time in which the artist rather than when Christ lived is Leonardo da Vinci’s Last Supper. But it is interesting to note that aside from the bread scattered on the table, there is also a plate of fish. One wonders what kind.

The internet says there is a debate on whether it is eel or herring. Some say that it could have been eel because preserved grocery lists from the 1400s shows da Vinci shopped for “bread, eels and apricots.” I would argue that it if there was fish it should be tilapia! After all, it was St. Peter’s fish or tilapia that was multiplied to feed 5,000, right? Though if it was my last meal I would probably request sea bass (specifically Chef Jessie Sincioco’s Chilean sea bass)!

Meanwhile, there is a debate on whether or not there was lamb, since the Bible passages of Matthew, Mark and Luke seem to refer to a Passover meal that would have included lamb. However, Pope Benedict XVI settled this by saying that it is John who was historically correct: “We are now able to say that John’s account of the passion is historically precise. Christ really did shed his blood on the eve of the Passover at the hour of the slaughter of the lambs.

However, he celebrated Passover with his disciples according to the Qumran calendar, therefore at least one day earlier—he celebrated it without lamb, as according to the traditions of the Qumran community, which did not recognize Herod’s temple and was waiting for a new temple. Christ, therefore, celebrated Passover without the lamb: no,—not without the lamb: in place of the lamb He gifted His body and blood. Thus, He anticipated the death with his words: ‘No one takes my life from Me, but I lay it down on my own’.

At the very moment He gives his body and blood to the disciples, He really is bringing his words to be. He himself offers His life. Only in this way does the ancient Passover obtain true meaning.

But certainly there was bread, likely unleavened. And certainly there was wine though I wonder what kind. I would argue that it must be like a first growth Chateau Margaux because if you are to say this wine is your blood, you might as well choose the best, right?

Archaeologists, however, have found a jar in an inland city of Judah with the inscription ‘wine made from black raisins,’ supposedly made using grapes dried out on mats in the sun to concentrate them and create a very sweet, thick wine.

This creates a strong wine, often mixed with spices and fruits, and even with resins like myrrh and frankincense to preserve the wine. This is supposedly similar to the Amarone of Northern Italy, which is made by drying grapes on straw mats before pressing to make into wine.

Wanting to enjoy this wine while the International Eucharistic Congress is ongoing, I found Amarone on Boozy for less than P3,000, although now out of stock. This is Bottega Amarone and it is made, just as the archaeologists described, by drying the select harvest on trellises and then ageing in small oak casks “to make vino degli Dei, or The Wine of Gods.”

In the meantime, with or without wine, let’s just fill ourselves with hope.

Hopefully, soon, we can also dine with our friends again, even if it has to be in a hidden Upper Room. Have faith.