Shifting to 24/7 renewables as a climate solution | Inquirer Business

Shifting to 24/7 renewables as a climate solution

The Intergovernmental Panel on Climate Change (IPCC) Working Group I’s recently released report entitled Climate Change 2021: the Physical Science Basis has just revealed “new estimates of the chances of crossing the global warming level of 1.5°C in the next decades and finds that unless there are immediate, rapid and large-scale reductions in greenhouse gas emissions, limiting warming to close to 1.5°C or even 2°C will be beyond reach.”

We are clearly running out of time.

Unless nations, businesses, and individuals take drastic measures now to lower their carbon footprint, our future generations don’t stand a chance of having a livable planet.

The COVID-19 pandemic has caused the whole world to spiral into the worst economic recession since World War II but it also gave us a temporary respite from carbon emissions as it fell by 6.4% or 2.3 billion tonnes in 2020.

This might be our only window so we cannot afford to waste it.

Considering that energy production and use account for 66% of global gas emissions, decarbonization by immediately switching to renewables is a must.

In the Philippines, First Gen-owned Energy Development Corporation (EDC) is at the forefront of generating power from renewable energy (RE), primarily from indigenous geothermal resources.

While it also has solar, wind, and hydroelectric power in its almost 1,500-megawatt (MW) pure RE portfolio, EDC has remained laser-focused on harnessing power from geothermal.

“Geothermal is considered the Holy Grail among RE technologies because of its inherent capacity to provide baseload power – or simply Geo 24/7,” said Allan V. Barcena, head of EDC’s Corporate Social Responsibility and Public Relations.

Geo 24/7 is EDC’s own brand of geothermal energy that has been supplying stable, reliable alternative energy to the country in a way that also preserves the environment and uplifts communities.

Geothermal is an inexhaustible source of clean energy from the earth’s heat. The mixture of hot water and steam, under its own pressure, will flow up the pipe that was drilled down three kilometers deep below the ground. Upon reaching the surface, water and steam go through a separator that sends the steam to the power plant through pipelines to generate clean 24/7 power.  The hot water, on the other hand, is cooled down at the cooling tower and injected back to recharge the geothermal reservoir. This technology of EDC called the Zero Discharge System ensures that no waste is leaked on the ground and into the water system.

The Philippines is blessed with an abundant source of this indigenous and site specific green energy that’s only found in countries along the Ring of Fire.

EDC’s 1,181MW geothermal portfolio accounts for 62 percent of the country’s total installed geothermal capacity, putting the Philippines on the map as the third-largest geothermal producer in the world. 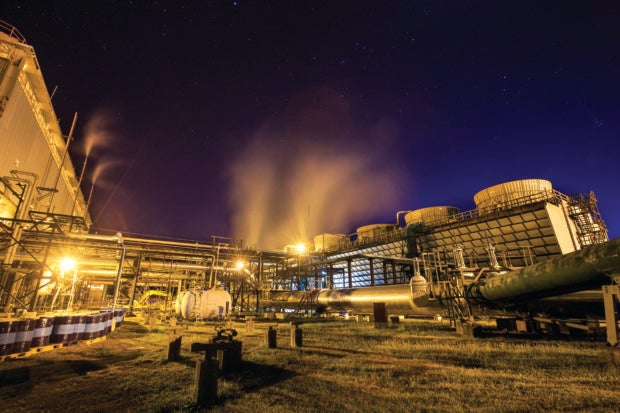 In particular, the Visayas region is home to the country’s two largest 24/7 geothermal facilities, which are EDC’s Leyte and Negros geothermal sites.

“As an indigenous and reliable 24/7 source of power, geothermal is way better than non-RE sources because aside from having minimal carbon emissions, it is not susceptible to external fluctuations of fuel supply and prices—making it an ideal source of power for businesses that want to lower their carbon footprint and for the government’s efforts to green our electricity grid through its various programs,” emphasized Barcena.

Apart from declaring a moratorium on the construction of new coal plants, the Department of Energy also implements the Renewable Portfolio Standards (RPS) that mandates electric and distribution utilities to increase use of RE by one percent each year beginning in 2020 until 2030.

Moreover, power customers with at least 500kW of monthly electricity consumption can now choose their own source and directly purchase it through the DOE’s Retail Competition and Open Access (RCOA).

This benefit will soon be available to businesses consuming at least 100kW of electricity once the DOE’s Green Energy Option Program (GEOP) is implemented. 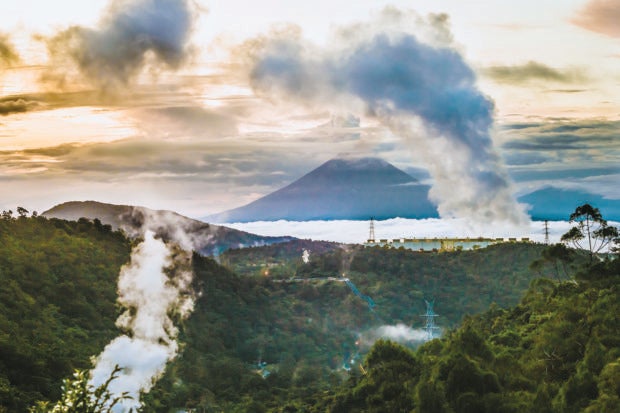 The 130MW BacMan Geothermal, Inc. owned by EDC is licensed to supply 24/7 clean renewable energy to businesses through RCOA and GEOP

“These retail electricity programs of the DOE allow eligible power customers to take a stand for the environment as they decarbonize their operations and at the same time, lower their electricity cost,” said Barcena.

EDC’s BacMan Geothermal, Inc. and Green Core Geothermal, Inc. facilities both have retail electricity supply and GEOP licenses to power businesses better and help them achieve their net zero carbon targets, which is crucial in the world’s fight against climate change.

Beyond providing a stable source of 100% RE, EDC’s efforts to change the climate include going beyond sustainability that merely seeks to do less harm because it is no longer enough.

“We recognize the urgency of mankind’s grim situation on a planet that continues to accumulate more heat-trapping carbon dioxide. In this kind of situation, efforts to restore the world’s resources in incremental amounts are no longer enough to reverse the worrying pattern,” said Barcena.

As the whole world started battling with the COVID-19 pandemic in 2020, EDC and the rest of the Lopez Group to which it belongs have boldly committed to forge collaborative pathways for a decarbonized and regenerative future.

This daunting 10-word mission calls for the group to look at business beyond being profit engines and create more shared value on top of shareholder value by elevating everything it touches–from the environment; to customers; communities; investors; and co-creators composed of employees, contractors, and other partners.

EDC and its main product, Geo 24/7, are at the heart of this mission and the company knows that it cannot achieve this on its own.

“We need to collaborate with like-minded companies, organizations, and individuals that share a genuine commitment to inclusive growth and environmental restoration so we can create exponential positive impact together,” said Barcena.

Apart from helping companies and individuals shift to RE, EDC forges partnerships that help sustain the environment.

EDC’s mission includes maintaining and regenerating the forests in its areas of operation. The company has been planting, growing, and nurturing lush forests in its geothermal watersheds, which comprise 270,000 hectares or about one percent of the country’s total land area.

In 2008, EDC launched its BINHI greening legacy program to bridge forest gaps and bring back to abundance 96 of our threatened Philippine native tree species. To date, the company has already reforested close to 10,000 hectares in its geothermal areas, with over six million BINHI seedlings planted.

BINHI is likewise a community empowerment program that incentivizes the farmers’ associations in EDC’s communities for helping its dedicated Watershed Management Teams manage the forests in its geothermal areas. From slash and burn farmers or kaingineros, they were transformed into forest stewards after years of being exposed to EDC’s pioneering environmental practices.

Thanks to their help, the forest under EDC’s care absorbs over 1.7 million tonnes of carbon dioxide equivalent (tCO2e)  each year. Matched with its entire operation’s emissions of only a little over 966,000 tCO2e annually, EDC is a carbon negative company—probably the only one in this country where most businesses are just beginning to implement sustainable and low carbon practices.

The company has been relentlessly advocating for decarbonization among its customers and other partners to also help them improve their carbon footprint and work towards carbon neutrality.

In a country like ours where the power sector accounts for 51% of its energy-related carbon emissions, with extreme weather events becoming more frequent, the government’s ambitious target to reduce its carbon emissions by 75% come 2030 points us in the right direction towards defeating climate change. But we need to do it fast and on a larger scale.

This is where forging collaborative pathways with EDC, with as many individuals, businesses, and nations as possible is crucial. This is the only way to regenerate our planet with the very little time that we have left.

For more information on how to power your business better with Geo 24/7, visit https://www.energy.com.ph/shift-to-renewable-energy/.