Bitcoin jumps above $50,000 for first time since May | Inquirer Business
Close
menu
search

Bitcoin jumps above $50,000 for first time since May 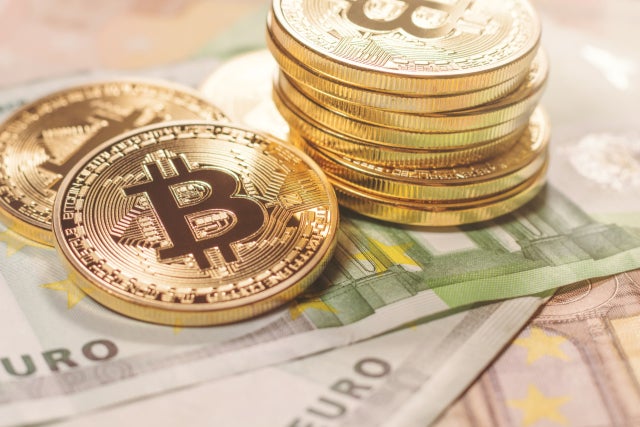 Bitcoin, the leading virtual currency, saw its price increased above $50,000 on Monday, August 23, 2021, the first time since May after supportive news from payments giant PayPal and cryptocurrency platform Coinbase. Image: IStock/Allexxandar via AFP

London, United Kingdom — Bitcoin rose back above $50,000 on Monday for the first time in three months after supportive news from payments giant PayPal and cryptocurrency platform Coinbase.

The world’s most popular virtual unit jumped to $50,440 during Asian trade, before easing to $50,350 in early morning London deals.

“Bitcoin continues its recent recovery, moving above the $50,000 mark it last attained in May though still some way short of its $65,000 record as PayPal announces plans to launch its cryptocurrency trading platform in the UK,” said AJ Bell analyst Danni Hewson.

PayPal has announced that it will this week begin to allow users in Britain to buy, hold and sell cryptocurrency through the online payment platform for the first time.

The expansion into the hot digital money trend follows similar moves by the payments giant in the United States earlier this year.

The US firm said its new service would allow UK-based customers to choose from four types of cryptocurrency: bitcoin, ethereum, litecoin and bitcoin cash.

They will be available both via the PayPal app and its website, with the expansion set to start this week and be available to all eligible customers within the next few weeks.

PayPal itself followed in March allowing people there to use cryptocurrency to make purchases from millions of merchants that use the financial platform for online transactions.

Bitcoin won another shot in the arm on Monday from last week’s news that Coinbase was plowing cash into the unit.

“The news last week that Coinbase will buy $500 million (427 million euros) in cryptos to put on its balance sheet and put 10 percent of quarterly profits into a crypto portfolio has lent support to sentiment,” noted Markets.com analyst Neil Wilson.

Bitcoin enjoyed a blistering run earlier this year but in mid-May, it began tumbling on a range of issues, including China’s crackdown on cryptocurrencies and Tesla boss Elon Musk’s decision to stop accepting it on concerns about the environmental impact of mining.

The electric carmaker has since indicated its support for bitcoin, while several other high-profile investors including Twitter founder Jack Dorsey have flagged their interest.

It has now risen more than 70 percent from the six-month lows below $29,000 touched in June, while speculation is swirling that it could begin its push towards $100,000.

However, Bitcoin is still a long way off its record just below $65,000 that it achieved in April.