Puregold Channel’s combined views for its first digital series “GVBOYS: Pangmalakasang Good Vibes”, showcased on their YouTube channel and Facebook page, have reached close to one million views and the good vibes just continue to roll in. Only two episodes and two weeks in however, netizens are already expressing their love for the show.

“GVBOYS: Pangmalakasang Good Vibes” has an endearing cast that includes Jerome Ponce, Nikko Natividad, Dave Bornea, Wilma Doesnt, Elsa Droga and Ms. Carmi Martin. This is Ponce’s first time to essay a role in comedy but states that he enjoyed playing Jawo, who is handsome but not quite smart. Natividad has some similarities with his character Daks, who is outgoing, friendly and street-smart. Bornea is Zeus, the boy with a few secrets. Moreover, Martin is a well-respected sitcom veteran whose body of work is impressive. 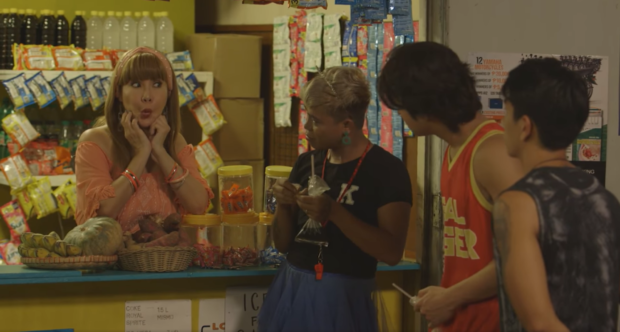 The comments of viewers on Puregold’s Facebook page show how much they enjoyed the fresh brand of comedy offered by “GVBOYS: Pangmalakasang Good Vibes.”

“Good vibes talaga hahaha…kelan next episode (when is the next episode)?” said Millie (not their real name).

Another viewer mentions, “Natanggal pagod sobra. Kelan next episode (This is such a stress reliever. When is the next episode)?”

“I watched until the end. Nakaka good vibes”, was also stated.

In the first episode, we were introduced to Jawo, Daks and Zeus and of course, Aling Pearly (Carmi Martin) and Kathryn B (Elsa Droga). The three boys live in Aling Pearly’s boarding house.

Toward the end of the first episode, we also meet Loisa Soberano (Wilma Doesnt) who had lent Aling Pearly some money with the boarding house as collateral.

In the second episode, which aired on July 17, Jawo, Daks and Zeus vow to help Aling Pearly pay off her loan in whatever way they can. With Kathryn’s help, Jawo gets a job as a movie extra, Dax finds a job and Zeus tries to sell his stuff online.

Additionally, they find out Zeus’ parents have hired a House Angel, named Avana, to help him with chores. When she arrives, Jawo and Daks become infatuated with her. Meanwhile, Loisa continues to hound Aling Pearly for payment and the boys plot to make her fall in love with one of them.

Read Next
FILREIT CEO leads the way
EDITORS' PICK
294 areas in NCR under granular lockdown — PNP
Huawei’s relentless mission to bring ultimate health and wellness tracking for your fitness goals
Smart reaffirms 5G leadership as PH’s most reliable 5G mobile operator
Pharmally’s Mago no longer in her condo unit — Gordon
4 essentials for overcoming data protection challenges in the New Normal
Gordon to Pharmally’s Mago: Show up or be a fugitive
MOST READ
Senators secure Pharmally exec offering to turn witness
Carlo Aquino reveals he almost starred in hit Korean series ‘Squid Game’
‘If it goes to Malacañang, so be it’: Lacson vows to follow evidence in Pharmally probe
Typhoon Lannie likely to intensify on Monday
Don't miss out on the latest news and information.