The image of the Philippine National Police has taken a beating over the past few years, due mainly to accusations of abuse and grave misconduct stemming from the implementation of the government’s all-out war versus illegal drugs.

The negative perception of some quarters, however, does not match the reality that there are significantly more police officers who fulfill their duty to serve and protect the Filipino people than renegades who tarnish the image of the PNP.

And it is these upright cops that Ayala Corp. wants to recognize through the inaugural Pulis Magiting x Pinoy Magiting Awards, a joint program of Ayala Foundation and the PNP.

Launched at the PNP headquarters in Camp Crame on July 6, Pulis Magiting X Pilipinong Magiting recognizes uniformed personnel who demonstrate the virtue of “kagitingan”—courage or valor—in the performance of their role, or even beyond the call of duty. 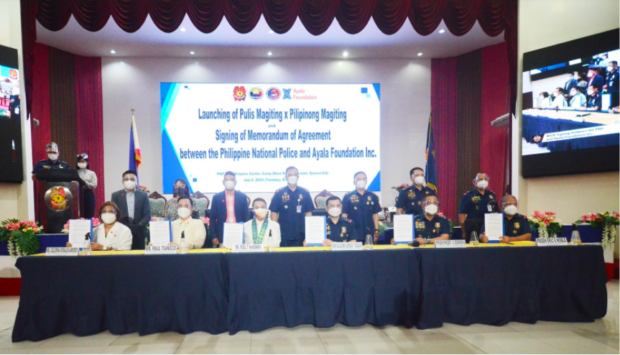 Each awardee is chosen based on how they have shown a clear love for country and their local communities, by serving with integrity, honesty and honor.

Among the awardees were Police Lieutenant Jean Aguada, who did not think twice about breastfeeding a crying baby she found in Barangay Old Capitol Site, Quezon City, and Police Corporal Maxine June Parochelin from Iloilo, who distributed face shields and grocery items for people in her community, from the early days of the COVID-19 pandemic.

Also recognized was Police Sergeant Jason Publico of Negros Oriental who was off duty but still helped evacuate a PWD from his burning house.

The Ayala Group and the PNP hope that by shining the spotlight on these exemplary officers, they can inspire and be models for other police officers to emulate.

Pulis Magiting X Pilipinong Magiting will recognize every month 15 to 20 police officers who show their pride in being Filipino by doing good and doing right, showing the different ways to express kagitingan in everyday life.

Each Pulis Magiting X Pilipinong Magiting awardee receives a certificate of appreciation, a cash award from GCash, and gift certificates from Chooks-to-Go.

Added Ruel Maranan, president of Ayala Foundation: “In celebration of our 60th anniversary, Ang Pulis Magiting X Pilipinong Magiting ay isang proyektong nabuo dahil sa paniniwala at pagkakaisa ng business sector at ng civil society, na kapag kinilala mo ang kabutihan ng mga pulis, pipiliin nilang maging magiting, at gagawin nila ang tama para sa kapwa at bayan.” (This project was formed through the cooperation of the business sector and civil society, knowing that if you recognize the goodness of police officers, they will choose to be heroic, and they will do what is right for their neighbor and the country.)

AFI decided to contribute to the PNP’s internal efforts to improve its ranks as it aligned and complemented AFI’s own Maging Magiting campaign.

This campaign, in turn, is under the even bigger Brigadang Ayala, the Ayala group’s united contribution to serving people and communities nationwide.

Initially a groupwide volunteerism program for the Department of Education’s Brigada Eskwela program, Brigadang Ayala expanded to include the disaster relief activities organized by Ayala Foundation and actively supported by the rest of the Ayala group.

Brigadang Ayala serves as the umbrella campaign for various integrated response to its almost two century-old commitment to national development by doing various social development and corporate social responsibility initiatives—ranging from disaster relief and response, assistance for public education, championing of social enterprises, and public health advocacy, among others.

Specifically through the Maging Magiting campaign, Ayala Foundation works with the Department of Education, National Historical Commission of the Philippines, the Ayala group, and members of the private sector to promote love of country and pride in being Filipino by recognizing extraordinary acts of heroism by ordinary Filipinos.

All of these activities are aligned with the 187-year-old Ayala group’s continuing commitment to nation-building.

Maging Magiting started with the distribution of the Philippine flag to schools and government offices nationwide to promote love for country.

It has since expanded to recognizing various expressions of that patriotism and everyday heroism, to emphasize Ayala Foundation’s long-standing commitment to the Philippines and to the Filipino.

This steadfast commitment is in fact enshrined in the foundation’s vision of communities where people are productive, creative, self-reliant, and proud to be Filipino.

The Pulis Magiting program contributes directly to the fulfillment of that vision.

“With Gen. Eleazar now heading the PNP, we are reviving the Pulis Magiting program to encourage uniformed personnel to do what is right and honorable,” said Maranan.

“We believe that recognizing remarkable, virtuous police officers will serve as a model for the 200,000 plus police officers nationwide. By showing that there are virtuous officers, more officers like them will be inspired to do the same and stay true to the PNP mission ‘to serve and protect’, Maranan added.

The initial batch of awardees were selected by a committee composed of officials from each participating regional office, together with representatives from the Ayala group.

“It is actually a good surprise to see many nominees for the first batch, showing that there is quite a lot of police officers who choose to be magiting. As the program continues in the coming months, we hope to see more and more police officers being recognized for their kagitingan,” he added.