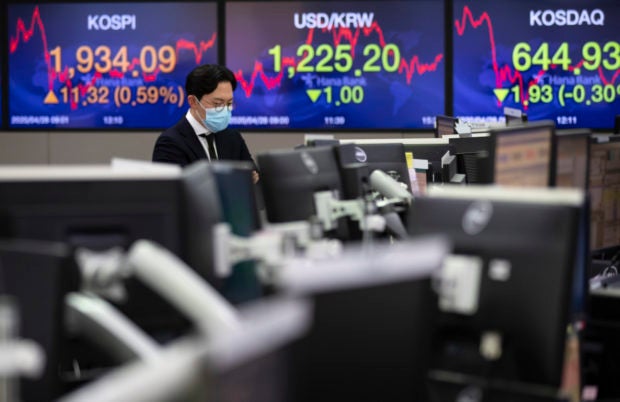 HONG KONG – Asian markets were broadly down Thursday after the Fed signalled a possible inflation-induced policy change, while concerns lingered over China’s crackdown on tech giants.

The Federal Reserve said Wednesday that while rising prices were expected as the US economy recovered from the pandemic, the inflation jump was higher than expected.

Officials said the US central bank needs to be ready to pull back on its massive support programme if this persists, according to minutes from a June policy meeting.

But it gave no indication that a reversal was imminent — a stance consistent with commentary from Fed chair Jay Powell that did not jolt the market.

US markets appeared ready to set aside inflation fears — at least for the time being — with Wall Street finishing modestly higher as both the S&P 500 and Nasdaq edged to records.

“It took some time, but the Fed has finally acknowledged rising inflationary forces,” Louis Navellier, Chairman of Navellier & Associates, said in a note to investors on Wednesday.

“That’s no small adjustment, but the market has currently bought into the ‘transitory inflation’ narrative –- until the key June inflation data rolls in next week.”

The strong overnight lead from Wall Street provided some boost in Asia but Tokyo was down Thursday morning with possible gloom on the horizon as the Japanese government debated further Covid-19 lockdowns to fight a surge in infections.

Seoul was higher, as was Sydney where investors did not seem affected by news that the lockdown in Australia’s biggest city could be extended.

Wellington and Singapore were also down.

Authorities this week suggested they could revise rules for Chinese companies listed overseas — a move that would clip the wings of major firms such as Alibaba, Tencent and Bytedance and potentially limit their ability to attract foreign capital.

Investors were more upbeat in mainland China, where markets opened up on indications from Beijing that it would increase support to business, in part by expanding the liquidity available to banks.

The triumphant recovery from the pandemic in the world’s second-largest economy had shown signs of slowing in recent weeks, with key factory data edging down in June and factory gate inflation soaring.

China’s State Council said Wednesday following a meeting that it was prepared to “use monetary policy tools… to enhance financial support to the real economy, particularly to smaller businesses.”