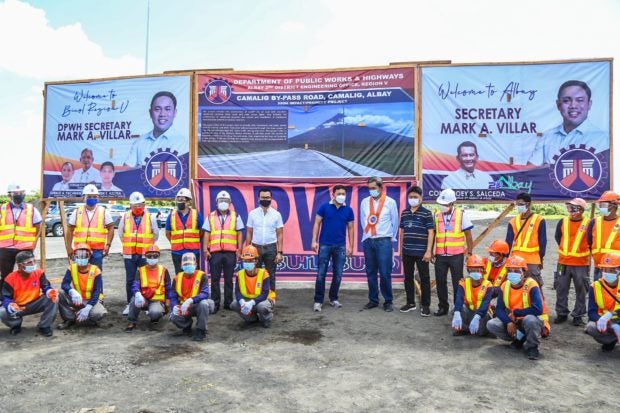 The Camalig Bypass Road was officially opened by Public Works and Highways Secretary Mark A. Villar on June 15.

The aggressive rollout of flagship infrastructure projects amid the pandemic is helping Bicol Region gear up for economic recovery.

Despite the restrictions and disruptions caused by this unprecedented health crisis, the Department of Public Works and Highways (DPWH) continued to make significant headway in the government’s “Build, Build, Build” program. Just last week, the DPWH unveiled the completion of yet another project that is expected to “to assist in the income-generation of small-scale establishments and farmers in the area.”

The P237.44-million Camalig Bypass Road was officially opened by Public Works and Highways Secretary Mark A. Villar on June 15, enabling this 3.5-kilometer road to safely divert traffic in Camalig, Albay while showcasing the breathtaking, panoramic view of the world famous Mayon Volcano.

“A new bypass road complete with shoulder, drainage, solar lighting, and road safety markings and signages will provide the people of Albay not only faster, safer route than the congested Camalig town proper road, but also a scenic view of the majestic Mayon,” Villar said.

“The completion of Camalig Bypass Road is another proof that we are committed to accomplish our major projects across the country before President Durterte steps down in 2022,” he added.

This newly opened thoroughfare is just one among the many strategic infrastructure projects in the Bicol Region that were already completed under the government’s ambitious “Build, Build, Build” initiative—touted to be instrumental in helping create quality jobs, provide opportunities for a more inclusive growth, and give the economy a much needed boost amid the pandemic. 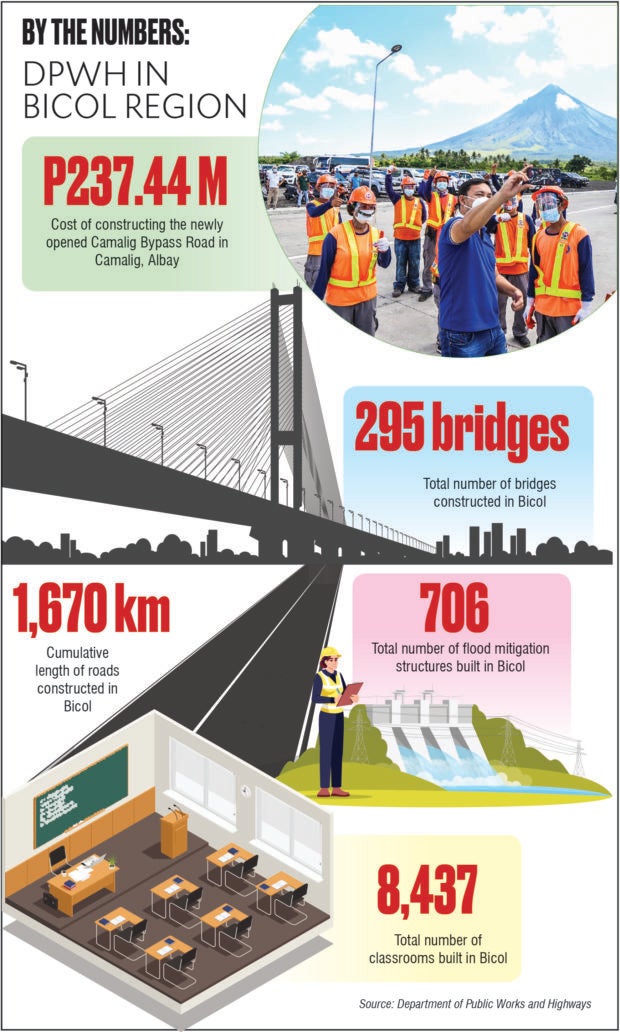 In Bicol alone, the DPWH has already completed the construction of 1,670 kilometers of roads, 295 bridges, 706 flood mitigation structures, and 8,437 classrooms—actual projects that have had a concrete positive impact on the lives of Bicolanos over the past several years.

Still in the pipeline are several other big ticket infrastructure projects most awaited by Bicolanos.

Data from the DPWH showed that the Albay-Sorsogon Connector Road would see the construction of a 15.87-km road including six bridges located along the east coast of Albay and Sorsogon provinces. Upon its target completion in December this year, this thoroughfare will link national secondary roads and will cut travel time between Manito Proper to Sorsogon City by an hour, benefiting some 5,000 travelers a day.

A 40-km tourism road will ensure accessibility to some of the region’s famous beach resorts. The Cagraray Circumferential Road will be situated along the barangays of Misibis, Cagbulacao, Cagraray, Cawayan, Pigcobohan extending up to Tambilagao and Langaton, Cabasan and Napao, all in the municipality of Bacacay. It is expected that upon its completion in December 2022, it can reduce travel time from Cagraray Island going to Bacacay Town Proper by more than half to one or one and a half hours.

Meanwhile, the 15.21-km, four-lane Camarines Sur Expressway is seen to drastically cut travel time between the municipalities of San Fernando and Pili to a mere 11 minutes from the current 51 minutes, according to data from the DPWH.

All these infrastructure projects, alongside the timely rollout of vaccines, are expected to help Bicol Region to bounce back to its pre-pandemic levels.

To recall, Bicol was the fastest growing region at 7.4 percent in 2019, even exceeding the country’s gross domestic product (GDP) growth of 5.9 percent for the same period. It also topped the regional economies with a 6.2 percent per capita growth.

With infrastructure development touted by some quarters as the best driver of economic growth, Bicol Region is indeed well poised and primed for a timely recovery from the ill-effects of the pandemic.