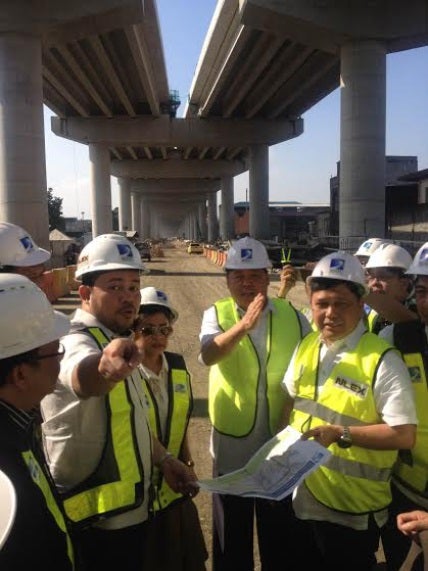 The “Build, Build, Build” initiative is getting back on track, with the government looking to spend a record P1.02 trillion this year and P1.25 trillion next year for infrastructure projects under its centerpiece program.

The existing pipeline of projects is designed to keep the momentum of robust infrastructure spending, which is seen to help the economy recover from a pandemic-induced recession. Also included in this lineup are infrastructure projects that reflect needs in the new normal, such as health facilities and information technology.

Currently, 11 of the 112 flagship projects have been already been completed while another 29 big-ticket infrastructure projects worth some P238.5 billion would be finished by the time President Duterte steps down from office 2022. 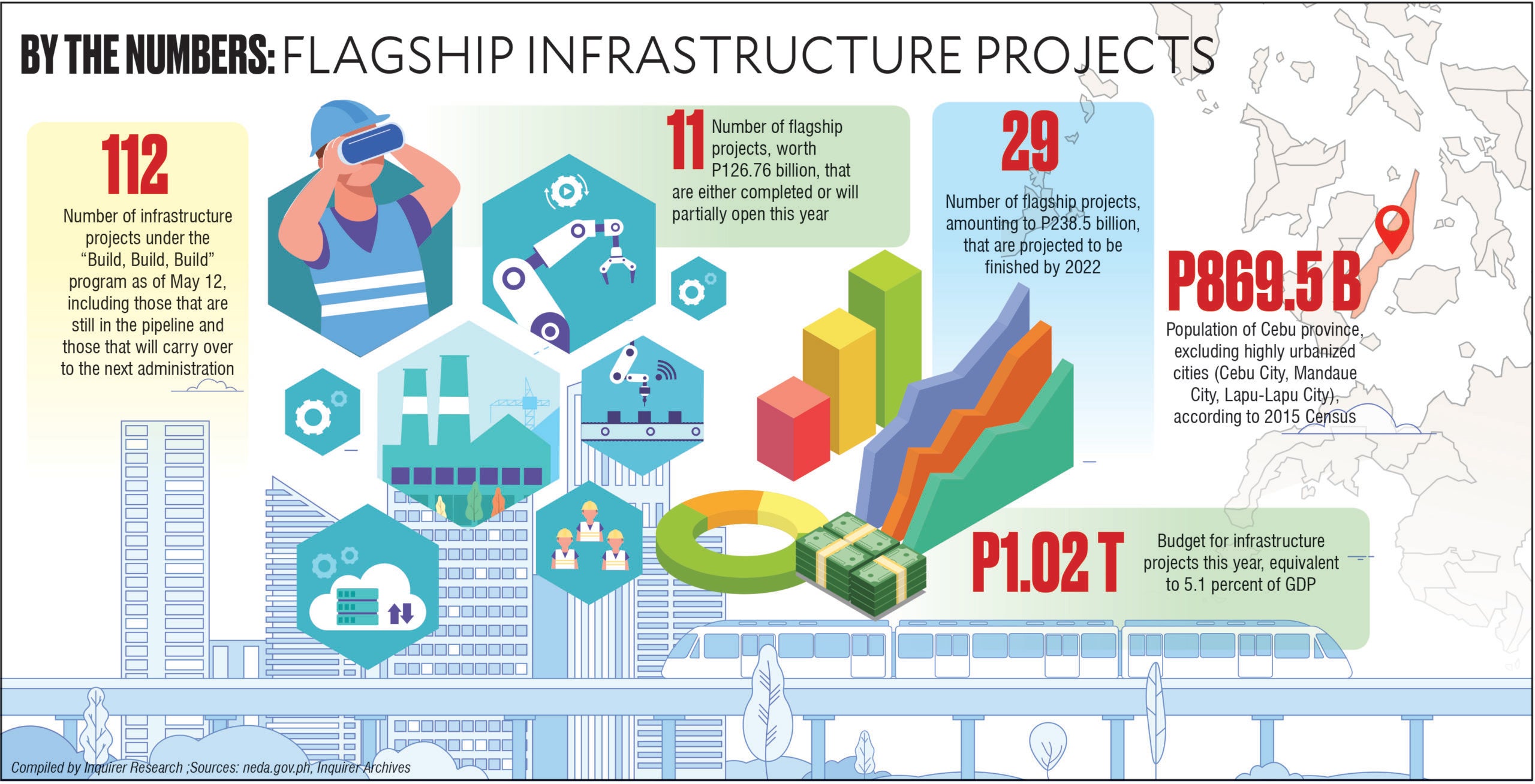 The Duterte administration can only hope that the next leader will carry on its much-touted infrastructure program which promises to transform Metro Manila into a more efficient and functional metropolis, and usher in a golden age of infrastructure.

Here are some of the biggest, most ambitious and necessary infrastructure projects in the pipeline.

1 The P735.7-billion New Manila International Airport in Bulacan will be financed by conglomerate San Miguel Corp. (SMC) through public-private partnership (PPP). It would rise in a 2,500-hectare property in Bulakan, Bulacan and will have enough capacity to serve at least 100 million passengers yearly, or three times the size of NAIA. Transportation Secretary Arthur Tugade said on June 18, 2021 that he had “no doubt” SMC will be holding a groundbreaking event to formally start the airport project within the next two months. 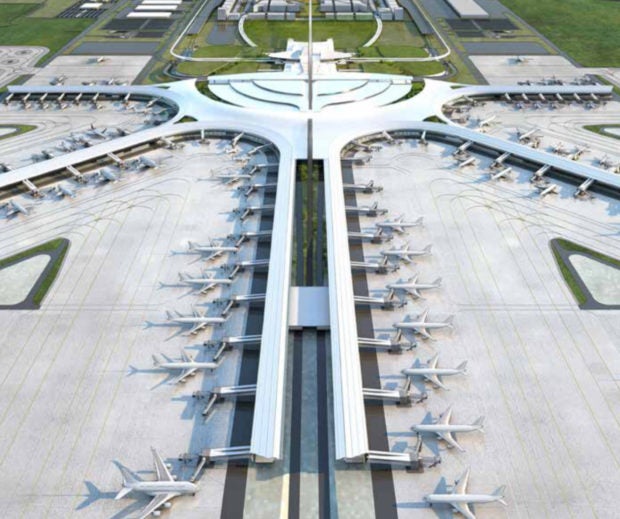 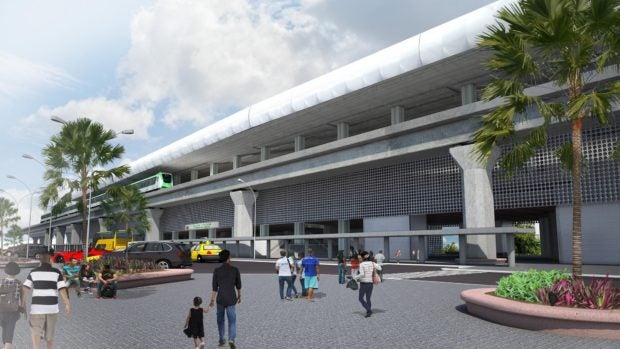 Artist’s sketch of the North-South Commuter Railway—Photo from DOTR, PIA

Of the NCSR’s P628-billion total project cost, P488 billion will be co-financed by the Japan International Cooperation Agency (Jica) and the Manila-based multilateral lender Asian Development Bank (ADB). The NSCR will eventually encompass 37 stations, 464 train cars across 26 cities and municipalities in Luzon. It can serve about 830,000 passengers daily once operational and has provisions for future expansion.

3 The P149.1-billion Philippine National Railway (PNR) North 1, a 38-km line from Tutuban, Manila to Malolos, Bulacan, is part of the NSCR system.

The segment, which began construction in February 2019, is expected to be partially operational by 2023 and benefit 200,000 commuters from the provinces of Bulacan and Pampanga who travel daily to Metro Manila.

It is said to benefit 100,000 passengers per day and will cut travel time from Manila to Bicol from 12 hours via car to just six hours. It will be financed through China’s official development (ODA).

5 The P11-billion New Cebu International Container Port (NCICP), which will be built on a 25-hectare reclaimed area in Barangay Tayud, Consolacion town in northern Cebu, will have its scheduled groundbreaking on Aug. 16 this year after years of delay.

NCICP’s design includes a berthing facility with a 500-meter-long quay wall that can accommodate two 2,000 twenty-foot equivalent unit (TEU) vessels at the same time; operating facilities and structures for containers; an access road and bridge; and a dredged waterway and turning basin.

Once the NCICP is complete, it will be serving international cargoes while the current Cebu International Port will be transformed into a domestic port and enable Cebu Port Authority to address the decongestion problem in the domestic operations. It’s funding source is through Korea’s ODA.

6 Described by former Socioeconomic Planning Secretary Ernesto Pernia as the “project of the century for the Philippines,” the P356.9-billion Metro Manila subway project phase is designed to accommodate 1.5 million passengers daily by 2026. 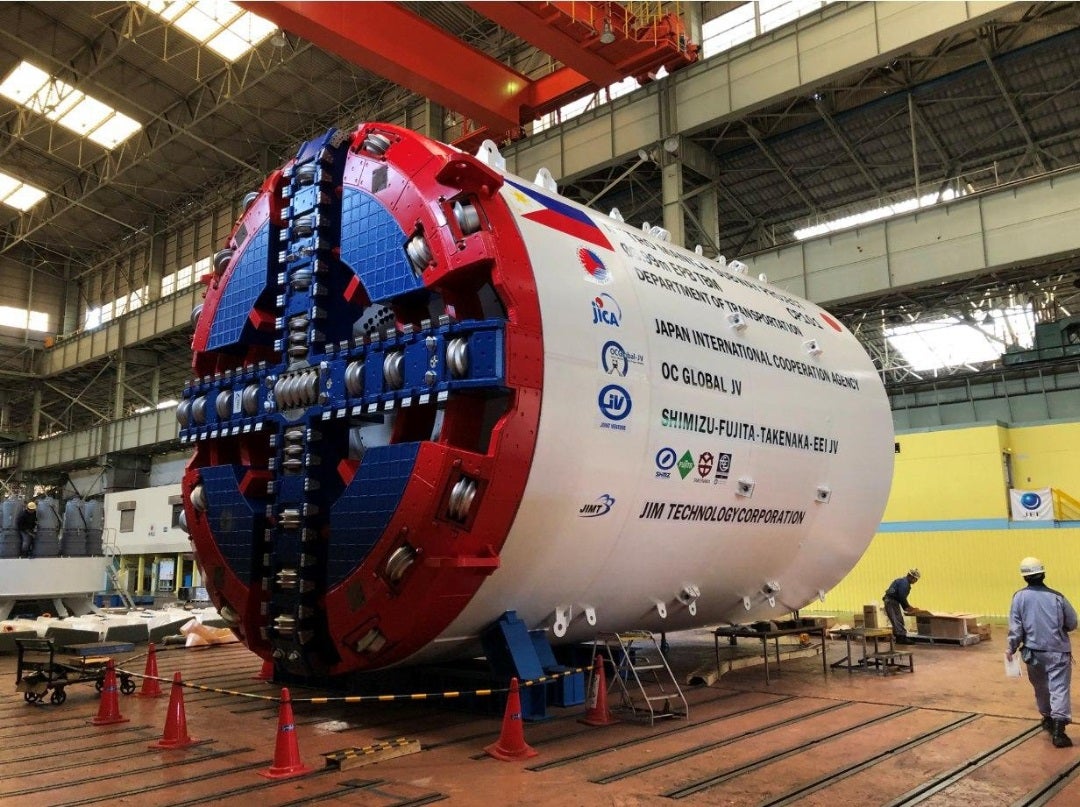 The first of the six Japan-made tunnel boring machines that will be used to dig underground and lay tunnels for the subway arrived in February this year. This followed the signing of a contract in December by the government with two Japanese firms for the commissioning of 240 train cars.

7 Another Japanese-funded railway project is the P21.97-billion rehabilitation of the Metro Rail Transit Line 3 (MRT-3) that started in May 2019. The rehab and maintenance work will overhaul the railway’s 72 aging cars, replace all main line tracks, upgrade signaling and communication systems and fix escalators and elevators.

The project has reached significant milestones within the past year as a record-high of 23 trains was deployed on the main line in January, up from the usual 10 to 15 running trains before the rehabilitation started. The MRT-3 also started running twice its usual speed at 60 km per hour in December, which was last achieved in 2013.

8 The extension of the 20.7-kilometer Light Rail Transit Line 1 (LRT-1) from its current station in Baclaran in Pasay City to a new station in Bacoor City, Cavite province, is seen to benefit up to 800,000 passengers per day. 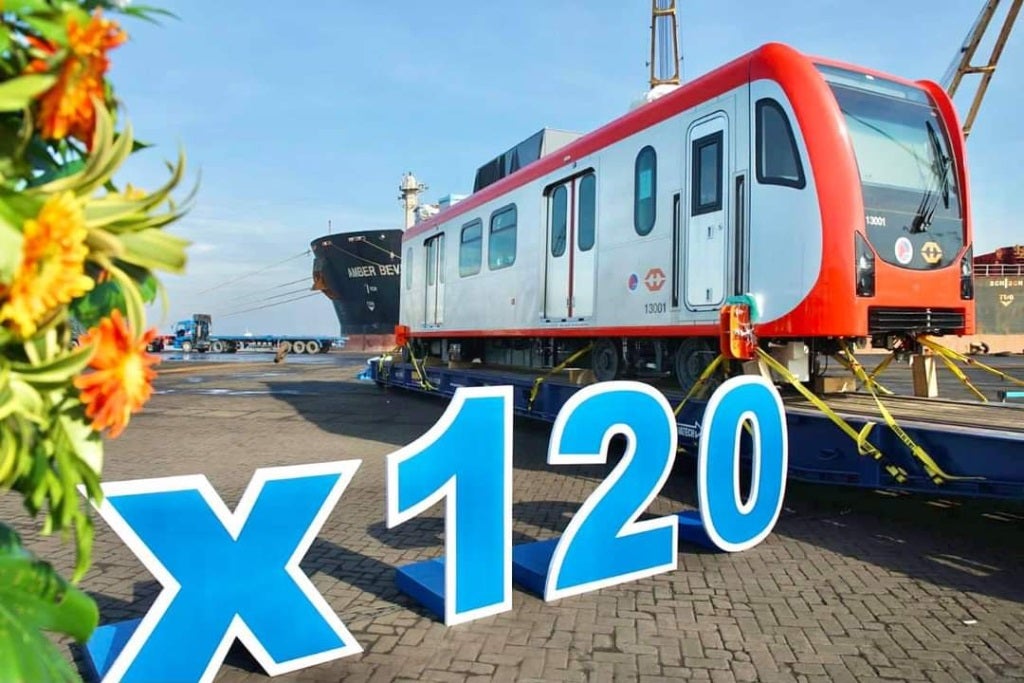 The first batch of train cars for the LRT-1 Cavite extension arrived in January.—Photo from DOTr

The P64.9-billion railway project, which is 57.9 percent complete as of February this year, is projected to be partially opened by the end of 2021. It will provide an alternative and convenient mode of transportation that will take commuters between Baclaran and Bacoor in just 25 minutes from the usual one-hour trip.

In January this year, the first eight of the total 120 train cars for the project arrived in the country from Spain and Mexico.

Set to be finished in 2022, the 8-kilometer expressway from C3 to the Metro Manila Skyway Stage 3 in Sta. Mesa, Manila, will cut travel time between NLEx and the SLEx to just 20 minutes. The first section of the project in the areas of Manila and Caloocan is 35 percent complete as of May this year.

10 Seen to be finished by yearend, the flood risk management project led by the Japan International Cooperation Agency will benefit vulnerable communities that are affected by flooding in the provinces of Cagayan, Misamis Oriental and Cavite.

It involves the construction of dikes, drainage sluices and retarding basins to mitigate damage brought about by flooding in core areas of the river systems of Cagayan, Tagoloan and Imus. Last year, Cagayan, a natural catch basin, was submerged in the worst flood to hit the valley in 40 years due to the onslaught of a typhoon.

Angeline Quinto admits she and Erik Santos tried being a couple