Megaworld records the largest inventory of leasable office spaces in the entire Bonifacio Global City with a total of 400,000 square meters in Uptown Bonifacio alone.

Megaworld Corp. led by tycoon Andrew L. Tan has proceeded to further secure its dominance of the country’s office sector, in anticipation of the inevitable rebound in demand for quality spaces alongside the recovery of the Philippine economy from the ravages of the COVID-19 pandemic. This is best evidenced by its continued development of high standard office spaces in the Bonifacio Global City, which is shaping up to be one of the country’s premier financial and commercial centers where the urban lifestyle has made it a coveted address by top local and international corporations. Here, Megaworld is already the biggest office landowner with a total gross leasable area of 847,329 square meters (sq m) with close to half of the leasable area housed within the sprawling 15.4-hectare Uptown Bonifacio township. And it continues to invest in the bright future of the bustling area. Uptown Bonifacio helps define the BGC skyline with its completed six towers—the flagship Alliance Global Tower and Uptown Place Tower 1, Uptown Place Tower 2, Uptown Place Tower 3, Uptown Eastgate and Worldwide Plaza. Worldwide Plaza has the distinction of being the future headquarters of the Philippine Global Service Center of JPMorgan Chase Bank NA, one of the world’s largest banking and financial services providers. The landmark deal forged by Megaworld and JPMorgan Chase to build the 25-storey, built-to-suit office tower with a gross leasable area (GLA) of 70,000 square meters has been described as the “largest single office leasing transaction in the Philippine real estate industry in terms of total space leased to a single company and transaction value”—a feat that has yet to be matched. Designed by UK-based award-winning architectural firm Broadway Malyan, the bespoke building for JPMorgan Chase features highly efficient office floors and innovative technologies in building design. The iconic tower is scheduled to be ready for full operations by 2022. 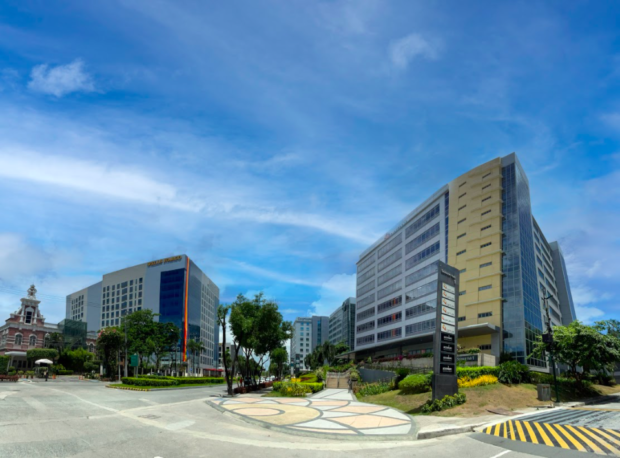 Big American companies such as Wells Fargo (left) are found inside McKinley Hill.

Soon to be added to Megaworld’s already impressive collection of office buildings in Uptown Bonifacio is the International Finance Center. To rise on 11th Avenue, the 24-storey International Finance Center, the seventh to be built in the complex, will be a Leadership in Energy and Environmental Design-certified office tower with 69,200 sq m of office spaces within a vibrant commercial and retail area just across from the Uptown Mall and adjacent to Uptown Parade. Following Uptown Bonifacio in terms of office footprint with 323,449 sq m is McKinley Hill, an integrated urban township on 50 hectares of land inside the former Fort Bonifacio military camp. The Italian-themed community with the ideal mix of residential, office, commercial, retail, sports and institutional components is a virtual mini-city. It is best known for its rows of campus-type office buildings that are all accredited as special economic zones for information technology, inspired by those in Silicon Valley in the United States. Companies that have made McKinley Hill their home are mainly into software development, data encoding and conversion, customer service, call centers, systems integrations as well as IT and computer system support. 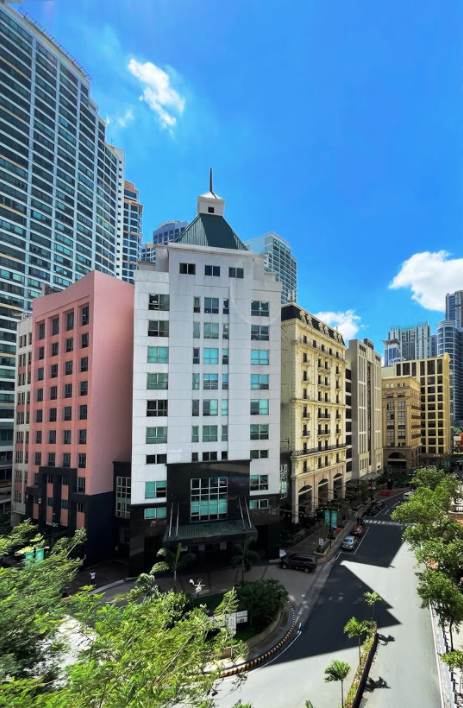 These European-inspired mid-rise towers across the residential row of Eastwood City house some of the biggest BPO companies in the country.

Complementing these office developments is the Venice Grand Canal Mall, deemed the “most romantic mall in the Philippines’ due to its Venice-inspired waterways and Ponte Rialto Bridge. The third major township within the Fort Bonifacio area is McKinley West, another 34.5-hectare township that is directly connected to McKinley Hill. It currently has eight office towers with a total gross leasable area of about 142,000 sq m. One of these towers is the 17-storey regional corporate headquarters of US-based financial research solutions provider FactSet. Locators and residents of McKinley Hill and McKinley West will soon benefit from the shared station fo the Mega Manila Subway. Megaworld’s Midas touch in township developments first manifested in the Eastwood development in Quezon City extends beyond the National Capital Region, exemplified by the flourishing Iloilo Business Park. Iloilo Business Park has nine office towers with a combined GLA of 100,000 sq m—the biggest for a single property developer in the entire Western Visayas. Megaworld, in fact, has a formidable 70 percent share of the office leasing marketin Iloilo. And more importantly, these are 100-percent occupied, mainly by new locators in Iloilo, attracted by the city’s deep human resources pool and the quality of the avaialble infrastructure and developments such as those brought to the market by Megaworld. Iloilo Business Park is an integrated urban township in a 72-hectare property in the district of Mandurriao, Iloilo City. The vision is to create the primary central business district in Western Visayas in the heart of Iloilo City, which has long been a center of higher education and commerce. That Megaworld has invested billions of pesos in Iloilo City is testament to the city’s great potential for further growth. Already, Iloilo City is deemed one of the country’s fastest growing highly urbanized cities in the country, having one of the country’s most modern airports, widest boulevards and busiest seaports. The Iloilo Business Park complements this growth by providing a business,tourism, commercial and residential hub. Here, there are clusters of residential condominiums, BPO office buildings, hotels, a lifestyle mall, retail strips, the iconic convention center, the biggest in the Visayas and Mindanao, and even a contemporary art museum. Around 54 hectares of the township are registered with the Philippine Economic Zone Authority as a special economic zone, allowing the locators and resgietered enterprises to benefit from special government tax rates and incentives. 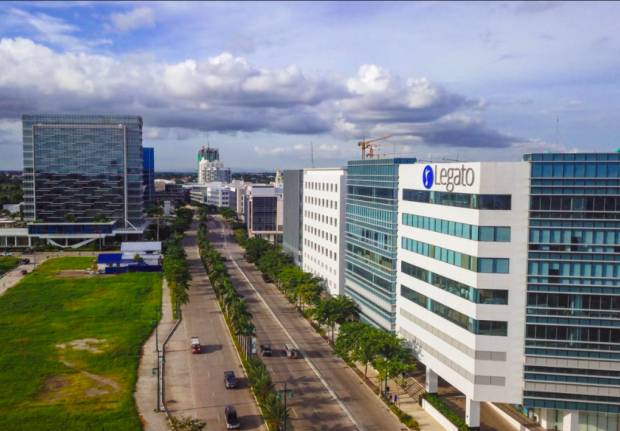 These mid-rise campus-type office towers line up the stretch of Megaworld Boulevard in Iloilo Business Park.

This mix of commercial, retail, office and leisure developments has made the Iloilo Business Park one of Megaworld’s most awarded townships. It was named “Best Township Development in Asia” and “Best Township Development in the Philippines” during the 2018 Asia Property Awards. The award-winning Megaworld brand of masterplanned township development that enhances the specific locality where the properties are located is replicated across the 26 townships across the country, of which 14 have office components. Combined, Megaworld’s office portfolio comes up to 70 office buildings across growth areas in Metro Manila, Cebu, Iloilo, Laguna, Pampanga and Davao with a total gross leasable area of 1.4 million sq m, the biggest leasable office footprint in the Philippines today—a feat that started at Eastwood City in Quezon City, which has remained a vibrant township with the third largest office space in Megaworld’s portfolio at 230,000 sq m. Across these office spaces are some 200 companies, including top Fortune 500 companies such as Wells Fargo, HP, JPMorgan Chase, Accenture, Canon and FactSet. Through the years, Megaworld has added an average of 100,000 sq m of new office spaces annually, except of course for last year and this year due to the construction delays and work stoppage brought about by the lockdowns to contain COVID-19.

But even with the pandemic, Megaworld’s office business has proven resilient with the company closing deals for new office leases last year. “With around 200 company partners that lease in our office properties, we hope to be able to greatly contribute to providing employment opportunities to hundreds of thousands of Filipinos who will enjoy working in our walkable communities. Even during a pandemic, our township concept has proven to be a thriving model of safety and sustainability—the common reason why many companies chose to relocate, expand or renew with us during this time,” says Roland Tiongson, first vice president of Megaworld Premier Offices. Around 135,000 sq m of fresh office space inventory were leased out in Megaworld’s townships in Iloilo, Quezon City and Fort Bonifacio. Of these, around 78 percent are part of the expansion programs of existing office partners with the balance taken up by new clients, another testament to Megaworld’s dominance in the office market. Aside from these, Megaworld has also signed up lease renewals for 145,000 sq m of office spaces from various company tenants last year, which makes the office business the most stable income generator of Megaworld. The plan is to continue to focus on the expansion of this part of Megaworld’s portfolio to further strengthen its leadership in the country’s office property sector. INQ.

No ‘cracks’ in Aksyon Demokratiko after Hilbay’s exit — party exec

Bato hits back at Tulfo: Who is he to conclude drug war is a failure?