The ornamentation of eternity

Ornamentation using calligraphy in the style of “Kufic script”

As I sit writing this, trouble quietly simmers in the Middle East. Israeli drones are still flying over Gaza City, and while the bombings have stopped for now, the animosity unfortunately hasn’t.

Ruled by the Ottoman Turks prior to the British occupation in 1917, this region of the world—now called Gaza and Israel, and once known as Palestine—is steeped in violent history, having been fought over by a long line of people mainly the Jews, Christians and Muslims. It was also occupied by the British, Persians, Romans, Greeks and Babylonians. I won’t go into its long and vibrant history, but I have to say that I’ve always been riveted by the significance of this place, from the days of the Crusades to the present-day conflicts. I am quite impressed that it managed to still be recognized as the “Holy Land.”

Because of its long history of conflict, the world perceives the language of communication in this region to be in acts of aggression, but the people from here are some of the smartest, kindest and most peaceful I know. And though deeply steeped in war and struggles, it is what makes it to be one of the most interesting places in the world. I have never traveled to this region, and it’s at the top of my postpandemic travel list with its neighboring states of Egypt, Jordan, Lebanon, and a little further north, Iran.

Architecturally, the main attraction in Jerusalem is the Islamic “Dome of the Rock” or the “Qubbat al Sakhrah” which was built in 687 AD, some 50 years after the death of the prophet Mohammed. It is one of Islam’s oldest monuments. The rock on which it sits is known as the Foundation Stone and is considered sacred to both the Jews and Muslims.

They say that it is here that Mohammed had ascended into the “Divine Presence,” and also where Abraham, the first patriarch of the Hebrews, prepared to sacrifice his son Isaac. It is also underneath this that the ancient Temple of Solomon was built. The architecture in Jerusalem is a symphony of styles with the “Dome of the Rock” designed in the architecture and ornamentation of the Byzantine era, similar to the Hagia Sofia in Istanbul.

What I’ve always found fascinating about Islamic architecture is the richness of its ornamentation. Compared to many other styles, the skin work on these structures is nothing short of a mathematical marvel, replete with small design elements measured out perfectly into placement, with rhythm, symmetry and pattern all falling into their proper settings. Not surprising, considering that the Arabs developed algebra, geometry and trigonometry.

Islamic art plays on the concept of variation, infinity and endlessness, building on the model of God and eternity, His vastness and all-encompassing presence concretized into our earthly domain. 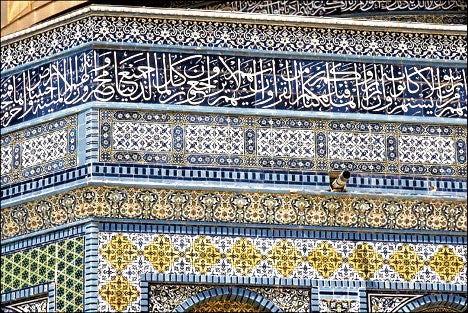 Intricate tilework framing the Dome of the Rock

One of the types of Islamic ornamentation are geometric patterns consisting of four basic shapes and expanding into more complicated patterns. These are four-sided polygons or squares, circles with interlacing circles, the five or six-pointed star pattern developed from the edges of circles that contain squares and triangles, and multi-sided polygons—all of which are conceptualized by way of the simple ruler and compass.

There is also the arabesque style of ornamentation consisting of plant and vegetal designs, flowers and blossoms, intertwining and employed as bands or fields that spread and crawl over large surfaces. Purely ornamental, these were decorative and not symbolic, unlike the real gardens found in homes and palaces which are designed to depict the beauty of paradise.

The use of figurative images of humans and other creatures of creation were limited and often assigned to non-religious structures. It was the belief that human beings are creations of God and are therefore not to be represented under the direction of human hands. 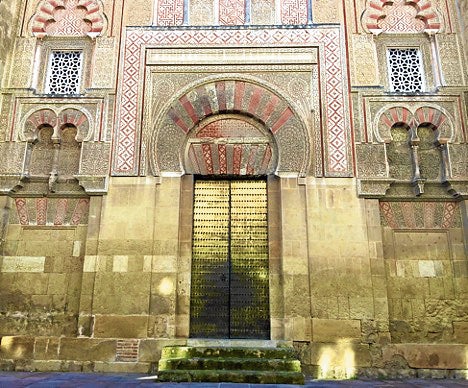 A side door of the Great Mosque in Cordoba, Spain

My favorite ornamentation is their calligraphy in the style of “Kufic script.” It is one of the most ancient calligraphic styles, having emerged as early as the 13th century in Turkey, Iran and Iraq. It also appears in other places of Islamic influence like Spain, Northern Africa and India. The texts often frame portals or run as bands and narrate passages from the Koran. I find Kufic script to embody so much elegance, its curves gracefully attaching to long vertical strokes, and the dots playing above and below them.

These ornaments and patterns were applied through different media. In the Dome of the Rock for example, extensive tiling requirements made use of multi-color glazed tiles largely due to the lack of timber in that region. This is common as well in Northern Africa. In other structures, gold mosaics were employed for dazzle and richness. And yet in others, simple stucco was carved and shaped into “muquarnas,” those ornaments that dripped from the vaulted ceilings the way stalactites would. 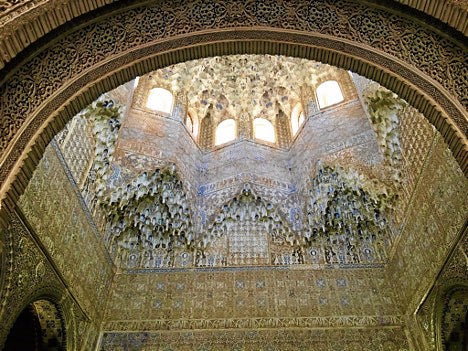 The walls are rich in colored tiles, carved stucco, muquarnas or the ornaments that drip like stalactites.

While many other religions see Islam as violent and hostile due to the West’s interpretation of its history in conflicts, or because of its splinter groups of extremists, the religion itself fosters love and peace just like all other religions do.

Looking at the beauty of these decorative elements, one cannot help but engage in its concept of oneness, of the interconnectedness of things, in the geometry that broadens and expands, in the leaves and blossoms that propagate, and in the calligraphy of words of wisdom and enlightenment. It is quite awe inspiring when seen in actual.

There are no simmering troubles anywhere on the face of these, only patterns that repeatedly flow into what was intended to be that eternity of peace and love. One day we’ll get there, too.