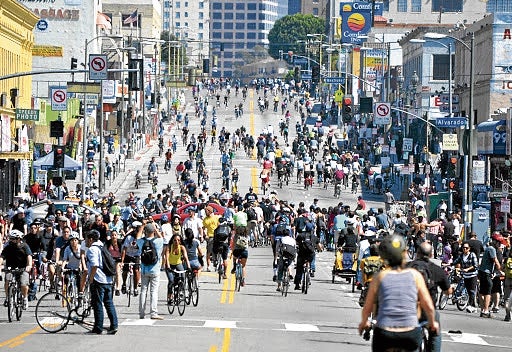 The Ciclovia in Bogota: time-sharing the streets by liberating them from cars a few times each year

(First in a series)

The Community Pantry phenomenon was a breath of fresh air at a time when people have been languishing through more than a year of quarantine amid the crippling effects of the economic crisis and surging pandemic cases. It was a wave of much needed hope that swept through a country that was on the verge of desperation.

What makes the Community Pantry so remarkable is that it revived an awareness of virtues we thought we had lost in contemporary society—humanism. It was a ground up, spontaneous effort that negated the notion of consuming beyond what is necessary, matching surplus with need. Its rules were social, not formal, and is motivated essentially by the most basic of social virtues—contributing to the well-being of others.

This builds what we sometimes refer to as social capital or community solidarity. These are values and motivations that have been reawakened, but are happening each day: doing household work, caring for children and the elderly, helping fix someone’s car, volunteerism, community work—non-monetary exchanges and mutual aid that do not count as economic activity but are crucial for society to survive.

We have become accustomed to certain realities of modern life: that businesses are inherently monopolistic and profit-oriented and that markets are inherently competitive and individualistic.

Human beings, however, are intrinsically cooperative. Community pantries demonstrated that the prevailing ethic governing our materialist society— the idea that I will only be of service to you if it is profitable for me to be so—can be opposed with humanistic goals. We were awakened by the possibility that social structures can be mobilized for purposes of advancing a civic life with civil values—the essence of cities themselves.

The city is not just a venue for the sharing of spaces, goods and services, but is a shared entity in itself—a shared creation.

However, the commodification of urban space and lifestyle has reduced our innate capacity to share. The concept of exclusivity has supplanted the idea of the commons and has permeated in various levels of the urban space, from gated communities, to private open space, to mobility. So much of our cities are built around the concepts of exclusivity and segregation—ideas so deeply embedded in modern culture that our built environment is now dominated by impermeable realms segmented by status and income. These have diminished the sense of mutuality and collectivism as a common feature of city life by limiting access to activities, places and experiences.

Take for instance mobility in our cities, a basic right that is unfortunately not equally available to all people nor to all forms of movement.

Private vehicle trips account for only about 25 percent of travel within the metropolis, yet space for cars occupy 80 percent of the road space and sometimes more. To enable movement for the majority of the population, some cities have resorted to costly elevated walkways—a spatial fix that reinforces exclusive use of space rather than democratizing the use of the street level.

Balancing space is a term used among placemaking practitioners: enabling spatial and temporal use of urban commons such as streets for pedestrians and cyclists as well as necessary vehicular traffic for deliveries, emergency vehicles and transit.

For many cities, streets are their only public assets. It is only logical, therefore, that these assets are more equitably distributed across all users to correct the dominance of the automobile. From a pragmatic point of view, the issue is not necessarily of dimension, but of capacity and efficiency. 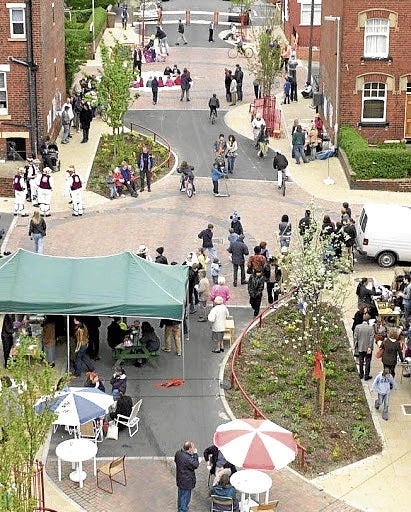 A shared street: space for people, nature, activities, oh and yes, cars, too

A typical urban road lane can move around 2,000 people per hour if they’re traveling by private car. The same lane can move 14,000 cyclists or 19,000 pedestrians within the same period. Distance is of course a consideration in the choice of mode of travel, but the numbers highlight the disproportionate allocation of space even within our city centers where travel distances are shorter.

The pandemic lockdowns prompted the need for equitable space and have begun to shift the priority towards active modes of travel, reclaiming car lanes for bikes, pedestrians and even as parklets—sharing space more equitably.

They have also highlighted that mobility is just one of the many uses of streets. Streets have traditionally been social spaces and prior to technology, streets were also the channels of communication. The evolution of city brought about by technology and socioeconomic changes led to higher spatial specialization and exclusion, and the consequent loss of the concept of the urban commons, and thus of shared spaces.

The paradox of urban commons is that physically, it is a rival good (no two people can occupy the same space at the same time). But socially, it is a non-rival good since its value and benefit increase the more people use it. Sharing street space is actually a low hanging fruit that addresses just the tip of a deep, complex and ancient issue of spatial inequity in cities.

But it is, just like the community pantries, a step towards redistributing the surplus of some for the benefit of many.