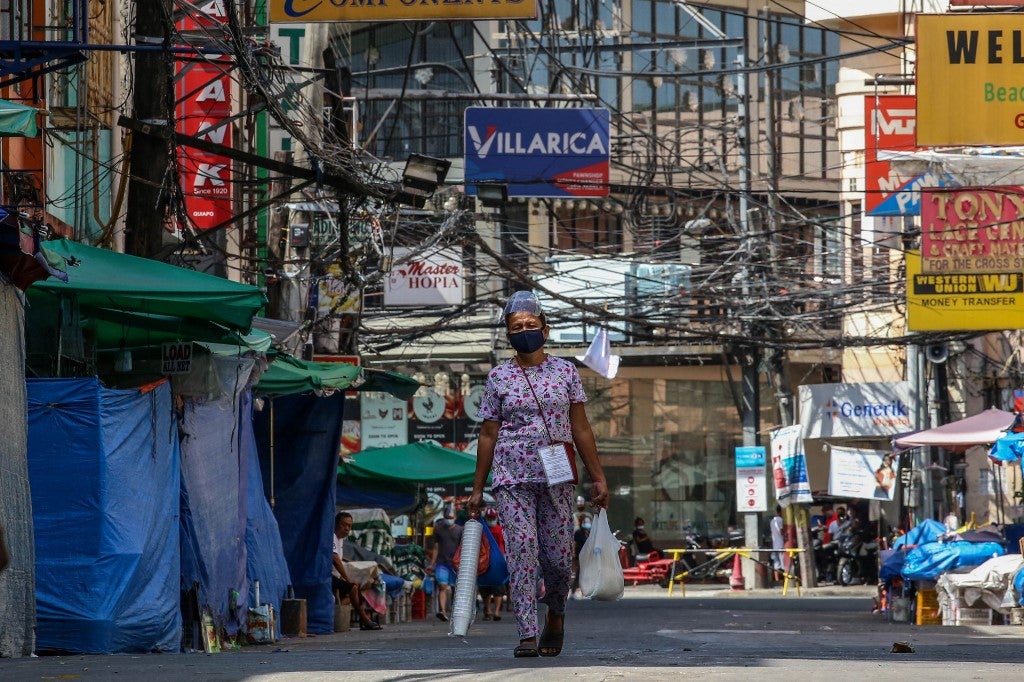 A resident walks along an almost empty street in Manila on March 29, 2021, on day one of the government’s imposing of a stricter lockdown, as hospitals in the capital struggle to cope with a surge in coronavirus infections. (Photo by Jam STA ROSA / AFP)

MANILA, Philippines — With greater uncertainty brought about by the prolonged COVID-19 pandemic, the Asian Development Bank (ADB) has slashed its growth forecast for the Philippines to at least 4.5 percent in 2021.

ADB country director for the Philippines Kelly Bird told a press conference that their latest forecast was a “floor,” which meant they expected the growth rate to be a minimum of 4.5 percent and could be higher.

“The economy is on recovery [but] it’s not as fast as we expected it would last year” when the ADB made its previous growth forecast, Bird said. It did not help that the emergence of new COVID-19 variants stalled some inroads in containing the spread of the deadly coronavirus, which heightened uncertainties on both the local and global outlooks, he said.

Bird said the updated growth estimate already took into consideration the reimposed tighter quarantine and expected delayed momentum in reopening the economy in “National Capital Region (NCR) Plus,” which accounted for half of the Philippines’ GDP.

As such, the more stringent ongoing quarantine would likely jolt the first-half economic performance, Bird said.

In a separate April 27 report, UK-based Pantheon Macroeconomics projected the second quarter to end the three preceding quarters of quarter-on-quarter growth amid gradually easing COVID-19 restrictions back then.

“A double-dip in the Philippines appears inevitable… The country suffered one of the deepest contractions in consumption last year, implying strong bounce potential. But pent-up demand appears to be evaporating quickly. Crucially, the likely strong hit from the stubborn second outbreak implies that the recovery in spending may need to start from square one. We now expect the economy to shrink by about 2-percent quarter-on-quarter in the second quarter, following an estimated 1.6-percent gain in the first quarter,” Pantheon Macroeconomics senior Asia economist Miguel Chanco said.

With prolonged quarantine measures affecting jobs, Bird said poverty would likely “remain elevated” this year. Last year, the ADB projected the poverty rate to have reverted to the higher 20-percent level amid the pandemic-induced recession.

Also, the ADO 2021 report said the pandemic and slow economic recovery may leave the Philippines’ labor market in a phenomenon called “hysteresis,” wherein “the unemployment rate continues to rise even after the economy has started to grow again.”

“Hysteresis can indicate a permanent change in the workforce from the loss of job skills making workers less employable even after a recession has ended. About one-third of the total workforce is in vulnerable employment, and this could swell with the observed shift from wage and salary employment to self-employment during the pandemic. This wiped out 1.7 million wage and salary jobs in private establishments and government in the 12 months to January 2021. In contrast, employment in the informal sector, mainly self-employed, rose by about 435,000,” the ADB said.

Bird was nonetheless optimistic that if the Philippines could ramp up mass vaccination to achieve herd immunity and resume consumer confidence, the global economy will recover faster, and the planned big-ticket infrastructure projects would come on-stream, its rebound may be faster than current ADB estimates.

While the ADB sees headline inflation breaching the government’s 2-4 percent target band to average 4.1 percent this year, Bird said they don’t expect the elevated rate of increase in prices of basic commodities to be a major problem.

For the part of the ADB, Bird said it had programmed to lend the Philippines a total of $3.9 billion across eight programs and projects this year to aid in recovery through support for infrastructure build-up, local economic development, as well as investment in people.