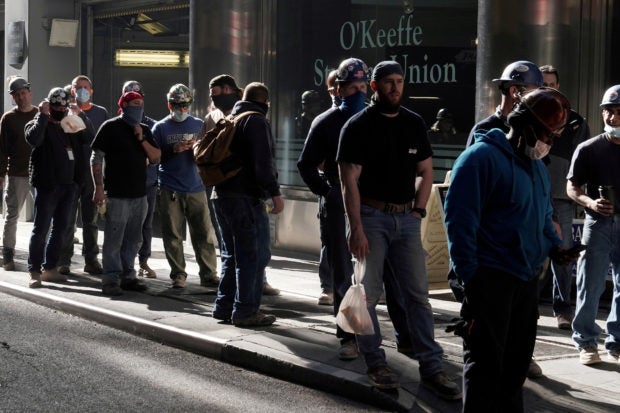 FILE PHOTO: Construction workers wait in line to do a temperature test to return to the job site after lunch, amid the coronavirus disease (COVID-19) outbreak, in the Manhattan borough of New York City, New York, U.S., November 10, 2020. REUTERS/Carlo Allegri/File Photo/File Photo

WASHINGTON — U.S. employers likely stepped up hiring in March amid increased vaccinations and more pandemic relief money from the government, which would cement expectations for a boom that could push this year’s economic growth to the strongest since 1984.

The Labor Department’s closely watched employment report on Friday is also expected to show people, mostly women, wading back into the labor market, drawn by those brightening economic prospects. But the labor market is hardly out of the woods yet, with the jobs deficit still huge and long-term unemployment becoming entrenched.

“The economy is on fire, fueled by vaccines and government stimulus,” said Sung Won Sohn, a finance and economics professor at Loyola Marymount University in Los Angeles. “All the stars are lined up to surprise us on the upside.”

Nonfarm payrolls likely surged by 647,000 jobs last month after increasing by 379,000 in February, according to a Reuters survey of economists. That would be the biggest gain since October. Estimates ranged from as low as 115,000 to as high as 1.1 million jobs.

Friday’s report marks a painful anniversary for the labor market. The March 2020 employment report was the first to reflect the mandatory closures of non-essential businesses such as restaurants, bars and gyms to slow the onset of the just-emerging COVID-19 pandemic. Nearly 1.7 million jobs were lost that month, and another 20.7 million would vanish the next.

Even if the March 2021 employment gains come in as estimated, it would leave the labor market roughly 8.8 million jobs shy of its peak level in February 2020. Economists estimate it could take at least two years to recoup the more than 22 million jobs lost during the pandemic.

As of Tuesday morning, the United States had administered 147.6 million doses of COVID-19 vaccines in the country and distributed 189.5 million doses, according to the U.S. Centers for Disease Control and Prevention. The White House’s massive $1.9 trillion pandemic relief package approved in March is sending additional $1,400 checks to qualified households and fresh funding for businesses.

That led to a significant improvement in labor market conditions last month. Reports this week showed a measure of factory employment jumped in March to the highest since February 2018, while layoffs announced by U.S. companies were the fewest in more than 2-1/2 years.

Employment gains last month were likely led by the leisure and hospitality industry, which has borne the brunt of the pandemic. A strong increase in hiring is expected at factories as well as construction sites after being held down by unseasonably cold weather in February.

Economists expect job growth will average at least 700,000 per month in the second and third quarters. That, combined with the fiscal stimulus and about $19 trillion in excess savings accumulated by households during the pandemic, is expected to unleash a powerful wave of pent-up demand.

First-quarter gross domestic product estimates go as high as an annualized rate of 10.0%. The economy grew at a 4.3% pace in the fourth quarter. Growth this year could top 7%, which would be the fastest since 1984. The economy contracted 3.5% in 2020, the worst performance in 74 years.

“Hiring is positioned to ratchet substantially higher as COVID cases are widely expected to continue to retreat, the economy more fully reopens as herd immunity is reached and the benefits of the fiscal stimulus, in part, fuel the release of pent up demand,” said Sam Bullard, a senior economist at Wells Fargo Securities in Charlotte, North Carolina.

Strong job growth likely pushed down the unemployment rate, which is forecast falling to 6.0% from 6.2% in February. The unemployment rate has been understated by people misclassifying themselves as being “employed but absent from work.”

The anticipated return of more people to the labor force could even raise the jobless rate. The labor force participation rate, or the proportion of working-age Americans who have a job or are looking for one, is expected to have inched up from near 50-year lows. More than 4 million workers, over half of them women, have dropped out of the labor force since February 2020.

The share of long-term unemployed Americans likely remained elevated in March, leading to an erosion of skills that could make it harder for many to find higher paying jobs. At least 18.2 million Americans were collecting unemployment checks in mid-March.

“The result is a scarring in the labor force that will be hard to overcome,” said Joe Brusuelas, chief economist at RSM in New York. “Studies have shown that the length of time that a person is out of work affects the probability of that person regaining employment.”