500 years of faith and food 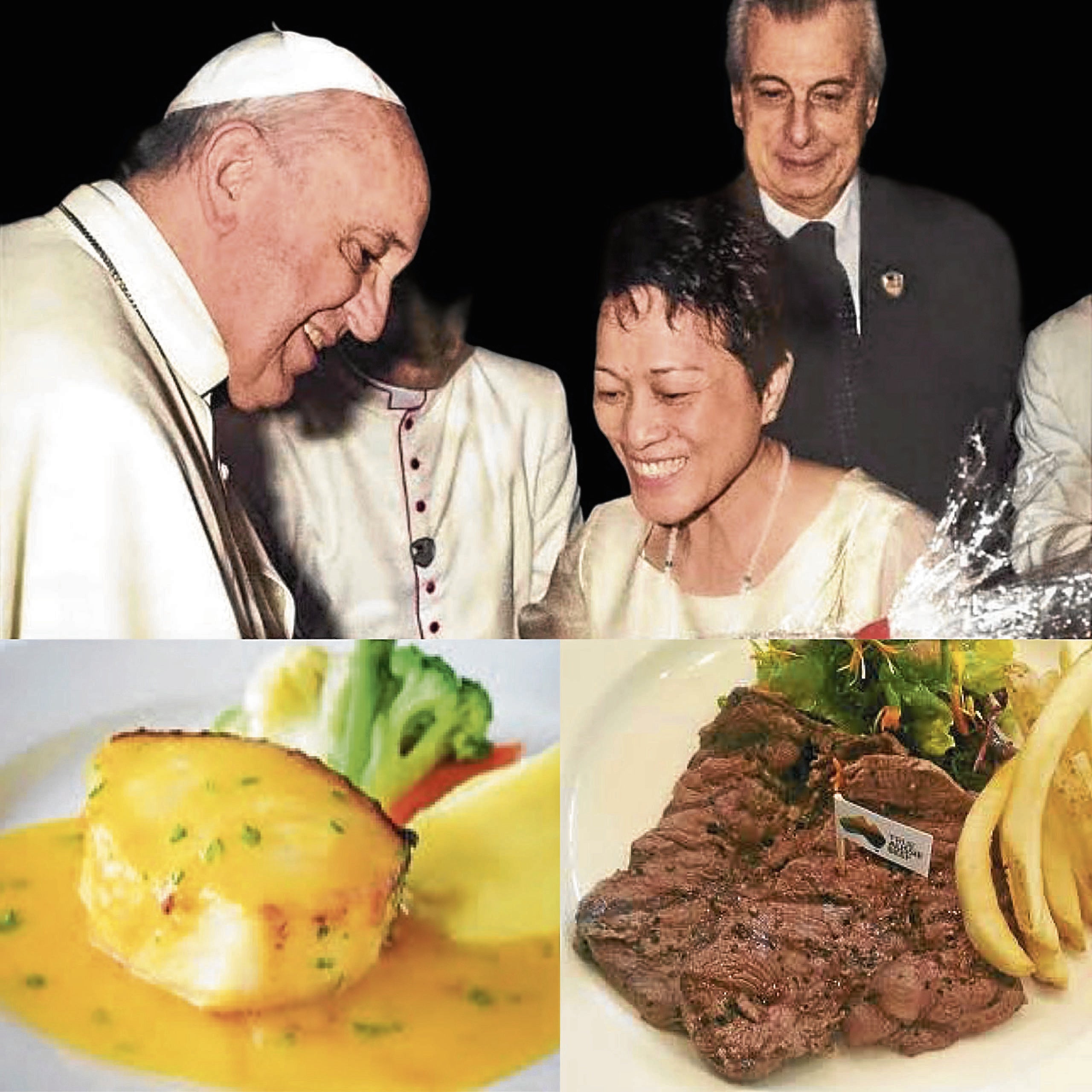 Chef Jessie Sincioco (right) personally prepared Pope Francis’ (left) food during his stay at the Nunciature in Manila in 2015. Asked to comment on the food, Pope Francis, who was in the Philippines at that time for a pastoral visit, said it was “delizioso!” —CONTRIBUTED PHOTOS

Today is a most blessed day as Pope Francis himself will celebrate holy Mass for the 500 years of Christianity in the Philippines.

I still remember when Cardinal Jorge Bergoglio was elected Pope Francis eight years ago on March 13, 2013. The fumata bianca (white smoke) only came out past midnight after papers had gone to print, but our committed editor in chief back then, Letty Jimenez- Magsanoc, had a “stop the presses” order that paid off: only the Inquirer carried the correct headline the following day that a new Pope—who went by the name Francis—had been elected.

This year marks the 500th year since the arrival of Ferdinand Magellan in the Philippines and Catholics are highlighting the arrival of faith in the country.

Magellan and crew celebrated the first mass on Philippine shores as well as the first baptism, when he allegedly gave Reyna Juana with an image of the Sto. Niño (along with an ecce homo or ivory bust of Jesus and an image of the Blessed Virgin Mary), which was displayed on the altar of the Basílica Minore del Santo Niño de Cebú for a long time.

The Mass to be celebrated by Pope Francis for Filipinos will be at 5 p.m., Manila time (10 a.m. Rome) today and will be aired on TV Maria. It will also be carried by Catholic Facebook pages such as Dominus Est (Facebook.com/DominusEstPH), which will have a pre-event show with the organizers live from St. Peter’s Basilica at 4 p.m., Manila time (9 a.m. in Rome).

Those who cannot be accommodated inside St. Peter’s Basilica can watch from St. Peter’s Square where Pope Francis will also greet Filipinos during his 12 noon Angelus (7 p.m., Manila time).

In an interview with Fr. Ricky Gente, the organizer who is also chaplain of the Sentro Pilipino and Santa Pudenziana Basilica in Rome, and Sally Manila, who is part of the worship commission of the Pastoral Council of Sentro Pilipino Rome, I teased them if they would also be selling bibingka and puto bumbong at St. Peter’s Square as we would if we had a grand fiesta here in the Philippines. Of course, there won’t be any, I just wanted to note and emphasize that eating is very much a part of the Filipino Catholic fiesta.

Fr. Ricky, who was the one who personally spoke to Pope Francis and requested for this Mass, said it was easy to invite the Pope as he truly loves the Filipino people and has fond memories of his visit here.

This reminded me, of course, of the incredible honor given to chef Jessie Sincioco to be the personal chef of the Pope during his stay at the Nunciature on Taft Avenue from Jan. 15 to 19 in 2015.

She recalled vividly that he loved her roast beef. As he left the Nunciature on the Sunday that he was to celebrate mass at the Luneta Grandstand where an estimated 7 million Filipino faithful gathered, she had a chance to greet him. When Cardinal Luis Antonio Tagle introduced her to the Pope, she asked him about her food. He replied, “Delizioso!” And he made special mention of the roast beef, saying it was very tender, “Like cow – moo!”

The Pope had requested for the doneness of his steak to be rare. He said he wanted his steak “alive.”

He also enjoyed the chef’s sea bass, pan fried perch and chicken chimichurri, an ode to his Argentinian roots. Of course, for more familiar flavors, he was also served pasta: lasagna and cannelloni.

Sincioco observed the Pope had a very good appetite and would always finish everything that was served to him, except for the vegetables. Thankfully, his diet had no restrictions.

Pope Francis also had the pleasure of enjoying Philippine mangoes when Sincioco personally brought mangoes when she had the occasion to visit him at the Papal residence the following year. The mangoes that she gave were from Zambales.

Meanwhile, Cardinal Tagle, who will be concelebrating the Mass with the Pope, has found a backup career as a cooking show host. With the priests of the Pontificio Collegio Filippino by his side, he cooks up a storm that is then streamed live on Facebook every Sunday at noon, Rome time (7 p.m., Manila). What he cooks is what everyone at the Collegio eats for lunch. He is really, to them, like that father or uncle who cooks the best family lunches on Sundays.

He also takes the opportunity to evangelize in a very relatable, conversational way, dropping in bits of wisdom as he stirs what he is cooking, explaining to viewers both food and faith.

He cooks mostly Filipino food. He cooked Bistek Tagalog, which he used to fill a burrito, as recommended by his brother Manny Tagle, a Washington-based restaurateur. Another time he made tamales. Come Lent, he cooked fish fillet and tofu with tausi.

When the show began last year, he was advocating not just Filipino but Caviteño cooking with specialties like pancit pusit, adobong Imus and Mutya ng Cavite, a rich and creamy thick soup similar to chowder prepared with seafood like fish, mussels, prawns and crabs. You can watch him via the Facebook page of Pontificio Collegio Filippino.

A Filipino fiesta favorite is lechon. It is interesting to note that this was actually what Magellan and crew ate when they arrived in the Philippines, although probably not with the technique that we use today.

Antonio Pigafetta, who chronicled Magellan’s expedition, noted that a day after landing in the Philippines on March 16, 1521, Magellan let his men eat a sow in Homonhon Island. Pigafetta also recorded that Magellan and crew feasted on pork after the first Easter Sunday Mass on March 31, 1521. The natives offered to Magellan’s company two swines for their meal.

On March 18, 1521, natives offered what Pigafetta called “figue” or fig, but which might have been bananas.

They also drank tuba. Pigafetta noted that during one of the first few meetings between Magellan and Rajah Humabon, they were given “four jars full of palm wine … covered with sweet-smelling herbs and arranged with four small reeds in each jar by means of which he drank.”

So this year we celebrate 500 years of food and faith. The Spaniards gifted us with faith and we welcomed them with our food.

I am just in awe of the fact that while 500 years ago an explorer set out to circumnavigate the globe, ultimately his mission transformed from circumnavigation to evangelization. And while Magellan did not make it back to Spain, today the Sto. Niño will be making his way to the Pope himself at the Papal Basilica of St. Peter.

The gift that Magellan gave to Hara Humamay, spouse of Rajah Humabon, as she was baptized and given the baptismal name of Juana 500 years ago, will today be offered to the Pope at the Altar of St. Peter.

And while 500 years ago, Rajah Humabon of Cebu was baptized, today one of our own, a humble native of Imus, Cavite, Luis Antonio Tagle, will be concelebrating mass with the Pope himself.

It has been a complete circumnavigation of faith.

St. Paul, who wrote in his letter to the Romans around 56 AD that he would go on a missionary journey to Spain, would be proud.

Truly, as the chosen theme of the Catholic Bishops’ Conference of the Philippines for the 500 years of celebration goes, we are “Gifted to Give.” We were gifted with faith, we now give this gift to the world.