Varquez shows there is money to be made from virgin coconut oil
By: Cyrain G. Cabueñas - @inquirerdotnet
Philippine Daily Inquirer / 04:30 AM January 31, 2021 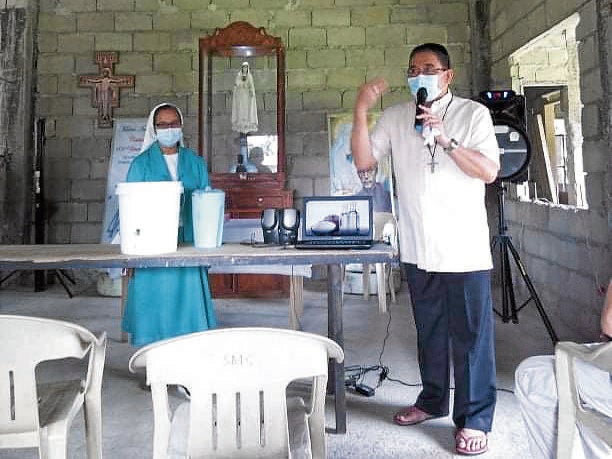 As a priest for 18 years in his native Bohol and bishop for 14 years here, he has been using it for the sacraments of baptism, confirmation, extreme unction, ordination to the priesthood and mass of the Chrism.

These days though he has been advocating and promoting another kind of oil, not the sacramental one, but virgin coconut oil (VCO).

Seeing how the livelihood of people in his diocese has been adversely affected by the COVID-19 pandemic and stringent quarantine measures, he realized that the Church should do something more than offer prayers and moral support.

And for him, that means helping the people of Eastern Samar cope with falling incomes and rising expenses by producing VCO.

Varquez grew up in a farming community in his hometown in Bohol and he took some agricultural subjects, thus he knows well that the vast and yet long neglected coconut resource in Eastern Samar holds great income potential.

So when the Department of Science and Technology came up with a study last year that VCO has a compound that can destroy the fatty covering of coronavirus, Varquez believed that coconut oil may enjoy a resurgence in demand and should give the coconut farmers and families here an alternative to the traditional production of copra, which has fewer takers these days.

To turn his idea into reality, Varquez requested former Philippine Coconut Authority Chair Dorotea Pajanustan, who has been encouraging Filipinos to use and even produce VCO since 2012, to give a two-day seminar on VCO production at the diocesan social action center last November.

Since then, Varquez and his team composed of some nuns and diocesan workers have echoed and transferred VCO technology four times in different parishes, albeit to a limited audience due to health protocols. He took every opportunity to spread his newfound gospel of development to his flock.

“What the mind can conceive, the body can achieve. We should not underestimate ourselves,” Varquez reminded churchgoers in one of his homilies at the Borongan Cathedral.

“In times of crisis, people should think positive, have alternative means to be productive. If you have the interest, passion and willingness to sacrifice, you will reach your goal,” Varquez said.

Though VCO is still classified as a food supplement and not medicine, Varquez believes it can help people defray expenses and secure some savings because of its promised health benefits and added protection against contracting COVID-19.

Sister Editha Tayko is one of the three nuns from the Living the Gospel Community (LGC) who have attended the VCO workshop and today, she and her fellow LGC sisters, with the help of some priests and seminarians, produce VCO from scratch—from the selection of mature coconuts, to the grating and pressing of coconut flesh, fermentation, filtration and finally to bottling and packing of the finished VCO products branded Wise Virgins after the biblical passage about the wise virgins who filled their lamps with oil while waiting for their master.

“While our goal is not [to go] commercial but to help those who want an alternative source of income, we have earned P3,000 out of the same amount that we spent for VCO production. Out of 100 coconuts, we were able to produce 20 350 ml (milliliter) bottles of oil in just three weeks,” Tayko said.

Hoping for their revenue to pick up in the coming months are 13 elderly women who are members of Kinabuhi tikang ha Kamatayon-Gios Anoronhon Women’s Association (KIKA-GAWA) in Brgy. Anuron, of Mercedes town. They used to earn from their banana flour, but COVID-19 has forced them to stop production.

“Bishop Varquez’ team who introduced us to VCO is really heaven-sent and a lifesaver for us and our families,” Felicia Capagalan, 69, said. As a mother of eight taking care of 10 grandchildren and an ailing husband, Capagalan believes that a small earning from VCO will tide them over.

KIKA-GAWA president Remedios Quirante said that there are already 15 families waiting for VCO products in her village alone.

“We are very thankful that Bishop Varquez chose our group as beneficiary of VCO technology. We are equally grateful to our Congresswoman Maria Fe Abunda who donated a modest amount for our processing facility and raw materials. We hope to recoup our lost profit once we are settled,” said the 54-year old retired police officer.

Due to lockdowns, the VCO team of the diocese could not visit other parishes as scheduled. But other groups are thankfully ramping up production to meet a booming demand even from some priests.

“Even my father who is 75 years old says that it somehow rejuvenates him,” Gadicho said.

“These Wise Virgins VCO products of the diocese are less expensive, presentable and are for a good cause. I will definitely ask my parishioners to patronize them. More importantly, I will remind them to always be wise and carry with them an oil of gladness in their hearts,” Abucejo said.