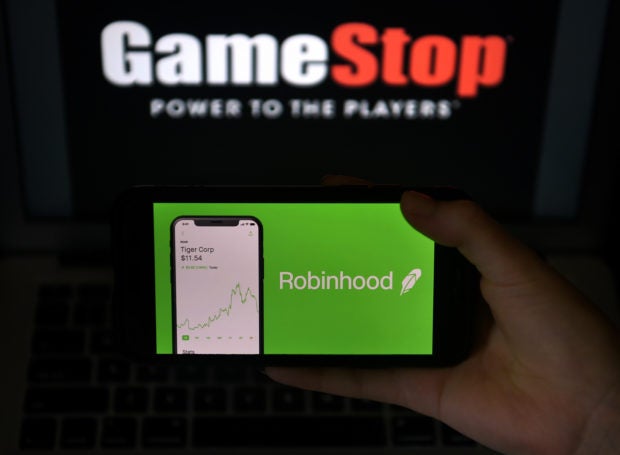 This photo illustration shows the logos of video grame retail store GameStop and trading application Robinhood in a computer and on a mobile phone in Arlington, Virginia on January 28, 2021. – An epic battle is unfolding on Wall Street, with a cast of characters clashing over the fate of GameStop, a struggling chain of video game retail stores. The conflict has sent GameStop on a stomach-churning ride with amateur investors taking on the financial establishment in the mindset of the Occupy Wall Street movement launched a decade ago. (Photo by Olivier DOULIERY / AFP)

NEW YORK – Global stocks finished an ugly week with another volatile session Friday as the buying frenzy over GameStop and some other equities resumed amid stepped-up scrutiny from regulators.

Major US indices fell about two percent following similar drops in Europe and Asia, while investors shrugged off some positive developments on coronavirus vaccines.

Analysts said there were factors besides the drama around GameStop influencing the pullback on Friday and earlier in the week.

These include concerns over lofty equity valuations given the economic weakness caused by Covid-19. Investors are also worried US fiscal stimulus may lag market expectations after President Joe Biden’s $1.9 trillion package garnered a skeptical reception in Congress.

But much of the focus landed on questions over GameStop, which soared nearly 70 percent after Robinhood and other trading platforms lifted restrictions on trading the equities.

Shares of GameStop, AMC Entertainment and others have been on a tear much of the week as investors organized over Reddit targeted the equities on Robinhood and other platforms to combat hedge fund short-sellers who were betting on lower prices.

“This is all a de-risking event by hedge funds, because of the loss that they have taken from the stocks like GameStop,” said Karl Haeling of LBBW.

“These hedge funds are facing billions of dollars of losses and they had to go and sell stocks where they had profits and long positions. They have to sell them off to cover their losses.”

“Fear is running through the equity markets again as some trading apps have relaxed restrictions on certain stocks that have experienced colossal volatility recently, like Gamestop,” said David Madden at CMC Markets UK.

Regulators have taken notice of the activity, with Texas Attorney General Ken Paxton announcing a probe into Robinhood and 12 other online brokerage services.

Earlier, the US Securities and Exchange Commission said it was “closely monitoring and evaluating the extreme price volatility of certain stocks,” while British market watchdog the Financial Conduct Authority issued a warning to investors about market volatility.

Friday’s bumpy session came as Johnson & Johnson said its Covid-19 vaccine has an overall efficacy of 66 percent, with 85 percent effectiveness in preventing severe Covid-19 across all geographical regions, but only 57 percent success rate in combatting a variant discovered in South Africa.

The J&J vaccine has been eagerly anticipated because it requires only one shot, in contrast to other options now on the market. The J&J vaccine also does not need to be maintained at exceptionally cold temperatures.

“The fact we have a single-dose vaccine that’s 66 percent effective, and highly effective against severe disease is still a success,” said Amesh Adalja, a senior scholar at the Johns Hopkins Center for Health Security, adding it would increase US vaccination capacity.