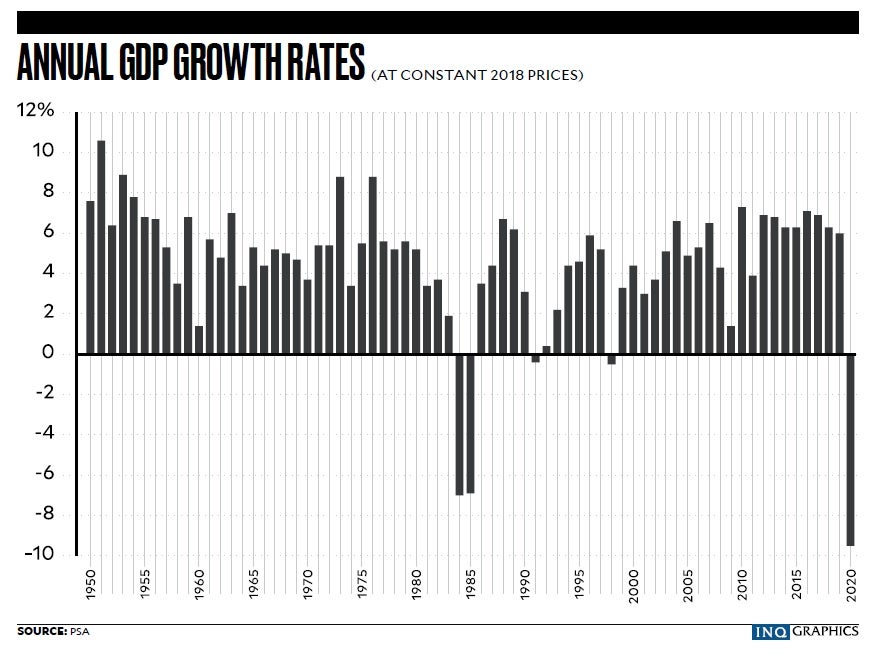 MANILA, Philippines — The Philippine economy fell to its worst post-World War II recession in 2020 amid the COVID-19 pandemic, aggravated by the onslaught of natural disasters from the eruption of Taal Volcano to a string of devastating typhoons.

Mapa told the Inquirer that the value of goods and services produced in the Philippines in 2020 amounted to P17.98 trillion at current prices.

In 2019, before the pandemic, the country churned out P19.52 trillion — sustaining annual economic growth for 21 straight years since the GDP declined by 0.5 percent in 1998 due to the Asian financial crisis.

The previous worst recession was in 1984, when the economy, saddled with debt, shrank by 7 percent during the waning years of the Marcos dictatorship.

But the pandemic’s larger damage had been inflicted on the Philippines’ gross national income (GNI)—the total output by Filipinos here and abroad. Mapa said GNI slid by a faster 11.1 percent last year. He told the Inquirer that the reduction in deployment of overseas Filipino workers (OFWs) when global borders were closed or restricted to contain the coronavirus led to a decline in their total compensation income.

When divided across the Philippines’ estimated population of 109.1 million as of end-2020, Mapa said the share per capita, or for every Filipino, of GDP declined 10.7 percent, while per capita GNI dropped by a bigger 12.3 percent, reversing steady growth in recent years.

The Philippines had targeted moving up to upper middle-income country status next year, but the reduction in GNI may make that more difficult to achieve.

As the Philippines’ growth slowed in 2019 due to the delayed national budget approval, it remained a lower middle-income country with a GNI per capita of $3,850—and given the double-digit decline in per capita GNI last year, the ascent to upper-middle income status was pushed back.

Despite these setbacks, acting Socioeconomic Planning Secretary Karl Kendrick Chua on Thursday claimed the Philippines was on track to move up to upper-middle income status in 2022, to join China, Indonesia, Malaysia and Thailand.

Chua, who heads the state planning agency National Economic and Development Authority (Neda), also said the poverty-reduction target may be achieved “earlier than 2022, despite the pandemic.”

The Duterte administration was aiming at reducing the poverty rate to 14 percent next year and was making prepandemic inroads, with nationwide poverty incidence falling to 16.7 percent in 2018 from 23.3 percent in 2015.

Chua’s push to gradually reopen the economy while adhering to minimum health standards had allowed the recovery of some lost ground with the fourth-quarter GDP contraction narrowing to 8.3 percent year-on-year from 11.4 percent in the third quarter.

On a quarter-on-quarter basis, GDP grew by 5.6 percent in the fourth quarter of 2020 from the third-quarter output, while GNI increased by 2.9 percent.

These quarter-on-quarter improvements, however, were slower than the 8-percent GDP growth and 6.3-percent GNI expansion during the third quarter from the trough in the second quarter—at the height of the longest and most stringent COVID-19 lockdown in the region.

Presidential spokesperson Harry Roque said the 5.6-percent growth in the last quarter of 2020 showed that the economy was recovering. “The good news is even if we are still in negative, our economy improved,” he said at a press briefing. “We can see that the reopening has not been enough for us to return to normal and stop hunger in the Philippines.”

He called on Filipinos to continue following health protocols so that the government could allow more businesses to reopen.

“If the economy is not opened, many would go hungry and die, if not from COVID then from hunger,” Roque said.

With consumers encouraged to spend more and businesses urged to resume operation, the industry sector grew 11.6-percent quarter-on-quarter during the October-December period, while services expanded by 4.5 percent.

Only the agriculture sector contracted by 4.1 percent in the fourth quarter compared to the preceding quarter as typhoons damaged farm output.

But for the entire year, output decreased across all three major economic sectors—industry shrank by 13.1 percent, services by 9.1 percent and agriculture by 0.2 percent.

According to the World Bank, the rich were able to “use their savings and borrowed from banks” to cope with the harder times, while poor Filipinos had to scrimp on spending on food and had to borrow money from friends.

Cash grants and relief goods from the government helped up to 90 percent of the poorest and most vulnerable households that supposedly benefited from the doleouts.

But the pandemic’s wider impact on the global economy trickled down to 60 percent of recipients of foreign remittances who got none or less than pre-COVID-19 inflows in 2020, the World Bank said.

In the case of businesses, a World Bank survey in July last year showed their sales fell by 60 percent or more; companies engaged in construction, education and food had to lay off about half of their workforce; and three out of 20 companies had to shut down for good.

Businesses had to seek support from the government to pay their workers as well as to access low-interest loans, as almost half of them had no idea when they could resume operation, according to the World Bank.

Gerard Seno, national executive vice president of the Associated Labor Unions (ALU), wrote to President Duterte earlier this week to ask for a price freeze and to go after hoarders and price manipulators.

The group also asked Duterte to provide a wage subsidy to workers.

“We have been asking the government to put more money in the pockets of workers by providing cash subsidy to help lowly-paid workers buy nutritious food and keep the economy on its feet,” said ALU spokesperson Alan Tanjusay.

He said the 9.5-percent economic decline threatened to create more unemployment and income losses for the workers and would push more businesses to resort to cost-cutting measures to cope with weak consumer demand and falling profits.

“If not correctly addressed in time, this serious decline of the economy will lead to more poverty and wider inequality,” Tanjusay said. —WITH REPORTS FROM LEILA B. SALAVERRIA AND DONA Z. PAZZIBUGAN

PCG gives insight on ‘challenge’ that made Chinese ships flee