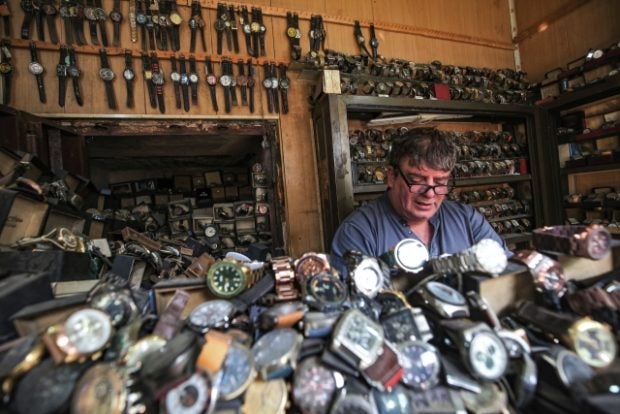 Youssef Abdelkarim’s storefront on one of Baghdad’s most historic streets is a time capsule — literally. Thousands of wristwatches fill the tiny shop, where three generations have repaired Iraq’s oldest timepieces.

The dusty display window on Rasheed Street features a single row of classic watches in their felt boxes right at the front, with a mountain of haphazardly piled pieces behind it and others hanging from hooks overhead.

Inside, there are watches in plastic buckets on the floor, packed in cardboard boxes on shelves and stuffed into suitcases.

In a far corner, behind an old wooden desk, 52-year-old Abdelkarim is hunched over an antique piece.

“Every watch has its own personality. I try to preserve it as much as I can, as if it were my own child,” he told AFP, squinting through black, thick-framed glasses.

Abdelkarim began fixing watches at the age of 11, after the death of his paternal grandfather, who opened the store in the 1940s.

His grandfather had already passed the trade onto his own son, who began to teach Youssef.

He has repaired expensive Swiss models, including €10,000 Patek Philippes and what Abdelkarim calls “the poor man’s watch” — a Sigma. And he suspects he even fixed a piece that belonged to Iraq’s feared dictator Saddam Hussein.

“It was a rare watch brought to me by the presidential palace, with Saddam’s signature on the back,” he recalled.

Indeed, much has changed since then.

People swapped their analog wristwatches for digital models, then dropped them altogether for smart phones.

But Abdelkarim insists an original timepiece isn’t a thing of the past, telling AFP with a wink: “A man’s elegance begins with his watch. And his shoes.”

That may be right: his shop is still packed with customers of all ages and styles, including former ministers in sleek suits, collectors looking for vintage classics and younger Iraqis bringing newer pieces for him to fix.

“Everyone finds what they need here,” he said proudly.

With his eyesight starting to falter, he fixes just five pieces a day now, compared to the 1980s when he sold and fixed hundreds every day.

At the time, Rasheed Street was bustling with business during the day and the top place to be seen at night.

His shop was competing with dozens of other repair stores then, but they started to shutter in the 1990s, when crippling international sanctions left many households struggling to feed themselves.

Then, the U.S.-led invasion of 2003 toppled Saddam and opened a pandora’s box of sectarian violence, including car bombs on Rasheed Street.

Abdelkarim moved to live in a safer neighborhood, but still walked to the family store to keep it open.

Even last year, when Rasheed Street was shut for months by a huge protest camp in nearby Tahrir Square, he managed to keep working.

“I’d open once or twice a week, because the riot police often clashed with protesters here, but I still came,” he told AFP.

All around him, the vintage clothing stores or bookshops have closed, transformed into warehouses or stores selling car accessories.

“The street’s features were erased and most of my friends moved. But there’s just something different that sets it apart from every other place in Baghdad,” he said.

He is teaching his sons, Yehya, 24, and Mustafa, 16, to take over the family business.

But he insists they will preserve the store as it is, with its cracked walls framing the door, its dusty shelves and its mountains of timepieces.

“This shop hasn’t changed in 50 years, which is what keeps people coming back,” he said.

“That’s what preserves its identity.” CC