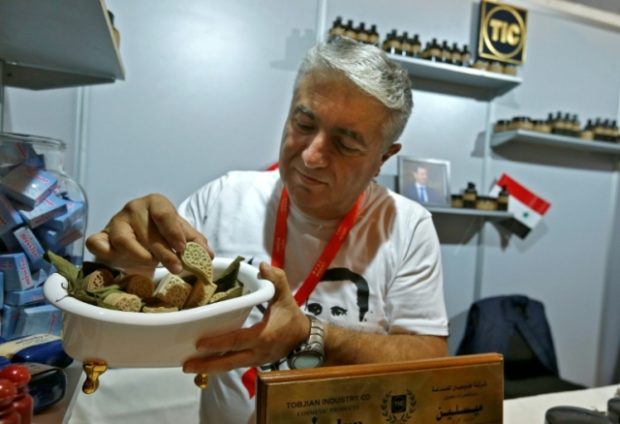 Under the elegant arches and domes of an Ottoman-era compound, Joseph Tobjian displays his aromatic Aleppo soap at a trade fair designed to revive Syria’s exports-starved arts and crafts.

The soap maker is among more than 130 merchants taking part in the state-sponsored fair in Damascus for small businesses from Aleppo, northern Syria.

“I’ve spent my entire life around laurel oil and soap. Their scent does not leave my lungs,” Tobjian told AFP.

“We’re in Damascus looking for an alternative to foreign markets, after exports stopped,” he added, soap bottles and natural cosmetics lining the table in front of him.

The 61-year-old said he was surprised by the high number of visitors at the fair, including Damascus traders interested in his beauty products.

Aleppo, Syria’s pre-war economic hub, is famed for its ancient crafts, hit hard by the conflict that broke out in 2011.

Goods ranging from traditional soaps, furniture and garments to made-in-Syria marshmallows are on show in the capital’s Tekkiye al-Sulaymaniyah complex.

The Tobjian family fled to Canada from Aleppo in 2012, leaving behind a soap workshop that employed about 40 workers in its heyday.

Unhappy with life in exile, the Syrian Armenian family returned in 2018 to find both their workshop and city in ruins.

They relocated to a modest workshop and employed two workers to resume production of Aleppo soap, once a top export also popular among tourists.

“We inherited this craft from our fathers and grandfathers,” said Tobjian, wearing a T-shirt bearing the image of Syrian President Bashar al-Assad. “We must do everything we can to revive our workshops and factories.”

A touch of Aleppo

Aleppo’s centuries-old covered bazaar, situated in its Old City, a UNESCO World Heritage Site, once teemed with thousands of stalls.

The Old City saw some of the heaviest battles of Syria’s war, before Russian-backed regime forces recaptured rebel-held districts of Aleppo in December 2016.

A gradual government-led restoration program has revived parts of Aleppo’s bazaar, but the scars of war remain.

In Aleppo’s industrial zone, the largest in Syria, most factories and workshops were also ravaged by fighting.

With state support, some 70 small workshops have reopened but business is slow amid an economic crisis compounded by Western sanctions and the collapse of the Syrian pound against the dollar.

“The war destroyed the infrastructure of industries in Aleppo,” said Alaa Hilal, director of the week-long Damascus fair.

Western sanctions, which hinder fuel imports, have also made it tough for factories to operate.

This is why Aleppo craftsmen are looking “for opportunities to make sales, sign contracts and market their products in Damascus,” Hilal said.

Western sanctions have pushed Syrian businesses to find alternatives. At the fair, Sonali Ghazal shows off marshmallows scented with rose water or pistachios from Aleppo.

“We managed to make marshmallow in Syria and we gave them an Aleppo touch,” the 42-year-old teacher said.

Sonali said she used to buy them for her students before marshmallows vanished from the market because of the war and sanctions.

She came up with a homegrown alternative, saying, “But this time, with the flavor of Aleppo pistachios.” CC