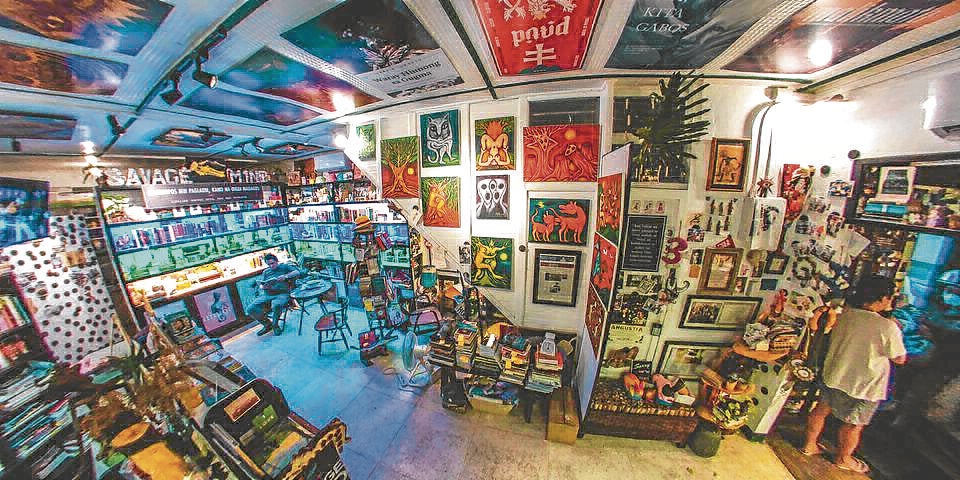 One of the first establishments to reopen after strict lockdown, the indie bookseller helped quarantined citizens of Naga city buy their groceries through a mobile-app based community.

The latest tally shows that the new coronavirus has caused the death of about 1.46 million people worldwide, including at least 8,300 in the Philippines. But the casualty count can also be reckoned in terms of business entities.

According to a survey done by the World Bank in partnership with the Department of Finance and the National Economic and Development Authority, two in every five firms had to suspend operations temporarily and one in every five firms did so permanently.

Conducted in the second week of July, the study covered 74,031 companies and assessed the impact of the lockdown in March to May on their operations.

Even when community quarantine restrictions were eased in June, respondents reported an average revenue decrease of 64 percent as nine in every 10 firms experienced lower sales from April and July.

This suggested that firms fared worse at the height of lockdown in the previous weeks, when there was an average of 65-percent drop in revenues with 75 percent of respondents saw shrinking sales.

Results show that companies had expressed a high degree of uncertainty and general pessimism about their operations, sales and employees for the succeeding three months.

“Such lack of confidence will likely limit additional investment and employment, restraining firms’ growth,” the report said. “These suggest that business activities are expected to stay subdued for an extended period.”

Among all respondents, of which a combined 78 percent are micro and small enterpri­ses, about two-thirds turned to digital solutions for sales, marketing and payment methods to adapt to the new normal.

Close to a quarter of surveyed firms invested in digital solutions while two-fifths repackaged their product mix.

We have heard of those that reconfigured their business to change with the times—such as distilleries shifting to production of rubbing alcohol, or hotels converting to quarantine stations—but the survey’s latter observation is on point for many microentrepreneurs like Marinel Domingo Clarus.

A private school teacher, Clarus before the pandemic has been augmenting her family’s income by reselling plants, organic soaps and organic facial cleansers. Selling was done with the traditional personal touch, via face-to-face transactions, as customers were mostly workmates.

“I was also offering souvenir plants, the kind the are given away during events such as weddings, dedications (called christening among Roman Catholics) and the like,” she said. “Sometimes, I go on-site to set up the venue with the gifts, which are the plants I sell.”

When the pandemic came, demand for organic soaps and events souvenirs vanished. Clarus decided to focus on houseplants just as the plants craze picked up. She takes pictures of the plants, which she posts on her Facebook page Prickles and Blooms.

While houseplants have become her main offering, Clarus has also expanded into “live selling” as she joined buy-and-sell communities, such as those that are dealing with kids’ clothes. Her husband makes the delive­ries using the family motorcycle, unless the clients preferred to book with service providers like Lalamove and Grab.

“In a way, I benefited from this situation,” Clarus said. “Because of the shift to the work-from-home scheme, I have more time to spend on the business and it just so happened that while I lost a big part my market, the pandemic helped me turn to a more promising segment—and it was just a matter of [overhauling my catalogue of products].”

For independent book publisher Everything’s Fine, cofounder and copublisher Oliver Ortega said they had to take on roles beyond the production of tomes.

Speaking at the Book Development Associations of the Philippines’ (BDAP) Literary Festival held online over the weekend, Ortega said they had early on set their sights on selling their titles online through their own website, as well as through other digital channels. This was especially so since Everything’s Fine found consignment fees of big-name bookstore chains prohibitive.

“We focused on our niche since our titles are not really young adult works [that would sell like hotcakes],” Ortega said, noting that two of their titles resonate most with film buffs.

Their maiden offering was Ishmael Bernal’s memoirs (“Pro Bernal Anti Bio” with the late filmmaker sharing credits with Jorge Arago and Angela Stuart-Santiago). This was followed by a volume on film criticism (“Break It To Me Gently: Essays on Filipino Film” by Richard Bolisay).

“We made it a point to be everywhere where readers of our books might be, such as film screening venues, film festivals, book tours and community bookshops,” Ortega said. “And then BDAP invited us to join the Aklatan Book Fair of (e-commerce platform) Lazada, through which our books are also now available.”

Further, Everything’s Fine makes it a point to be active in existing kindred communities or help initiate the formation of new ones, such as the Indie Publishers Collab PH.

Among these allies are independent booksellers like Mt. Cloud Bookshop in Baguio City, which is itself undergoing transformation to adjust to the disruptions caused by the pandemic.

Padmapani Perez, herself an author and one of two sisters behind Mt. Cloud, said in the same forum that similarly situated booksellers were reinventing themselves while keeping to their roots.

Perez said the plague turned 2020 into a yearlong downtime for Mt. Cloud. In previous years, business slows down only during the rainy months when locals don’t go out much and tourists are few.

One of the first things Mt. Cloud did was to set up subscription packages, with subscribers being provided with a reading list based on the topics of interest that they declare. They also tried “blind book dates” for Valentine’s, with the mantra that books are better gifts than flowers and chocolates because they last longer.

Mt. Cloud also tried virtual book browsing through videos posted on social media, simulating for viewers the experience of pulling out books from the shelves and looking inside the pages.

And like Everything’s Fine, it was good practice to stay in touch and know personally the publishers, authors and fellow booksellers.

She said Savage Mind also partnered with a mobile app-based e-commerce platform, Community Mart, which enables users to do their grocery shopping through local stores.

Savage Mind was one of the first stores to reopen in Naga city and this was made possible because Kristian Cordero—one of the owners—pushed for books to be considered as essential goods.

“We realized that we should have done that also earlier in the pandemic, [but now we have become part of a similarly driven] community of businesses here in Baguio,” Perez said.

She said Mt. Cloud’s neighbor, Behind Bars Bike Shop, was one of the first stores to reopen because bikes were considered essential during lockdown, so they got to do as what was done in Naga.

“The example of Savage Mind is very good,” Perez said. “While making sure to keep the business running and the books moving off the shelves, they are also extending their community beyond the immediate customers, the book readers.”

Mt. Cloud is also keeping tabs on Kwago Book Bar in Makati City, which was also stymied by lockdown.

Perez said that from selling books, Kwago decided to become a nonstock nonprofit organization dedicated to research and development combined with printing activities.

“They are bravely exploring technology as a way to get ideas in print and made available to different communities at affordable prices,” she said. “Kwago is also developing a Raspberry Pi [model], a small computer that is intended to be a learning module for a community in the Visayas.” INQ