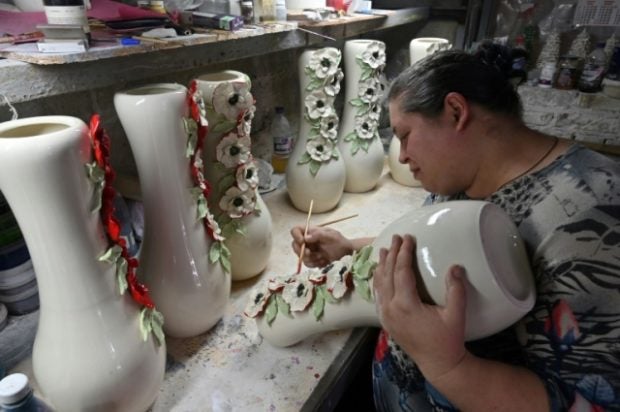 Impoverished and conflict-ridden Slovyansk in eastern Ukraine already was a tough market for Maryna Novikova’s ceramics workshop to thrive in. Then the COVID-19 pandemic hit.

A months-long lockdown in the spring pushed her small business to the brink of collapse — just as it was finally getting off the ground — forcing her to cut staff and slash salaries as sales plummeted.

“It was difficult both morally and in practical terms,” the 59-year-old said, standing in a room heated by a pottery kiln.

Now, ex-Soviet Ukraine, one of Europe’s poorest countries with an aging public health system, is suffering a surge in infections that small-business owners such as Novikova fear will bring about new restrictions and serve a final blow to their livelihoods.

If a new quarantine is imposed, Novikova says she will “close everything and not continue,” noting that she is already offering massage services after work to make ends meet.

With a shortage of hospital beds and medical staff, Ukraine’s health minister Maksym Stepanov warned this week that the country had “passed the point of no return.”

Health officials have already registered more than 440,000 cases and 8,000 fatalities in the country of 40 million, but Stepanov warned that “the worst was yet to come.”

Despite seeing record new COVID-19 infections on a nearly daily basis, Ukraine has yet to join European countries like France and Germany and follow through on promises to introduce a new lockdown.

That has offered some relief to 59-year-old Novikova, who was only able to start her business in 2018 with the help of the United Nations Development Programme (UNDP) grant money.

Her company in a two-storey building in the outskirts of Slovyansk, now with only five staff, produces decorative handmade vases and figurines that go on sale locally as well as in Italy and Romania.

After two years, she made her first profit of 2,000 hryvnias (around $70 or P3,400) in February, a meager monthly sum that was decimated as the lockdown set in.

These struggles are familiar to businesses throughout the country hit by the pandemic, which the UNDP said in September was “pushing the country towards its worst recession in decades – possibly a depression, with terrible consequences for the most vulnerable.”

Its report said that 84% of households have lost income, 43% have at least one family member who has been made redundant and more than 8% of small and medium-sized enterprises are on the brink of bankruptcy.

‘Not ready for second wave’

In an effort to soften the blow, Prime Minister Denys Shmyhal in September said the government was developing business support programs “to allow the resumption of economic growth.”

But the initiative has not reassured small business owners as the government eyes new restrictions.

Maryna Polovina worked as a culinary assistant in Poland and then as a pastry chef in western Ukraine before opening her own place in February, just before the lockdown, in Kramatorsk several kilometers from Slovyansk.

She and her husband were stunned when more than 200 visitors flooded their vegetarian restaurant, which was something of a novelty in the region, on opening day.

Struggling to meet high demand while maintaining their own high standards, 40-year-old Polovina admitted she was relieved when quarantine began.

But then their income fell by half, forcing her to cut wages for three cooks and two bartenders.

Polovina said a delivery system they introduced early in the lockdown helped the business stay afloat, but warned it would not stave off the financial shock of another quarantine.

“We are not ready for the second possible lockdown,” she told AFP. “Employees want raises, but we can’t pay because there aren’t enough clients.” CC