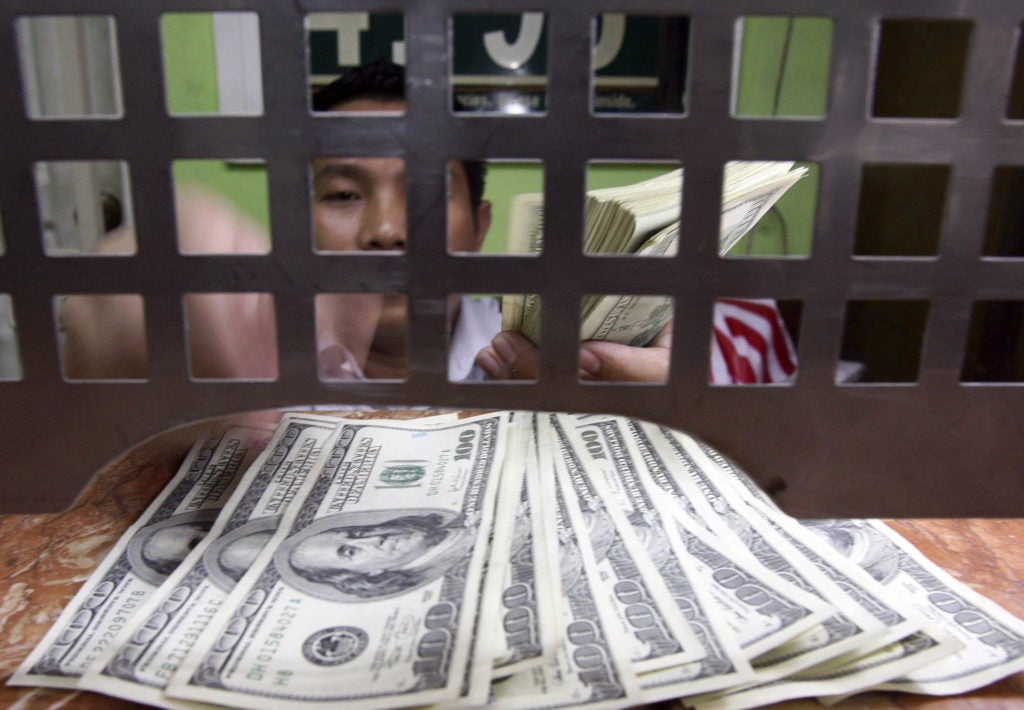 FILE – A man counts U.S. dollar bills at a money changer in Manila October 26, 2006. The Philippine central bank said on Thursday it was studying whether to allow banks to buy dollars above currently prescribed limits. The peso, quoted at 49.895 to the dollar around midday on Thursday, has gained 6.46 percent against the dollar so far this year. REUTERS/Romeo Ranoco (PHILIPPINES)

MANILA – Philippines – The dollar flow surplus of the Philippine economy — which has been building up every month since the start of the pandemic — surged significantly in September, as the inflow of foreign exchange from the government’s overseas borrowings added to the decline in the country’s import spending.

According to the Bangko Sentral ng Pilipinas, the country’s overall balance of payments position posted a surplus of $2.1 billion in September 2020, bringing the year-to-date surplus position to $6.88 billion.

The seven-month surplus is the highest level recorded so far, since the cumulative $7.8 billion in inflows posted at the end of 2019.

“The [balance of payments] surplus in September 2020 reflected mainly the inflows from the BSP’s foreign exchange operations and income from its investments abroad, and the national government’s foreign currency deposits with the BSP,” the central bank said.

These inflows were partly offset, however, by the national government’s payments of its foreign currency debt obligations.

The balance of payments is the net tally of all the country’s transactions with overseas parties, including the import and export of goods, payments for services, inflows or outflows of short and long term investments, and remittances, among others. A surplus means the economy is earning more dollars than it is spending, while a deficit represents the opposite, with their corresponding effects on the value of the country’s currency.

The central bank said the cumulative balance of payments surplus of $6.88 billion was higher than the $5.57 billion surplus recorded for the same period a year ago.

“Based on preliminary data, the current balance of payments surplus was supported mainly by higher net foreign borrowings by the national government and lower merchandise trade deficit along with sustained net inflows from foreign direct investments, personal remittances, and trade in services,” the agency explained.

At this level, the country’s dollar reserves represent a “more than adequate” external liquidity buffer, which can cushion the domestic economy against external shocks, the central bank said.

This is equivalent to ten months’ worth of imports of goods and payments of services and primary income, and is also about nine times the country’s short-term external debt based on original maturity and 5.4 times based on residual maturity.

Earlier this month, the central bank revised its balance of payments projections upward amid the expected recovery in the local and global economies next year, a smaller trade deficit, the resilience of overseas Filipino remittances and foreign direct investments, and the build up in dollar reserves.