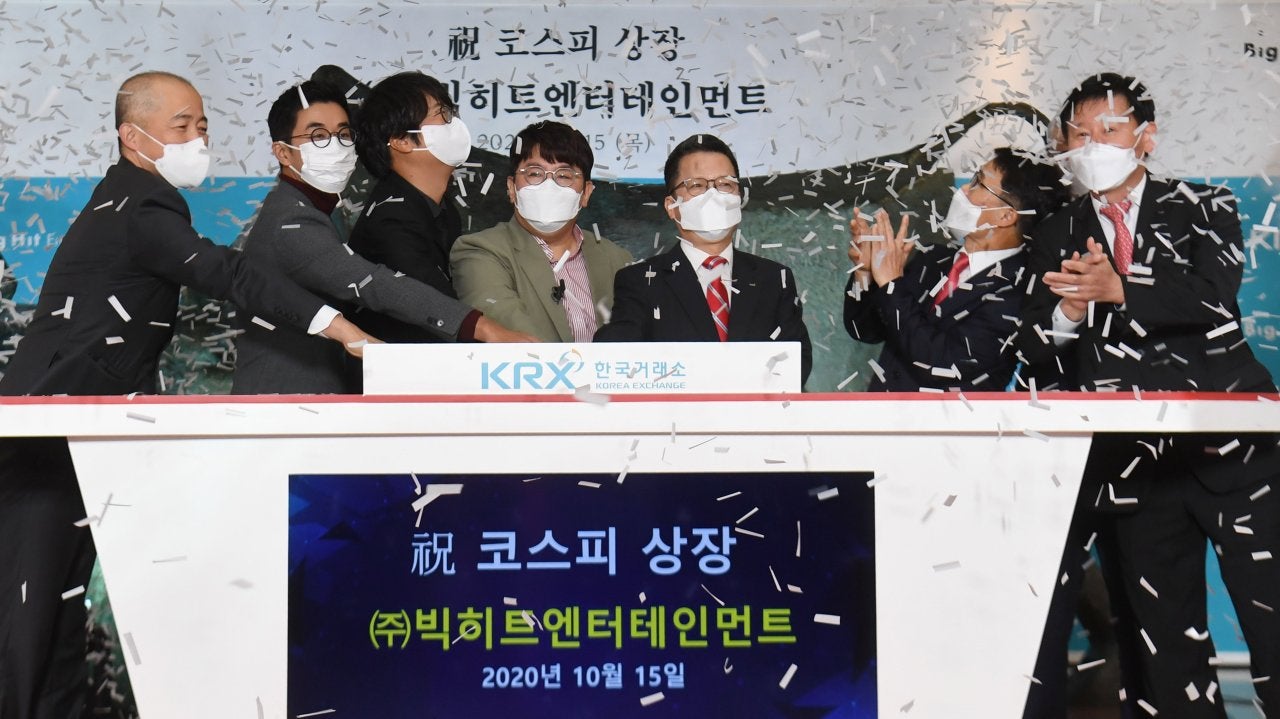 SEOUL — At 8:50 a.m. on Thursday, Chairman Bang Si-hyuk of Big Hit Entertainment, home to K-pop phenom BTS, rang the bells marking the company’s initial public offering at the Korea Exchange headquarters in Seoul. A huge step forward for the 15-year-old company, and also one of the most anticipated IPOs of the year, the listing ceremony was livestreamed — a first in the bourse operator’s history.

“We began as a small entertainment company that set out to bring healing through our music and artists. Today we’ve grown into a global company with over 1,000 employees, four music labels and seven subsidiaries,” Bang said. “As a listed firm, Big Hit feels a renewed sense of responsibility to our shareholders and our society.”

Founded in 2005 by former JYP Entertainment producer Bang, Big Hit has gone through its ups and downs to now stand tall as the nation’s largest entertainment agency.

The company started to see business grow in 2015 when BTS, after its debut in 2013, topped music charts in and out of the country with hits such as “Run” and “Mic Drop.” The band made a breakthrough the following year when it made its debut on the Billboard Hot 100 chart with the single “DNA” and nabbed its first Top Social Artist prize at the Billboard Music Awards. In the following years, they made their way into the top 10 of the Top 100 chart four times, finally topping the list with “Dynamite” this year.

An initial public offering is the process of sharing the ownership of a private company with the public. It is a huge step forward for a company as it is a means to ask the public to support its future and raise funds for further business expansion.

At the same time, a listed firm holds a heavier responsibility, as its business decisions and the results are directly linked to shareholders’ benefits. The firm also faces stricter government surveillance in terms of transparent management and fair trade.

Q. What is Kospi?

Q. How big was the stock debut?

On the first day of trading, the stock went through a roller-coaster ride.

Big Hit was undoubtedly one of the most heated IPOs of the year, with around 1.94 trillion won in shares traded on the first day, topping the daily transaction volume on both the Kospi and Kosdaq.

Bang is the largest shareholder with a 34.74 percent stake. Based on Monday’s closing price of 189,000 won, his stock wealth is valued at 2.34 trillion won – making him the 12th richest stock billionaire in the country.

Q. What about BTS?

Ahead of the listing, Bang had granted a total of 478,695 shares split equally among the band’s seven members. Receiving 68,385 shares each, the septet’s stock wealth is valued at 12.92 billion won per person, based on Monday’s price. While Bang topped the industry’s stock rich list, the BTS members are also believed to be ranked among the top 10.

Q. What about Big Hit employees?

About 1.42 million treasury shares were allotted to Big Hit employees. Considering there are 313 employees at Big Hit based on its July filing, the stock wealth per person is estimated at about 560 million won on average. Now more than 1,000 employees work at the company. The treasury shares cannot be sold during the lockup period of one year after listing.

Q. Where is the price at now?

Despite its big debut, the stock suffered a downfall in the following days. On Tuesday, the stock closed at 182,500 won, more than 30 percent down from Thursday’s starting price.

Many institutional investors and foreign nationals are selling heavily as they seek short-term profits. Analysts say more falls seem inevitable when the lockup period ends in the coming months.

Q. What are the future risks?

Big Hit’s heavy dependence on BTS, whose valuation cannot be exactly equated into numbers, is considered a key risk for the company’s business expansion. In the recent three years, the single group made up almost 90 percent of the company’s total revenue.

The enlistment deadline is also approaching for the seven bandmates. A law revision is under consideration to allow pop artists to delay their mandatory military service for up to two years.

Q. What are the opportunities?

There’s no sign of BTS slowing down. The group’s latest single “Dynamite” was a huge success, topping the Billboard Hot 100 chart for the first time as a South Korean act. Despite their canceled world tour, the latest two-day virtual concerts have attracted almost 1 million viewers around the world and ticket sales are estimated at about 50 billion won.

Expectations are already high for the group’s upcoming album “BE (Deluxe Edition),” which is set to be released Nov. 20. Rookie group TXT is also gearing up for a return next week with a new album.

The firm recently completed the acquisition of smaller rival Pledis Entertainment, home to Seventeen and Nu’est.