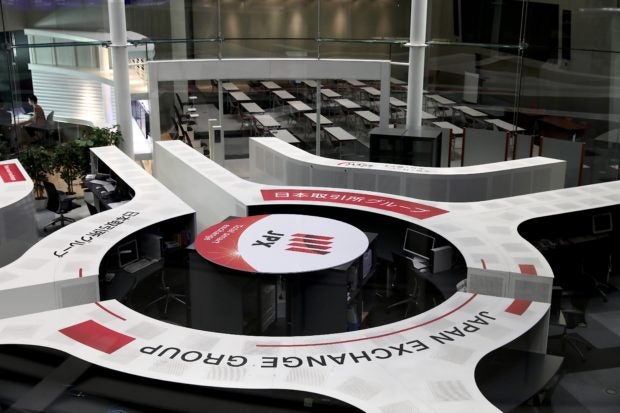 An employee of the Tokyo Stock Exchange works at a desk (L) at an empty trading space where trading was halted due to a glitch on the market in Tokyo on October 1, 2020. (Photo by Behrouz MEHRI / AFP)

HONG KONG, China – Concerns about the reimposition of virus lockdowns, stalled vaccine trials and dimming hopes of new US stimulus any time soon weighed on most Asian markets Thursday.

Regional investors tracked another sell-off in New York, where all three main indexes turned negative after Treasury Secretary Steven Mnuchin warned that while talks continued, Republicans and Democrats were still “far apart” on a rescue package.

While the broad view is that a new spending package will get passed eventually, the comments reinforced expectations that there will be nothing before next month’s presidential and congressional elections.

“This has been an ongoing drama,” Paul Nolte, at Kingsview Investment Management, said. “The latest twist I heard is nothing is going to get done until the election. That’s why I think you’re getting the market selling off a little bit.”

However, analysts said traders were taking comfort from the possibility that Joe Biden and the Democrats will win the White House and both houses of Congress, paving the way for a bigger stimulus than anything that could be agreed before the vote.

Adding to the downbeat mood on trading floors is the surge in coronavirus infections in Europe, which is forcing governments to revert to tough containment measures that observers fear could deliver a blow to a tentative recovery from national lockdowns earlier this year.

France on Wednesday imposed a curfew in Paris and eight other cities — covering almost a third of the country’s population — for as long as six weeks, while Germany and Ireland also ramped up restrictions.

The moves follow a partial lockdown in the Netherlands and increasingly strict measures in Britain.

– ‘Rough winter’ warning –
The crisis comes after hopes for a vaccine were dealt a blow by news that Johnson & Johnson had halted advanced trials after a volunteer fell ill, while Eli Lilly paused work on a treatment.

“France, Spain, Italy, the UK, and Germany are all under pressure, and since the recent economic releases already showed worrisome trends, the contingent might be heading for a rough winter.”

Tokyo and Hong Kong suffered steep losses in the morning session, while Taipei, Singapore, Manila and Wellington were also in the red.

Seoul lost 0.7 percent, though shares in Big Hit Entertainment — the management agency of K-pop sensation BTS — more than doubled on their debut after the initial public offering was more than 600 times oversubscribed.

The pound was struggling ahead of a European Union summit where leaders will discuss post-Brexit trade talks, with Prime Minister Boris Johnson urging them to give ground or see Britain walk away with no deal.

While talks are stuck on fishing quotas and fair competition rules, EU officials say they believe an agreement can be found but do not recognise London’s Thursday deadline for a deal and say they will not make one “at any price”.