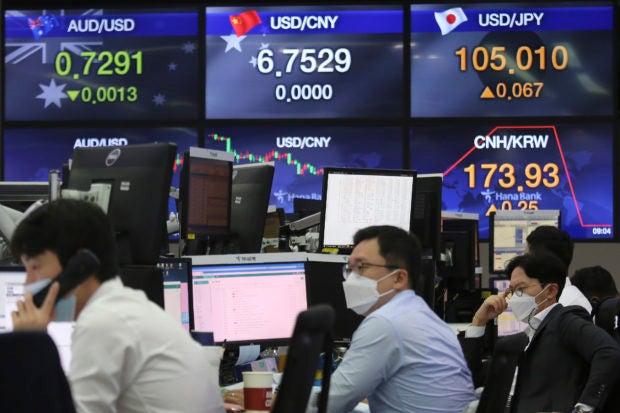 Asian stock markets declined Thursday after the U.S. Federal Reserve indicated its benchmark interest rate will stay close to zero at least through 2023 but announced no additional stimulus plans.

Wall Street’s benchmark S&P 500 index closed down 0.5% after the Fed said it won’t raise interest rates until inflation reaches 2%, which the U.S. central bank’s own projections show it doesn’t expect until late 2023.

Chairman Jerome Powell promised the Fed “we will not lose sight of the millions of Americans that remain out of work” but gave no indication of new stimulus.

Markets “hoped for the Fed to put policy money where the mouth is” but “ended up a tad disappointed,” Mizuho Bank said in a report. The Fed was “long on talk and short on action.”

Global markets have recovered most of this year’s losses, boosted by central bank infusions of credit into struggling economies and hopes for a coronavirus vaccine.

Forecasters warn, however, that the recovery might be too big and fast to be supported by uncertain economic activity.

U.S. investors are counting on Congress for a new support package after additional unemployment benefits that help to support consumer spending expired, but legislators are deadlocked on its possible size.

The Fed forecast the economy will shrink 3.7% this year, an improvement over its June outlook of a 6.5% drop. The Fed projected an unemployment rate at the end of the year of 7.6% instead of the 9.3% projected in June.

“A full economic recovery is unlikely until people are confident that it is safe to re-engage in a wide variety of activities,” Powell said.

In energy markets, benchmark U.S. crude oil for October delivery lost 28 cents to $39.88 per barrel in electronic trading on the New York Mercantile Exchange. The contract rose $1.88 on Wednesday to $40.16.

Read Next
Sy family still richest in PH
EDITORS' PICK
Cagayan gov endorses 10-day ECQ in Tuguegarao due to COVID-19 surge
Experience clearer calls nationwide with Smart VoLTE
No warrantless arrests despite DND-UP accord termination, says PNP spox
New Year, New Rediscoveries
Driving can be even more rewarding this New Year — here’s why
Biden team says US will not lift travel bans, despite Trump statement
MOST READ
Proposed toll for newly opened Skyway 3 ranges from P110 to P274
Duterte to firms: No franchise until you settle your accounts with gov’t
‘Hotbed of recruitment’: Lacson backs termination of UP-DND accord
Palace: Duterte’s ‘no payment of gov’t dues, no franchise’ remark covers all, even ABS-CBN
Don't miss out on the latest news and information.