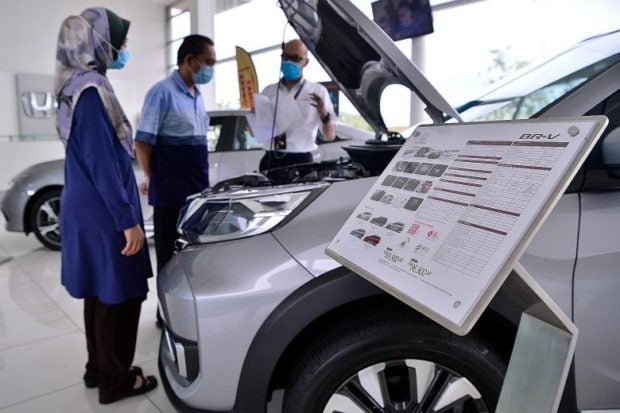 KUALA LUMPUR — Ms Elle Jeffry saved about 11 percent on the price of a new Perodua Bezza car last month, which she bought to replace her 12-year-old vehicle.

The clubhouse sales executive, who had spent more than two years contemplating whether to buy a new car, said the purchase was practical, given her fear of using Malaysia’s public transport amid the coronavirus pandemic.

“I’m glad that during this trying time, the government decided to step up and exempt car sales tax. Otherwise, I would have to rely on public transport throughout this outbreak since my previous car is not safe to drive around in anymore and super old,” Ms Elle, 32, told The Straits Times.

“I’m happy because, otherwise, my finances would allow me to buy a new car only at the end of next year,” she added.

She was not alone in rushing to car showrooms in the past 2½ months as the country’s Covid-19 movement restrictions were eased.

Vehicle buyers now enjoy a 100 percent sales tax exemption on locally-assembled models and a 50 percent waiver on fully-imported models. The sales tax waiver started on June 15 and will last until Dec 31 this year.

The tax exemption, rebates and pent-up demand combined to push up sales strongly, with 44,695 new vehicles sold in June, and rising to 57,552 vehicles sold in July despite the economic slowdown, data released by the Malaysian Automotive Association showed. This represented a nearly 5 per cent rise in car sales year on year for June, and a 13.2 percent rise for July.

Sales of Perodua cars jumped to 23,203 in July, triple its sales in May before the tax exemption, while Proton’s July sales figure was the highest in eight years. The two local brands are the most popular makes in Malaysia.

Malaysia imposed movement curbs on March 18, forcing schools and non-essential businesses to shut down. The movement control order (MCO) was eased on May 4, allowing most businesses to gradually reopen and for people to travel for work.

The impact of the shutdown on car sales was severe. Only 143 vehicles were sold in April, compared with 49,935 in the same month last year. With the easing of the curbs in May, sales improved to 23,309 units, but were still sharply below the 60,760 units sold in May last year.

Thirty-two-year-old businessman Vincent Yeong said: “I bought a Toyota Alphard in August and managed to save more than RM10,000 in sales taxes. I wouldn’t say I have ‘enough’ to survive for at least a year if there’s another MCO, but I treat the purchase as my bid to help my country with its economy.”

He declined to disclose how much he paid for his new car.

Still, those concerned about the economic outlook have taken advantage of the sales tax removal to downgrade to cheaper cars.

A survey by automotive news site WapCar found that over 90 per cent of Malaysians are concerned about taking public transport, with most opting to lower their budget for a car.

Sales executive Katy Chan said: “Honestly, there is so much uncertainty, so I think it’s best to make necessary changes when we still have the chance instead of waiting for the worst to happen first.”