Months into the pandemic, health-care workers are still getting infected with COVID-19, prompting a group of local manufacturers to inquire whether the government could have been importing cheaper but substandard personal protective equipment (PPE) from China and other countries.

The Department of Health (DOH) continued to import its PPEs such as coveralls and face masks, even after local manufacturers had developed their capacity to make affordable medical grade PPEs that could meet the demand of healthcare workers on the front line.

It was the government that called for their help. The Department of Trade and Industry asked manufacturers in March, at the onset of the pandemic, to repurpose their facilities in order to make medical grade PPEs.

Since then, five manufacturers with decades of experience in electronics and garment manufacturing sailed into unchartered waters — producing PPEs in the middle of a pandemic — and formed a new group called the Confederation of Philippine Manufacturers of PPE (CPMP).

After responding to the pandemic, the group now feels it was the government that fell short, when the DOH — through the Procurement Service of the Department of Budget and Management (PS-DBM) — continued to buy majority of its PPE requirements abroad.

“Now my question is this. Is the product that is in the market, be it a coverall or a face mask, with some Chinese paper certification, safe? I don’t know. No one knows because no one has tested [the products],” he said.

CPMP, on the other hand, had to get its products’ effectiveness tested abroad against COVID-19 by established international testing and certification companies since there is no local capacity for such tests. It also set up a “clean room” environment with an ultraviolet light chamber to sanitize its products.

“We know this and we see it on the newspapers. There is a certain percentage, a high percentage of our [frontline] healthcare workers [who] are getting sick of [COVID-19]. My question is, why? Are they being provided the right and the safe kind of PPEs that they deserve?” said De Los Santos.

“We know we can provide that. Now what is being imported, or [with] what is being bought, are you sure or are we sure that these are safe? My point there is it’s a question mark,” he said.

CPMP did not say that all these imports came from China alone.

However, China was the world’s largest source of respirator and surgical masks, medical goggles, and protective garments in 2018, according to Peterson Institute for International Economics (PIIE), a US-based independent nonprofit and nonpartisan research organization.

A New York Times report in July said China’s coronavirus response only added to that dominance as it increased production. The report also said that China exported 70.6 billion masks from March to May in 2020.

But regardless of the source of the imported PPEs, the main appeal aired by the CPMP during the press briefing is for the government to buy and support local products. 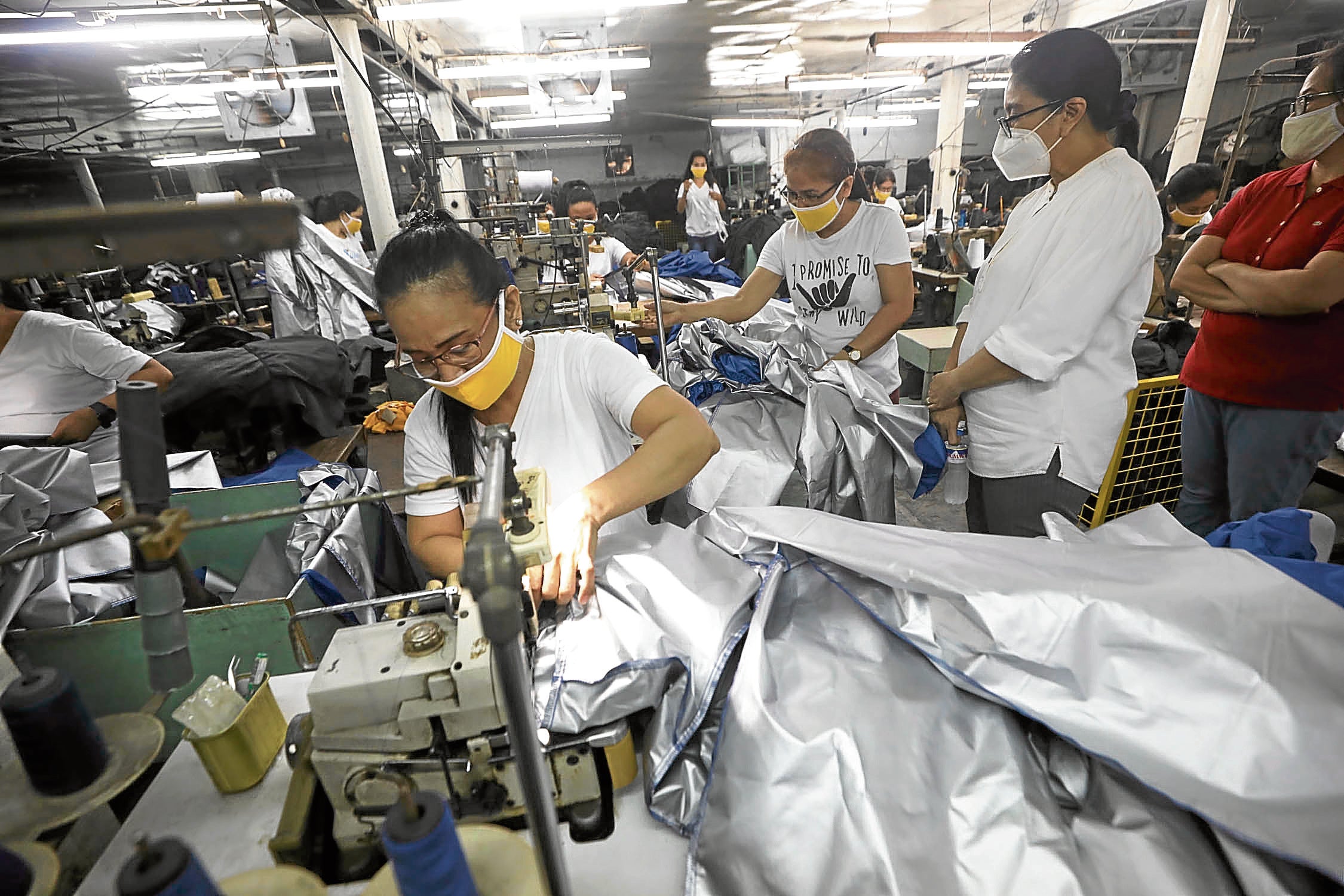 BUY LOCAL The Confederation of Philippine Manufacturers of PPE (personal protective equipment) is urging the government to buy more of its products like these coveralls used by health workers. —CONTRIBUTED PHOTO

In a statement, the DOH said that while it is thankful to the efforts of local manufacturers to ensure the country had enough supply of PPEs for medical front-liners, its role is limited to providing technical specifications.

“We would like to note that it is not DOH, but primarily PS-DBM that facilitates the procurement of PPEs and needed medical equipment,” it said.

CPMP said it could support the government’s PPE needs. Its officers said they could readily invest another $36 million and add 4,000 workers to increase their production capacity.

The irony, however, is the lack of local demand at a time when some hospitals still worry about running out of PPEs. Although CPMP has been trying to cater to the private sector and export market instead, De Los Santos said the government was still potentially their biggest and therefore most important market.

“The government is so big and can be predictable. It is something that allows us to scale up production whereas if we have to go to each individual hospital, they could be buying maybe 10,000 masks or 20,000 masks, [which would be too small] for us to amass a critical scale,” he said. “We need government demand to build the industry.”

He said the manufacturers were new to this industry and it was a challenge for them to produce and sell their products for both domestic and foreign markets.

“An immediate demand from the government help us secure our capacity and our employment at least in the short and medium-term,” said De Los Santos, who was also president of the Confederation of Wearables Exporters of the Philippines, CPMP’s parent organization.

He indicated that there was a disconnect in the group’s links to the government in that while it was in talks with the DTI, its main customer was supposed to be the DOH that makes purchases through the PS-DBM.

“That’s where we’re having issues,” he said.

“We prefer facts based on documents than grandiose, baseless statements,” he said in a Viber message to the Inquirer.

The PPE producers did not have the capacities that they now have when they started months ago. After nearly P2 billion or $35 million in investments, CPMP can produce 57.6 million medical grade face masks like KN95s and surgical masks monthly.

According to CPMP Vice Chairman Perry Ferrer, only around 10 million face masks a month are procured by the government from CPMP. However, the DOH’s demand hovers at a low of 30 million to as much as 80 million per month, he added.

CPMP now has the capacity to make 3 million medical-grade coveralls and isolation gowns monthly, none of them procured by the DOH. The group said it has been selling direct to the Philippine General Hospital and other hospitals instead.

With the help of the DTI, the CPMP has been pushing to get DBM to procure locally through the Bayanihan to Recover As One Act, or Bayanihan 2, which has mandated DBM to prioritize local procurement for medical-grade PPEs.

It remains to be seen if the measure would be enough for the DTI to convince another government agency to buy local.

Speaking at the same press briefing, Marjorie Ramos-Samaniego, governor of the DTI-attached agency Board of Investments, said she hoped that the Bayanihan 2 would be enough.

Ferrer said “it would be sad” if after Bayanihan 2 the group would still not get any procurement or support to buy CPMP products.

“All the cards are there—the best quality, Filipino. Everybody is saying buy local. There are all these slogans,” he said.

Ferrer, who heads electronics company EMS Components, recalled that when the DTI approached them for help, it was a call for action to help fellow Filipinos. He said the company gave it serious thought because the government “hardly asks for help.”

“It was an overwhelming yes on our part,” he said. —WITH A REPORT FROM JOVIC YEE