HONG KONG — International banks in Hong Kong are caught in the crossfire of competing laws enacted by the United States and China as the superpowers clash over the city’s future, with analysts warning businesses are being forced to pick a side. 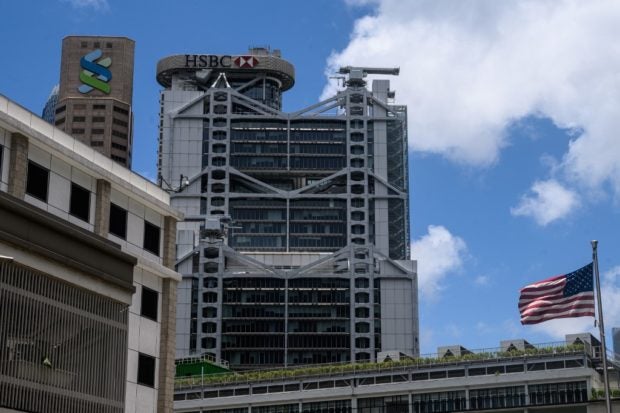 A US flag is seen hoisted outside the US Consulate building, with a view of the local headquarters of both HSBC and Standard Chartered  banks in Hong Kong on July 16, 2020. Beijing’s tough new security law and President Donald Trump’s order to rescind special trading privileges have blunted Hong Kong’s competitive edge and risk turning the finance hub into just another Chinese city, analysts warn. Photo by Anthony WALLACE / AFP

Lawyers working for the lenders have been busy. Their clients have grown increasingly alarmed by two pieces of legislation that came into effect last month that could radically alter how they do business in the semi-autonomous city.

The first is a bipartisan US bill sanctioning Chinese and Hong Kong officials responsible for the current crackdown on political freedoms in the city.

The second is a sweeping security law Beijing imposed on the finance hub that includes a ban on businesses complying with foreign sanctions.

That has left banks scratching their heads — how can they follow one law without breaching the other?

“We are very worried,” one banker with a major organization told AFP, asking to remain anonymous to speak freely.

The biggest concern was Beijing’s track record of punishing businesses deemed to step out of line, with the security law giving it powerful new ammunition.

“Most people in Hong Kong, especially in the banking industry, do worry that the… national security law is very vague and it can easily be interpreted to whatever agenda the government has,” he added.

Steve Tsang, director of the China Institute at London’s SOAS university, said businesses were only beginning to digest the predicament they face.

“It is a real issue and it applies not only to foreign banks but to all banks, companies, and international NGOs in Hong Kong,” he told AFP.

“If they are deemed to have violated the national security law they are vulnerable to prosecution by the Chinese authorities.”

The law has chilled political freedoms in Hong Kong, which was promised certain liberties and autonomy until 2047 under Britain’s handover deal with China.

The legislation bypassed Hong Kong’s legislature, its wording kept secret until the moment it became law.

China has said it will have jurisdiction over especially serious cases — toppling the legal firewall between the mainland and Hong Kong — and it claims the right to prosecute anyone in the world for national security crimes.

That has sent jitters through Hong Kong’s international boardrooms, even as local authorities say the new law will restore stability and won’t hamper business.

“(It) will not bring any changes to the fundamentals of our monetary and financial system,” Eddie Yue, chief executive of the Hong Kong Monetary Authority wrote on his official blog.

But Surya Deva, a business expert at City University of Hong Kong, says companies have diminishing faith in the assurances of Hong Kong authorities now that China increasingly calls the shots.

“The Hong Kong government is facing a ‘trust deficit’ of unprecedented nature: hardly anyone believes what it says, even if true,” he told AFP.

HSBC is the canary in the coalmine.

Europe’s largest lender builds its reputation on being a conduit between China and the rest of the world, making the majority of its profits in Asia.

But as geopolitics take a turn for the worse it has managed to upset both sides.

Politicians in the US and Britain have castigated the bank for supporting the national security law in Hong Kong.

But that hasn’t shielded it from criticism by Beijing.

The bank published a rebuttal on its Chinese Weibo account, which was quickly censored.

“The predicament faced by HSBC will spread as a result of the national security law,” predicted Tsang. “I am not sure any of them (banks) can be sure they will never get caught up in this, as US-China relations deteriorate.”

The anonymous international banker said companies would be reluctant to leave Hong Kong and would “try to juggle both nations” for as long as possible.

But Julian Ku, a professor of constitutional and international law at Hofstra University, said events may force their hand.

“The most likely result — if China is serious about enforcing their own provision of the national security law prohibiting compliance with foreign sanctions — is that the banks will have to pick the US or HK,” he told AFP.